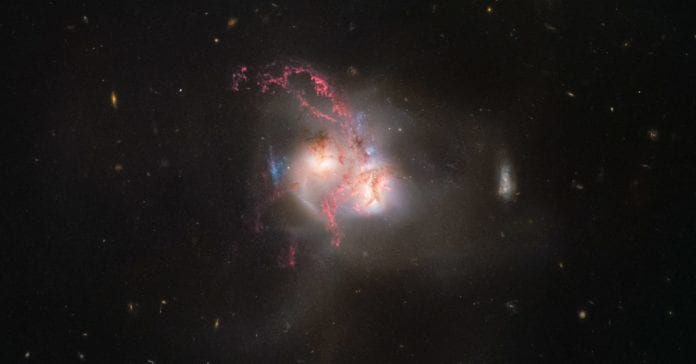 This is what it looks like when two galaxies collide. Those colorful bands of debris are gases being flung out into space as a result of this violent cosmic dance. Galaxy NGC 5256 contains both merging galaxies. Each contains its own galactic nucleus and in between the two is a supermassive black hole that’s quickly sucking up material from the impact.

This bright red star is called π1 Gruis and its bluish partner to the left is π2 Gruis. The European Southern Observatory’s Digitized Sky Survey snapped this photo of the space surrounding these stars. To the right, in bright blue, you can see the spiral galaxy IC 5201.

This glowing purple and blue image of a galaxy cluster called Perseus might help scientists solve one of the biggest mysteries in science: dark matter. To understand dark matter, scientists are trying to interpret new x-ray data from the cluster, one the largest objects in the known universe. The sudden jolts of intensity they’re observing might provide answers..

Hubble does it again! This photo is of galaxy cluster Abell 2163. One of the largest galaxy clusters on record, containing around 4,000 galaxies, Abell 2163 is also the hottest ever found. Scientists are studying the material jutting out from inside the cluster to better understand dark matter and phenomena like gravitational lensing.

A peep at our home galaxy is always heartwarming. In this dazzling image, the Milky Way arches over the Very Large Telescope. See those two bright smudges at the bottom? Those are the Large and Small Magallenic Clouds.