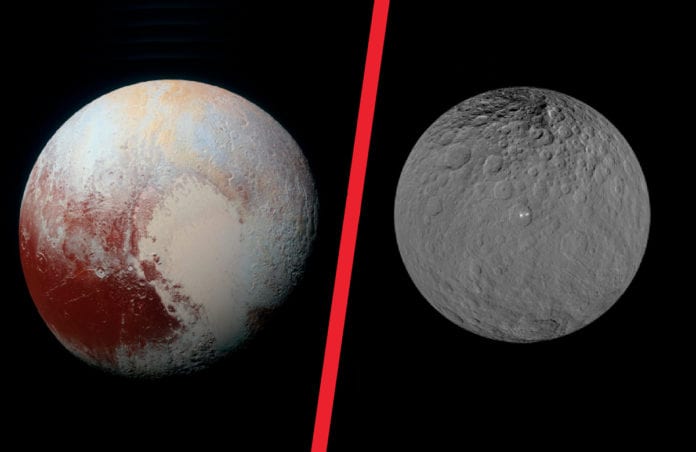 In all the early chaos, a thousand Plutos may have formed in the distant part of the solar system where Neptune orbits today, including a nascent Ceres. Then the shifting gas giants scattered those bodies everywhere. “In the great rearrangement of the solar system, Pluto went outward, Ceres came inward,” says planetary scientist and New Horizons co-investigator William McKinnon. He proposed Ceres’ migration in 2008 — the first hint of a potential sibling relationship between the two worlds.

It’s possible that Ceres could have formed near its current place in the asteroid belt, McKinnon concedes, but then it would be “a most unusual asteroid.” The dwarf planet alone accounts for about a third of the belt’s mass, and its icy interior distinguishes it from its rockier neighbors. Plus, recent observations on Ceres’ surface of ammonia (of household cleaner fame) also hint toward a more distant origin, to a time and place when such compounds were more common.

As for Pluto’s migration, Neptune probably managed the heavy lifting. When the ice giant spiraled outward, it carried nearby smaller icy bodies along with it, shepherding them toward the edge of the solar system. It’s just a twist of fate that Neptune carried away Pluto, while Jupiter and Saturn brought in Ceres.

The dwarf planets defied expectations when NASA’s spacecraft arrived. Instead of observing cold, dead blocks of ice, Dawn and New Horizons saw dynamic planets with signs of ongoing activity. Although water and ice should evaporate rapidly on Ceres, with its exposed surface, Dawn saw signs of ice in some of its craters. Pluto, far from the sun, constantly repaints its surface with new material, most likely liquids welling up from below and freezing on its surface.

Both worlds might also boast the same strange phenomenon: icy volcanoes spouting frigid lava. Ceres has only one mountain, a dome-like bulge about half the size of Mount Everest known as Ahuna Mons. Pluto has a pair of slopes in its southern hemisphere, informally named Wright and Piccard Montes. On Ceres, the ice is made up of frozen salt water and mud, but on Pluto, it’s probably ammonia. While “we think of ammonia like Mr. Clean and Windex, very liquid,” McKinnon says, at Pluto’s subfreezing surface temperatures, ammonia freezes into solid ice. “Once you get it that cold, it’s like honey or hot basaltic lava, so it will act more like lava,” he explains.

Desch and Marc Neveu, both at Arizona State University, model cryovolcanism on icy worlds. Neveu says a slushy mix would be driven to the surface of both planets “if the fluid has an extra push.” What could provide that push? Two potential scenarios: gas seeping from the liquid solution, like carbon dioxide escaping from an open soda can, and a pressure difference caused by the slow freezing of liquids.

Both worlds actually show recent signs of such oozing eruptions. On Ceres, the relatively smooth flanks of Ahuna Mons and the presence of water ice suggest material bursting forth from within. The strange texture of the plains around Pluto’s mountains suggests flowing lava. Scientists aren’t sure yet how active the volcanoes are today.