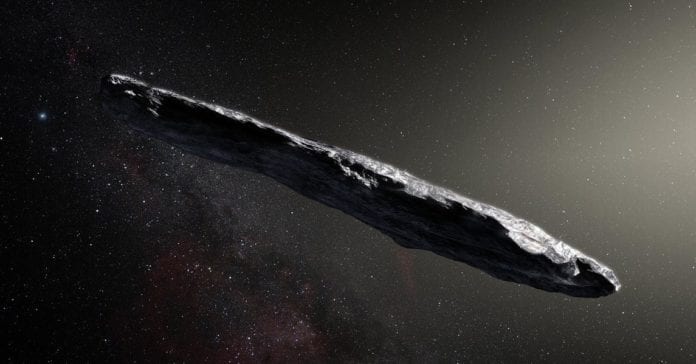 Last Wednesday, at 3:45 pm, scientists from the Breakthrough Listen project trained the Green Bank Telescope in West Virginia on ‘Oumuamua—the mysterious, oblong space-rock which last month became the first known object to enter our solar system from elsewhere in the universe—and scanned it for signs of intelligent life.

For six hours, astronomers interrogated the interstellar asteroid. Green Bank swept across four radio bands and billions of individual channels, searching for transmissions as weak as the signal from your cell phone. Signals that could indicate ‘Oumuamua is not just a rock but a spacecraft, with aliens—or alien technology—aboard.

By Thursday, astronomers had reported that their initial observations had turned up nothing. (Surprise!) If ‘Oumuamua is harboring extraterrestrial stowaways, they’re not producing a continuous signal across the frequencies Breakthrough Listen’s researchers have monitored thus far. But Listen’s scientists may have been onto something: Whether there’s life aboard or not, ‘Oumuamua kind of has the makings of an interstellar space vehicle.

Today in the journal Nature Astronomy, astronomers report observations that suggest ‘Oumuamua is encased in a dry, carbon-rich crust that could have protected a water-ice core from being vaporized as it made a close pass of our sun earlier this year. You can almost think of it as the hull of a spaceship.

Or, if you prefer another analogy: “Basically you have a really nice baked Alaska,” says Queen’s University astronomer Alan Fitzsimmons, who led the investigation. “A flaming baked Alaska of an object with a rather warm exterior, but with a gooey, icy mixture in the middle.”

Now, the researchers can’t say definitively that there is ice in ‘Oumuamua’s middle (let alone extraterrestrial life), but spectral observations performed by Fitzsimmons’ team suggest the object could have been icy long, long ago.

Different materials reflect light in different ways. By analyzing the spectrum that an object reflects, astronomers can see how the relative amount of light changes, and search for signatures of certain materials, like metals, rock, and ice.

Fitzsimmons’ team found that ‘Oumuamua’s material composition seems to resemble that of objects at the outer edges of our own solar system. Astronomers hypothesize that beyond Jupiter, objects are far enough from the sun to contain a lot of ice—including on their surfaces. Billions of years ago, when the biggest, outer planets were forming, many of those objects were flung outward. Some still orbit our sun at the fringes of our solar system, in a thick bubble of icy debris called the Oort Cloud. Others were probably ejected from our solar system entirely.

If other solar systems formed like ours, it stands to reason that any object flung from such a system would be icy, too. “That’s why we think it’s more likely to see an interstellar object formed from ice, not rock,” Fitzsimmons says. But when ‘Oumuamua passed by our sun, it didn’t behave like an object made of ice.

Oumuamua is the first known object to enter our solar system from elsewhere in the universe. This short video shows the interstellar asteroid moving against a backdrop of stars.

“That was a real surprise,” says University of Hawai’i astrobiologist Karen Meech, who has also published findings on ‘Oumuamua in recent weeks, but was unaffiliated with Fitzsimmons’ investigation. Researchers had assumed that the object would vaporize and emit microscopic particles, like a comet. “But many teams have looked very carefully, and there’s just absolutely no dust or gas coming off this thing,” Meech says.

To understand why, Fitzsimmons and his team turned to past research. They found that in the 1980s and 1990s, a lot of astronomers investigated what might happen to things like comets when you take them and place them into interstellar space for hundreds of millions, or even billions of years. What they found was that—like a delicious flaming dessert—those objects get baked.

Space is essentially a big radiation field with charged particles zipping all over the place. Astronomers call these cosmic rays. Previous research showed that those cosmic rays desiccate icy objects; the ice dries up, and the material that remains (typically carbon) bonds together to form a crust around the object. How thick that crust is, and how quickly it forms, isn’t totally clear, but Fitzsimmons estimates it would take about a hundred million years to form a crust half a meter thick. That might sound like a long time, but the upper limit for the age of ‘Oumuamua is 10 billion years.

Fitzsimmons’ team estimates that outer layer might have reached temperatures as high as 300 degrees Celsius during ‘Oumuamua’s closest pass of the sun, but that it would have provided enough insulation to prevent ice inside from vaporizing. Which raises the question: Could it have protected life inside the asteroid, perhaps waterborne microbes, from vaporizing as well?

I mean, technically? Yes. But Meech says that a far greater risk to microbial life would be the same cosmic rays that cooked ‘Oumuamua’s outside in the first place. Only if something were buried deep inside of the asteroid (say, at a distance of a few meters) would it be shielded from the harsh radiation of space.

“That’s if there are any microbes inside, and I’m not saying there are, and I wouldn’t suspect that there are,” Meech says. Not that she’s against searching the interstellar asteroid for extraterrestrial life—microbial or otherwise. Toward the end of our conversation, she refers back to the scientists with the Breakthrough Listen project and their ongoing interrogation of ‘Oumuamua with the Green Bank Telescope.

“I was very excited to see that experiment,” she says. “You know, it’s a long shot. This object is entirely consistent with being a natural object. But on the flip side, there’s nothing in the data that would allow us to disprove that it’s artificial. And if you don’t take the long shot and do the experiments with the radio, you’ll never know. And the payoff could be, potentially, huge.”