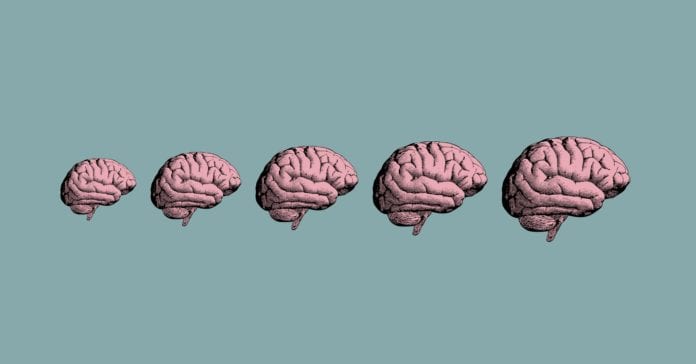 Your brain is one enigmatic hunk of meat—a wildly complex web of neurons numbering in the tens of billions. But years ago, when you were in the womb, it began as little more than a scattering of undifferentiated stem cells. A series of genetic signals transformed those blank slates into the wrinkly, three-pound mass between your ears. Scientists think the way your brain looks and functions can be traced back to those first molecular marching orders—but precisely when and where these genetic signals occur has been difficult to pin down.

Today, things are looking a little less mysterious. A team of researchers led by neuroscientists at UC San Francisco has spent the last five years compiling the first entries in what they hope will become an extensive atlas of gene expression in the developing human brain. The researchers describe the project in the latest issue of Science, and, with the help of researchers at UC Santa Cruz, they’ve made an interactive version of the atlas freely available online.

“The point of creating an atlas like this is to understand how we make a human brain,” says study coauthor Aparna Bhaduri. To do that, she and her colleagues analyzed not only how gene expression varies from cell to cell, but where and at what stages of brain development those genes come into play.

Crucially, the researchers performed that analysis at the level of individual brain cells—a degree of specificity neuroscientists have struggled to achieve in the past. That’s huge, in part because it gives researchers their clearest picture yet of where and in which cells certain genes are expressed in the fetal brain. But it also means scientists can begin to characterize early brain cells not according to things like their shape and location (two variables that neuroscientists have long used to classify cellular types and subtypes), but by the bits of DNA they turn on and off. As developmental neurobiologist Ed Lein, who was unaffiliated with the study, says: “This is not the first study in this area by any means, but the single cell technique is a game changer.”

Lein would know. An investigator at the Allen Institute for Brain Science (a key institutional player in the mission to map the human brain, and the home of several ambitious brain atlas projects from the past decade), he and his colleagues performed a similar survey of gene expression in developing human brains in 2014. To build it, they sliced fetal brain tissue into tiny pieces and scanned them for gene expression. But even after dissecting them as finely as possible, Lein says the cell populations of the resulting brain bits were still extremely diverse. Even a microscopic speck of gray matter contains a menagerie of functionally distinct cells, from astrocytes to neurons to microglia (though, to be perfectly frank, neuroscientists aren’t even sure how many cell types exist).

“When we measured the genes in our samples,” says Lein, “what we actually saw was the average output of all the cells in that sample.” When they were through, Lein and his colleagues had mapped the location and activity of some 20,000 genes in anatomical regions throughout the brain. But they still didn’t know which individual cells those genes came from.

UCSF’s new brain atlas doesn’t span as many regions as the Allen Institute’s (not yet, at least), but what anatomical areas it does covers it does with much greater specificity. “The difference between previous studies and ours is the difference between a smoothie and a fruit salad,” says study coauthor Alex Pollen. “They have the same ingredients, but one mixes them together and the other looks at them individually.”

The UCSF researchers focused on regions of the developing brain that eventually become the basal ganglia, which helps orchestrate things like voluntary motor control, and the cerebral cortex, the largest region of the mammalian brain and the seat of many human cognitive abilities. By examining the expression of individual cells from 48 brains at various stages of development, the researchers were able to trace a handful of genetic and developmental patterns to 11 broad categories of cell—and make a number of unexpected observations.

“One big surprise is that region-specific neurons seem to form very early in the developmental process,” says neurobiologist Tomasz Nowakowski, who led the study. That includes neurons in the prefrontal cortex, whose formation neuroscientists have long theorized to be influenced by sensory experience. But the new atlas suggests those areas begin to take shape before sensory experiences even have a chance to take place. That’s the kind of finding that could fundamentally alter neuroscientists’ understanding of the structure and function of adult brains.

The project’s other takeaways are too numerous to list here. But that’s the thing about brain atlases: They’re great at generating questions. “These things are foundational,” Lein says. “The reason these atlases are valuable is you can do a systematic analysis in one fell swoop and generate 10,000 hypotheses.” Testing the hypotheses generated from this latest atlas will hinge on researchers’ ability to access and add to it, which is why Nowakowski and his colleagues collaborated with UC Santa Cruz computer programmer Jim Kent to visualize their database in an interactive, online visualization.

Researchers will also want to cross-reference this atlas with similar projects. After all, there’s more than one way to map a brain. You can classify its neurons by shape, location, or the genes they express. You can map the gene expression of old brains, young brains, and brains of different species. A recent project from the Allen Institute even classifies neurons according to their electrical activity. Brain atlases are like puzzle pieces that way: The more you have to work with, the easier it is to see the big picture—and how all the pieces fit.