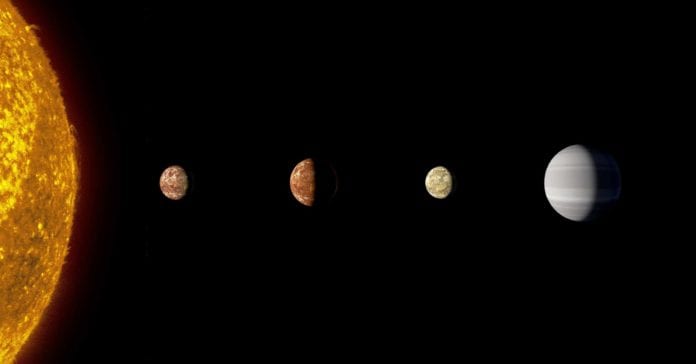 Saturn’s rings sure are pretty, and Matt Damon’s been to Mars, but our eight-planet solar system may not be that special after all. Today, scientists using data from NASA’s Kepler spacecraft announced they’d discovered an eighth planet orbiting a star 2,500 light years away. They’ve named the planet Kepler-90i after the star it orbits, Kepler-90, which is slightly hotter and more massive than our sun. “This discovery of an eighth planet ties Kepler-90 with our own solar system for having the most known planets,” said NASA astrophysicist Paul Hertz during a press conference about the discovery.

Researchers found the exoplanet by re-sifting through four years of data from a Kepler instrument called a photometer, a machine that measures the brightness of stars. Between 2009 and 2013, Kepler took pictures of 200,000 stars every half hour, about 10 pixels per picture. If a star dims and brightens in a repeating cycle, that could mean a planet is orbiting it. And depending on how gradually it dims and how quickly it brightens, you can infer information about the length of its orbit and the size of the planet.

But the signs of Kepler-90i didn’t just jump out at them. The secret to their success: a neural network trained to identify exoplanets, developed by University of Texas at Austin astronomer Andrew Vanderburg and Google software engineer Christopher Shallue.

Shallue came up with the idea. A mathematician by training, he had never worked in astronomy—but he’d read Human Universe by Brian Cox. “One thing the book mentioned was that in astronomy, our ability to collect data is growing much more rapidly than our ability to manually examine the data,” says Shallue.

In fact, just a few years ago, exoplanet-hunting astronomers would still sort through Kepler’s data by hand. Kepler did have a partially automated process that could filter out egregiously exoplanet-less pictures, but eventually, astronomers would have to pull up the remaining data on their computer and decide whether they could see anything interesting. The automated process couldn’t even distinguish an exoplanet from two orbiting stars—an “eclipsing binary.”

“It probably took half an hour to thoroughly vet one of those signals,” says astronomer Susan Mullally of the Space Telescope Science Institute, who helped develop sorting algorithms for Kepler that predate Shallue and Vanderburg’s neural network. When Mullally worked on Kepler data, the automated program gave her 32,000 potential exoplanets—of which 4,000 were eventually confirmed using Mullally’s algorithms.. “No one astronomer wants to look through 32,000 signals,” she says.

Shallue thought machine learning could help. He cold e-mailed Vanderburg with his idea. “I found his name by just doing Google search of people who had been discovering exoplanets,” says Shallue.

They developed a neural network, not unlike the kind that can auto-tag your dog in a photograph, and trained it with 15,000 astronomer-confirmed exoplanet signals. It actually took Shallue two weeks to download all the training data from NASA’s website. “The dataset was too large to fit onto my desktop computer at work, so I had to periodically download parts of the dataset, upload it to the cloud, and delete the part that I downloaded,” he says. Then, they gave the neural network a binary task: to tell them which files in Kepler’s terabytes of data contained exoplanets.

Then they decided to take a closer look at 670 stars with known exoplanets other researchers had already studied, searching for weaker signals others might have missed. And that’s how they found Kepler-90i.

The new exoplanet is the smallest in its solar system, and—just like Earth—the third-closest to its star. While the surface of the exoplanet is rocky, it’s also a scorching 800 degrees Fahrenheit on the surface, comparable to Mercury. Kepler scientists found the other seven exoplanets in the Kepler-90 system back in 2013. The eight planets orbit more tightly around their star than in our solar system, but they could have started off further away and migrated closer, Vandenburg said during the press conference.

Vanderburg and Shallue will continue polishing the neural network to look for more exoplanets. Vanderburg thinks that as they sift through more of Kepler’s data, they’ll find more solar systems of a comparable size. “When I think about this, I start to wonder, is an eight-planet system like our own solar system really that extraordinary?” he said during the press conference. With 200,000 stars’ worth of data to study, we can look forward to more significant confirmation of our insignificance.

Resolutions Of Tech Companies For 2012 [Humor]

First North Carolina Got a Hurricane. Then a Pig Poop Flood....