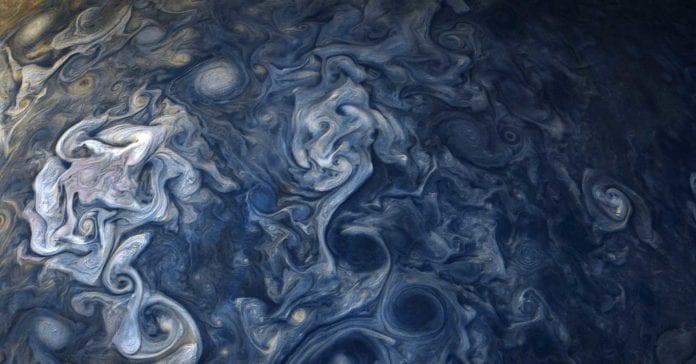 Take a look at this cool space trash can! Seen here is the Cygnus cargo ship, docked with the International Space Station at sunrise. See that eerie blue glow to the right? That’s the curve of the Earth, its atmosphere illuminated by the sun. Cygnus arrived at the station on November 13 carrying supplies and scientific experiments to keep the crew going. After it docks however, it is reloaded with 6,200 pounds of trash accumulated over a few months from the six crew members. When it’s full it is sent back down to Earth where it burns up in the atmosphere. The crew released Cygnus from the station on December 6, and it will remain in orbit until the 18th when its engines fire twice, pushing it back towards Earth.

Welcome to Abel 2537, a cluster of galaxies so dense and massive they have warped the very spacetime around them. The bending of these galaxies is actually the light traveling from the source all the way to Earth. As the light travels from each galaxy around the dense cluster, it highlights objects we might not otherwise see, like these galaxies. By studying clusters like Abel 2537, scientists can test out Einstein’s theory of relativity and learn more about the nature of spacetime itself.

This quadriptych photo features four of the larger asteroids from the belt between Mars and Jupiter. The Very Large Telescope’s Sphere (Spectro-Polarimetric High-contrast Exoplanet REsearch) instrument captured these four asteroids, but there are millions of others just like them. Clockwise, these are 29 Amphitrite, 324 Bamberga, 2 Pallas, and 89 Julia. 2 Pallas is the third largest asteroid in the asteroid belt—so large it was once classified as a planet.

These mesmerizing blue and white swirls are giant cyclones and storms that roar in the upper atmosphere of Jupiter. This false color photo, taken with the Juno spacecraft, highlights the structure of these storms in gorgeous detail. Mind not blown enough? The scale here in this small Jovian snapshot is a whopping 7.75 miles per pixel. They don’t call them gas giants for nothing!

An astrophotographer in Pennsylvania managed to capture the International Space Station transiting the almost-supermoon on December 2. It’s seen here as a tiny blip (it almost looks like an insect!) on the upper right of the moon.

Opportunity, the rover that never stops, took this composite photo of the floor of Perseverance Valley on Mars between October 13 and October 20. Scientists think the scratches in the rocks there may have been formed by Martian winds blowing from right to left as well as up and out of the crater.