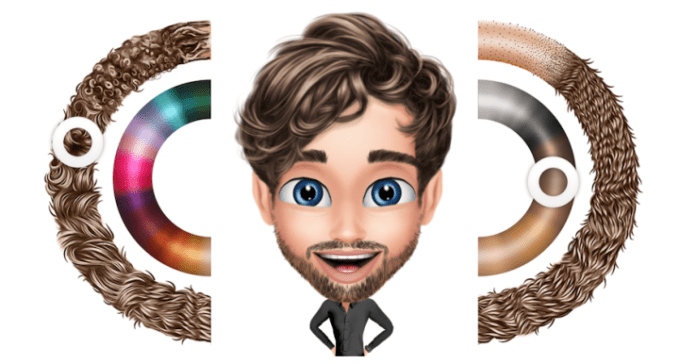 “We plan on making Bitmoji obsolete,” says Akash Nigam, CEO of Genies. Bragging about beating one of the world’s top apps before his has even launched is emblematic of Nigam’s and Genies’ brash style. But with $15 million in funding at a valuation over $100 million, top investors like NEA and Hollywood royalty like CAA are buying into the avatar startup. It already has 680,000 kids waitlisted to sign up for the Genies iOS app that launches today.

“If, God forbid, Donald Trump bombs North Korea, you’ll see your Genie riding a nuke to North Korea,” says Nigam. Whether that idea makes you giggle or roll your eyes, this is Genies’ plan “to be the next BuzzFeed,” the 24-year-old CEO tells me. “Your Genie is the star of the show. The script is whatever happens in the world that day.”

It all starts with customizing your big-headed, photorealistic Genie avatar. While Snapchat-owned Bitmoji look like a comic strip, Genies are closer to Pixar. First you’ll select a personality type that determines some of the scenes you’ll see, based on clouds of brands like Coachella, BuzzFeed and Supreme for cool kids, or TechCrunch and the BBC for techies. Then, using the Genies trait selector wheels, you can quickly scrub through tons of options for a dozen characteristics, like face shape, hair and eyes. Finally, you’ll outfit your Genie in clothes ranging from generic shirts to popular brands.

Genies sends you 10 to 15 animated scenes throughout each day that are around 10 seconds long and feature your avatar. They include quirky little situations for holidays like Christmas, cultural staples like hungover-Sundays and ones based on the top daily news for your personality type. Human editors review the scenes for factual accuracy, coherence and humor, and can tweak them before they’re sent out. Typically, new scenes will arrive quietly in the Genies app, with notifications reserved for huge breaking news or batched digests of updates. 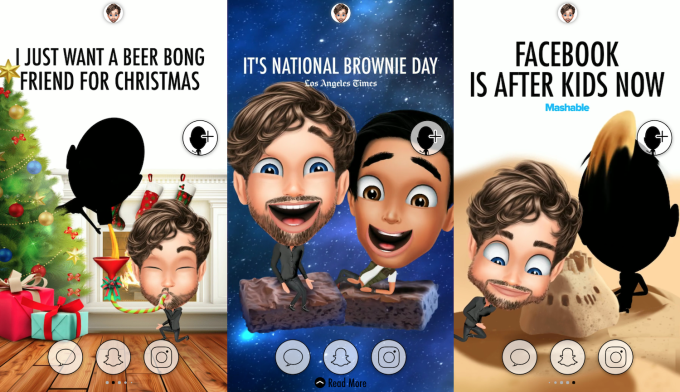 Nigam says Genies taps more than 1 million sources with a focus on reputable news outlets to figure out what’s trending as early as possible. He claims that Genies’ art team and AI have built millions of pre-designed creative assets, and that the AI can actually piece them together to automatically create the animated scenes. If all the blogs are reporting Elon Musk’s plan to colonize mars, then it will cobble together space, stars and Elon himself to show your Genie rocketing to the Red Planet alongside the headline.

You can swipe up to read the top source article for the news. But what Genies really encourages is you messaging the video scenes to friends via other apps like Instagram Direct, Facebook Messenger or Snapchat. “Everyone has Giphy, but they use it everywhere else. Exact same thing with us,” Nigam tells me.

The idea is to leverage vanity to make the news seem interesting and shareable, and deliver it through a social app instead of a traditional media publisher. “At our age, we get the majority of our news from Twitter, Snapchat or Instagram.” And for added virality and personalization, many scenes include an empty silhouette you can fill with a celebrity of your choice, like Trump or Kylie Jenner, or insert a friend so you act out the scene with your buddy. If Facebook taught us anything, it’s that people will always open a notification if they get tagged in an image. 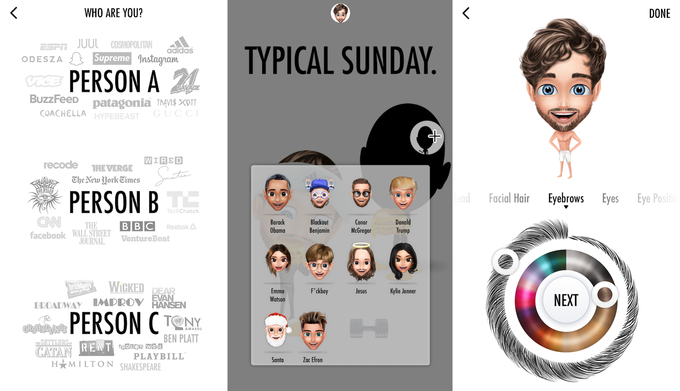 Overall, the Genies look great, with much more nuance than you see in alternatives with either fewer customization options or that rely on facial detection. Nigam says he’s not a believer in technologies for automatic avatar generation, saying that even small inaccuracies can be jarring, and testers enjoyed the personalization process. If Genies just released an emoji keyboard with the avatars so you could use them anywhere, it could prove popular.

But the animated scenes are often gimmicky, crass or even offensive. Over a few days of testing, I saw ones advocating for beer bonging, pot brownies, study drugs like Adderall and pouring crappy vodka into Grey Goose bottles to save money. Nigam defended the content, saying these were “party-oriented” for a “young demo where they share and learn through the lens of pop culture.” Others like “Wanted: Holiday Bang Buddy” might be too lewd even for college kids. And one even parodied the important NFL protests of racism and police brutality, featuring students “taking a knee” to get out of a pop quiz. That should never have made it past the human editors. 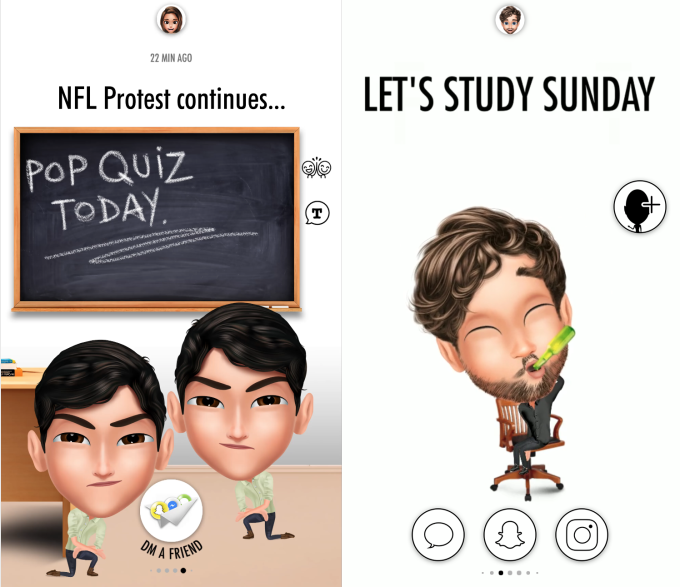 Those that weren’t worrisome often felt mediocre, like showing two avatars building a sandcastle to represent an article about Facebook launching the Messenger Kids app. Your Genie runs across the screen dropping bitcoin before someone bursts the bubble in one of today’s scenes. Perhaps the best one I saw was a mock-up for what Genies could have sent after the Las Vegas mass shooting tragedy that encouraged people to read a Newsweek article about how to give blood.

As a social app, the avatars are too contorted into specific situations for general use, and as a news reader, it feels haphazard and inefficient. The team has a powerful idea, and the graphics are pretty, but the execution on the content needs work.

“We did a bunch of apps, and they sucked,” Nigam says about previous products his team built before Genies. “We’d think they were gonna blow up and there’d be 16 users.” Born and raised in Silicon Valley’s Mountain View, Nigam is the kind of guy who’s been dreaming of launching his own app since he was old enough to be allowed to use them. 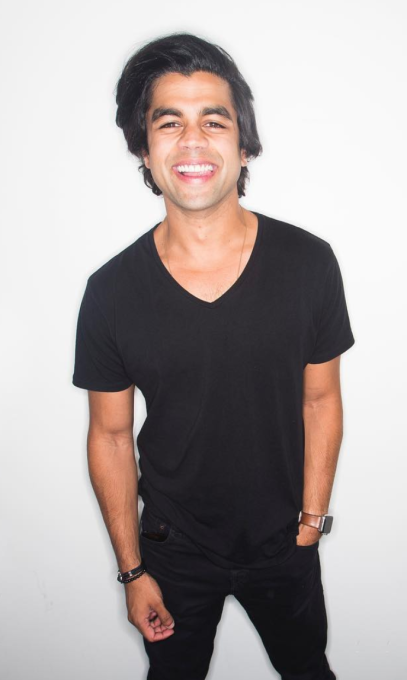 He met his co-founders during hackathons while studying computer science at University of Michigan. They raised a seed round and built a failed group chat app called Blend while working out of a tiny room attached to a mosque in San Jose. They had a weak exit opportunity for Blend and turned it down. Seeing Bitmoji hover around App Store No. 1 for years convinced them there were greater riches in the avatar space.

They see plenty of revenue opportunities in Genies, which could easily do product placement and sponsored content in its animated scenes. “Your Genie doing a Gatorade shower,” Nigam suggests. “We can monetize any time we want to turn on the spigot.” The startup also plans to let you buy the clothes you put on your Genie, or even get your avatar plastered on custom merchandise. “Brands get really fascinated by the wheels. We could do an entire Supreme wheel,” he explains, referring to the trendy urban fashion wear line.

Now the company has Silicon Valley and LA offices, plus engineering in Bucharest. “We take kids from the streets into our office every day for testing,” says, noting San Francisco doesn’t always know what’s hip. The startup spent the summer on an aggressive college marketing campaign, with tons of scantily clad models wearing Genies merchandise and signs asking the company to “Make My Genie.” All those waitlist sign-ups could help it score some traction today. 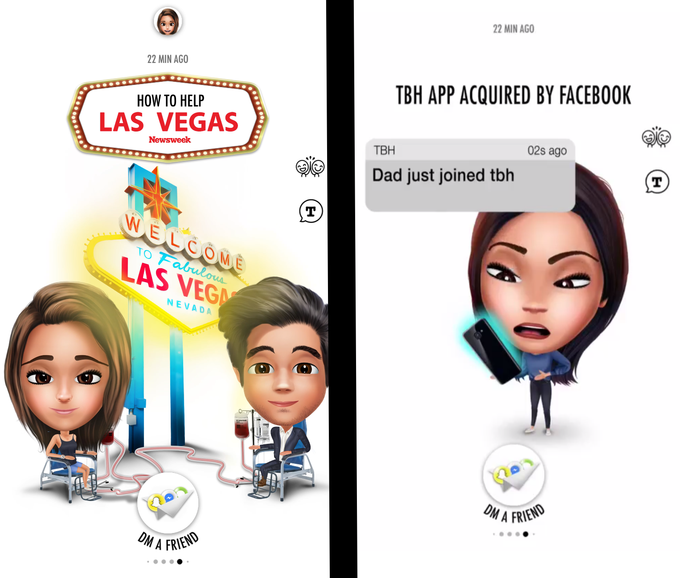 When asked about what he’d do if Snapchat’s Bitmoji started acting out the news too, Nigam fired back that they’d “force you to live inside Snapchat itself” rather than share elsewhere. And just to dig the dagger a bit deeper, he said, “They’re a trend that may have already reached its peak.”

Perhaps I’m showing my age by being put off by some of  the content. Nigam boldly states “We don’t really trust people in product unless they’re actively talking to teens all the time.” But being a news publisher, even one that looks nothing like the rest, can be more complicated than it seems. Snapchat has had to go to great lengths to teach news outlets how to make Discover channels for Gen Z. And Facebook is reckoning with how much damage can be done with fake news.

Genies has a ton of potential. The idea of a mini-you visually depicting the news is fun, and piggybacking on other messaging apps instead of trying to build another feed is wise. Still, the content feels rushed and half-baked at times, and could either fail to entice users or be too thin to persist as more than a fad. It has plenty of money and connections to find the talent necessary to improve the scenes, though. And if the avatars become something everyone wants, that could be enough in the meantime.