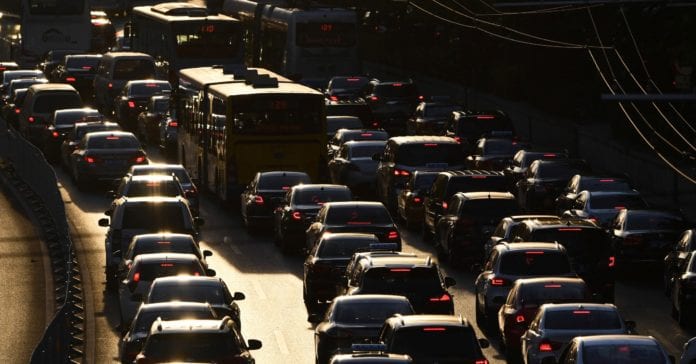 Ah, the phantom traffic jam. You know, that thing where the flow suddenly slows to a halt and you inch forward for a half hour and then things pick up again and you look around for an accident or construction or anything at all for Pete’s sake that might justify the time you just wasted. But no, nothing. It’s as if the fates chose this particular time and place to screw with you.

The question is, why? People tailgating and bunching up, maybe. But a new study in IEEE Transactions on Intelligent Transportation Systems mathematically models the implications of the larger problem: You’re not keeping the right distance from the car behind you.

That may seem counterintuitive, since you don’t have much control over how far you are from the car behind you—especially when that person is a tailgater. But the math says that if everyone kept an equal distance between the cars ahead and behind, all spaced out in a more orderly fashion, traffic would move almost twice as quickly. Now sure, you’re probably not going to convince everyone on the road to do that. Still, the finding could be a simple yet powerful way to optimize semi-autonomous cars long before the fully self-driving car of tomorrow arrives.

Traffic is perhaps the world’s most infuriating example of what’s known as an emergent property. Meaning, lots of individual things forming together to create something more complex. Emergent properties are usually quite astounding. You’ve probably seen video of starlings forming a murmuration, a great shifting blob of thousands upon thousands of birds.

Bats flying en masse out of a cave is another example, swarming sometimes by the millions through a small exit. And scientists are just beginning to understand how they do so. “The assumption is that they’re actually aware of bats all around them, not just in front, and that’s why hundreds of thousands of them can come out of a very narrow cave and not collide,” says study co-author Berthold Horn of MIT. Keep in mind that bats not only echolocate to build a map of their surroundings, but can usually see pretty well too.

When you’re driving down the highway, such grace eludes you. You’re locked onto the car ahead of you, and rightfully so—that’s the agent most likely to ruin your day if it suddenly stops. But optimally you’d be keeping an equal distance between yourself and that car, and yourself and the car behind you. This is known as bilateral control.

“This is what happens when you have a control system that is simply trying to keep up with the vehicle in front,” says Horn. “And its job is not to make the world better, to have hundreds of cars moving in unison. It’s very myopic.” Copy-paste this inefficiency across the highway and you start to create an emergent property of misery. And really, you shouldn’t blame yourself. A human behind the wheel simply doesn’t have the capacity to constantly calculate both the distance forward and the distance back.

But technology certainly does. Some cars already come with adaptive cruise control that automatically follows the car ahead at a safe distance. So why not also add the sensors to the back of the car as well? That way the machine can achieve equidistance on its own.

Problem is, we’re talking about an emergent property here. “To get the full benefits of this, a significant fraction of the cars would have to have this,” says Horn. “In terms of societal implementation that’s a big factor, because even if it’s relatively cheap, people who implement it will question whether the first car that gets it is worth that investment, because until other cars get it, it doesn’t do a whole lot of good.” After all, if only one starling in a flock can position itself properly among its neighbors, things will get messy. It could even put the early adopters at a disadvantage, since opportunists might jam themselves into that gaps in traffic that have opened up. That’s not playing very nice.

Interestingly, bilateral control may be a more immediate way to essentially replicate vehicle-to-vehicle communication, the idea that one day cars on the road could use a common system that would give them information about where to all be. That would of course require all the cars to speak the same language. But with adaptive cruise control looking both ahead and behind, automakers might more smoothly transition into this kind of organization. Keep upgrading new models with the ability, and the system gets better and better. An ideal property emerges.

And Horn doesn’t think this technology will be a hard sell for carmakers. For one, it’ll make driving safer, and consumers like safety. That and it’s a more comfortable way to travel—less herky-jerkiness.

Hell, if the consumers ain’t buyin’ it, the feds might mandate it. “It sounds pretty drastic, but the benefits are huge,” says Horn. “We’re talking about a potential doubling of throughput, huge decreases in CO2 emissions, a lot of aggravation reduced and fuel used.”

So, fellow drivers, let us drive like bats and starlings, not eagles.