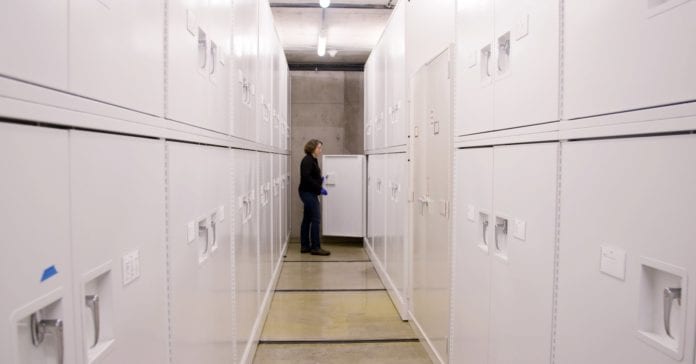 At San Francisco’s California Academy of Sciences, there’s no shortage of natural wonders. You can visit a dome-encapsulated rainforest, observe the dizzying jellyfish in their tanks, or ponder a wave of sea lion skulls stuck to a wall. But those skulls are really just a taste of what the place has to offer. This is no static natural history museum—it’s a place where living, breathing science happens. Well, sort of.

Behind keycard-secured doors lies a labyrinth of staff offices, labs, and environmentally-controlled storage that houses 98 percent of the museum’s 46 million specimens—mostly dead. A small fraction will ever appear in public. The rest are an indispensable resource for scientists the world over, which means the museum goes to great lengths to meticulously preserve them.

Moe Flannery is the collections manager of the ornithology (birds) and mammalogy (self-explanatory) department. Flannery oversees the collection of specimens from the field along their journey to the museum’s collection room. “I like to think of myself as a librarian,” Flannery says, “but instead of taking care of books, I take care of scientific specimens.”

Flannery’s stacks span rooms, with floor-to-ceiling drawers holding rows of bird skins, boxes of marine skeletons, and even a shelf of boulder-sized animal skulls. The academy began collecting these on expeditions in the latter half of the 19th century, and the museum has absorbed specimens from other institutions dating back even further. The Academy rarely launches such expeditions these days, and when they do they’re quite small—like a trip to the ocean’s “twilight zone” in 2015, whose reefs revealed some strange forms of life.

Instead, many of the Academy’s modern specimens come from salvage: birds that hit windows, animals found dead on roads, and sometimes interesting specimens from the zoo.

Preserving these specimens requires a team of curatorial assistants and volunteers. The aptly-named Bone Lab is where marine specimens are prepared. Buckets of varying sizes hold animals in various stages of decomposition. After muscle, tissue, skin and any feathers are removed, the animal goes into a bucket with water. As the specimen sits in its own juices, the bacteria in the water break down any remains that aren’t bone. For birds, a technician removes the insides, stuffs the specimen with cotton, and positions it to dry, a process that has changed very little since the 1800s.

If you’re lucky, you’ll eventually glimpse these specimens on the museum floor. Really, though, a natural history museum like this exists for the scientists. “It’s really important for scientific research collections to be housed in museums for researchers from all over the world to use,” Flannery says. “They are basically a record of an animal at a place and a time and they go back in history.” And the academy is just one of many specimen repositories scattered around the world. The public-facing bits of these museums are for education—and, of course, revenue.

So what can you do with millions upon millions of dead things at the academy? Well for one, in 2005, a researcher used DNA sequencing to identify and characterize two avian pox strains that manifested as lesions on the feet of finches collected during 1905 and 1906 expeditions to the Galapagos Islands. It was a finding a century in the making.

But a natural history museum can help define the future, too. Take, for instance, the case of the Lord Howe Island stick insect. Researchers (not affiliated with the academy) were able to compare DNA taken from museum specimens and DNA from a rediscovered population in the wild to confirm they were indeed the same species, even though they looked different. Armed with this knowledge, conservationists can safely introduce the insect to another island where it went extinct.

It’d be safe to say the naturalists of the 1800s, who began amassing collections like these, had no idea what was in store for their precious specimens. “We continue to build the collection of the museum not knowing what future researchers may want to ask, and making sure that they have the material to ask those questions,” Flannery says. “So it’s important to keep those specimens well prepared and well curated and well maintained over time so that they are available for that historical record moving forward in the future.”

Does it smell a bit? Sure, but sometimes science is about sacrifices.

What People Around The Web Are Saying About The iPhone 4S...

GizmoCrazed - October 12, 2011 0
Journalists from around the globe who were lucky enough to get their hands-on the new iPhone 4S have written some comprehensive reviews about the...

Elon Musk: ‘We need a revolt against the fossil fuel industry’

Hear how to build a brand from Tina Sharkey, Emily Heyward...