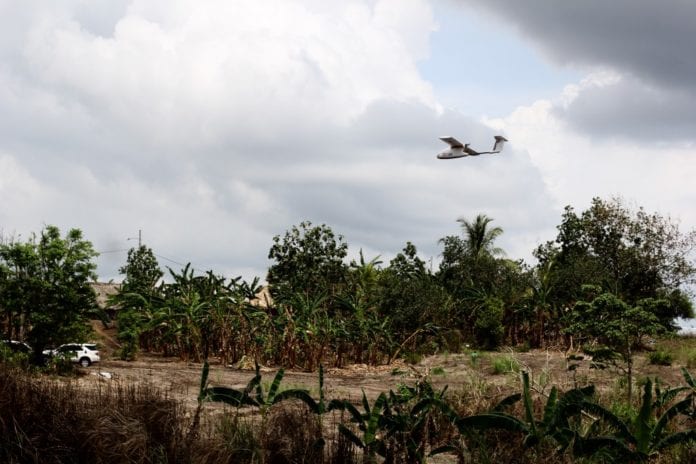 Indigenous tribes from the Pacific Northwest to the Amazon Basin face a similar set of challenges: How to manage their lands, defend against corporate encroachment and document historic and religious sites for future generations. Often working with limited resources, many indigenous groups are turning to drones to protect and preserve their traditional lands.

Many Central and South American countries have laws that, on paper, limit what companies can do on indigenous lands. But enforcement is hit-or-miss. To make their voices heard, indigenous tribes must go to the government with solid evidence that shows the land is theirs and laws are being broken.

Drones can help gather that evidence. In two separate programs, indigenous communities in both Panama and Guyana are using drones to help monitor deforestation, document their own land use, and fight illegal encroachment into their territories.

In Guyana, members of the Wapichan tribe ride motorbikes along bumpy forest roads, drones tucked safely inside their backpacks. They’re heading toward an illegal gold mining operation on the tribe’s land, where workers are clearing away the rainforest and allowing pollutants to run into the Wapichan’s water sources. The drone team will photograph the site from above, creating a mosaic of aerial photos that can be used to defend the tribe’s land in court.

The Wapichan tribe built its own fixed-wing drone in 2014 to patrol its territory from above. Gregor MacLennan, a program director for the nonprofit organization Digital Democracy, and tribe members relied on YouTube videos and online forums to help assemble the drone.

While MacLennan brought some tools and electronic components with him to Guyana, most of the drone’s body was improvised from materials in the village. In part, so the drone was repairable with whatever was on hand in the event of damage. The drone features a motor mount made of plastic cut from an old beer crate.

Since then, the Wapichan program has acquired a few Parrot Bebop quadcopters. And the program has already shown some results: In 2015, a Wapichan drone team spotted an illegal logging operation on the Brazilian border, where settlers often encroach. They also found evidence that the Marudi Mountain gold mine was leaking pollution into Wapichan water sources. 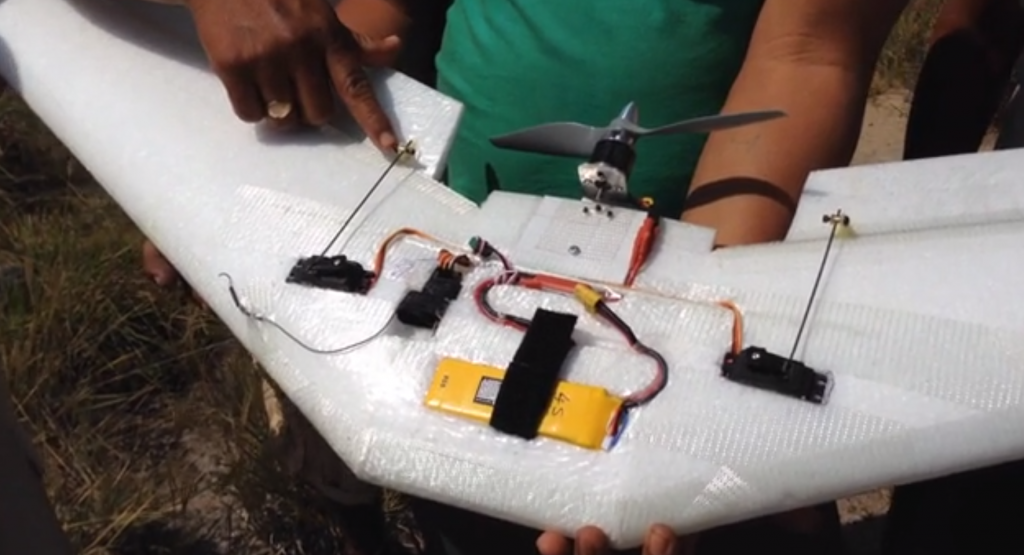 The Wapichan tribe built a fixed-wing drone with many items from the village. That way, it could be easily repaired if it it got damaged. (Credit: Digital Democracy/Gregor MacLennan)

Within the next year, the tribe’s drone team hopes to fly a mission every month or two. They especially want to focus on the mining area around Marudi Mountain, tracking its rate of deforestation.

Meanwhile, seven of Panama’s largest indigenous tribes—the BriBri, Buglé, Emberá, Kuna, Naso, Ngäbe and Wounaan—have teamed up with the United Nations (U.N.) program Reducing Emissions from Deforestation and Forest Degradation, or UN-REDD. Through this partnership, a combination of technology and local knowledge will help monitor indigenous lands and curb the trend of forest loss. Since February 2016, volunteers from each tribe have been learning to design flight plans, pilot drones and use aerial data to produce detailed maps of tribal lands. The first flight took off from the indigenous territory of Madugandí, near Panama’s northeastern coast, in April 2016.

Equipped with a smartphone app and GIS training from the U.N. Food and Agriculture Organization, which runs UN-REDD, volunteers from local indigenous communities on the ground look for freshly-cleared areas of forest—the calling card of mining, logging or ranching operations encroaching on tribal lands. Marking the GPS coordinates in the app flags the area for a drone mission so the three-person drone team can map and photograph the site from the air.

“After that, we move to the area, which sometimes is located quite far, about two hours away from a road,” says Rafael Valdespino, a trained drone technician from the territory of Emberá-Wounaan in Panama. The country’s rainy season makes ground surveys practically impossible for roughly six months, and can thwart even satellites, so the drones’ ability to cover remote areas from above makes them vital tools for forest monitoring.

“I encourage other indigenous communities to replicate this project and offer all our support,” says Valdespino.

Thousands of miles north, the 2016 standoff between indigenous activists and Dakota Access, LLC was in full swing. The two sides were at odds over construction of the Dakota Access Pipeline (DAPL), near the Standing Rock Reservation in North Dakota. The conflict provided a high-profile example of how indigenous filmmakers and photographers could use drones to document key events and raise awareness of their struggle to maintain land rights.

Drones were essential to the story at Standing Rock, capturing footage that drew national attention to Standing Rock and helped shape the unfolding narrative. But the drones also sparked tense encounters with law enforcement. The DAPL protest is one of the first major events where indigenous people were, in part, in control of the story. And that is significant, says Myron Dewey, a drone pilot, filmmaker, and member of the Paiute and Shoshone tribes.

Myron Dewey flew drones during the ongoing Stand Rock protests—he believes a drone of his was shot down by local police officers. (Credit: Myron Dewey)

“Being indigenous, it’s very important that we document our own stories, because for too long, our stories have been documented for us, and so it changes the narrative,” he says. “And because of the drones, I was able to do that.”

Drones also provided a layer of security and accountability for the protesters during the tense—and sometimes violent—confrontations with law enforcement and private security.

In August 2016, he says, “I documented two of the security that were harassing people going into camps, from 3 miles away.” And having “eyes always on the people” meant that the protesters had a heightened sense of accountability for their own actions, as well.

And the drone “was used ceremonially. It was smudged, it was blessed, it was sent up, it was taken care of, and it took care of us,” Dewey says.

Not Always A Struggle

Drones are also empowering indigenous groups around the world to make better-informed decisions about their own land management. From documenting the preservation of important historical and sacred sites to monitoring wildlife populations and land-use patterns, these tools give indigenous tribes greater autonomy—they don’t have to rely on outside agencies or groups to monitor their lands and make ecological decisions.

For instance, the drones patrolling Panama’s forests will eventually also help monitor forest fires, harvests from farmland, and the status of water sources. “The combination of land and remote sensing monitoring allows us to know the dynamics of loss, degradation, and restoration of forest cover,” says Valdespino. 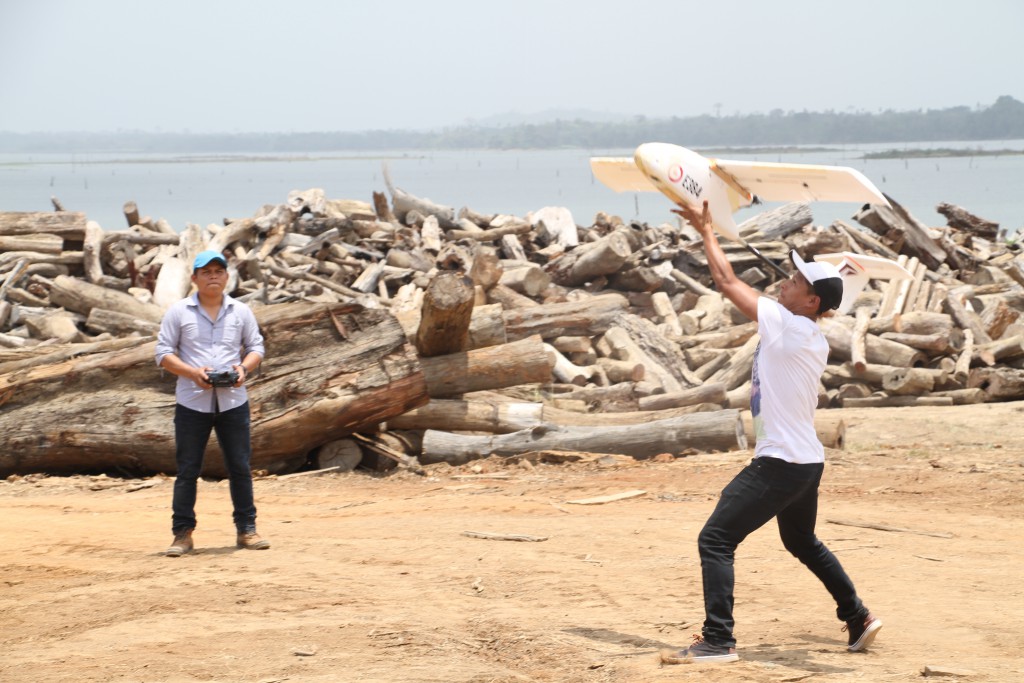 Rafael Valdespino, assisting the drone as it takes flight, and other drone technicians have used unmanned aircraft to monitor forests in Panama. Some have used data gathered from drones to help support land claims. (Credit: FAO Panama)

In Washington state, entomologist and Colville Confederated Tribes member Nathan Moses-Gonzales hopes to use drones for wildlife monitoring on the Colville Reservation. Previously, the Colville Confederated Tribes used a full-sized manned aircraft to conduct salmon research missions. But the areas surrounding canyons make it difficult for airplanes to get good views, so the tribe is looking to drones.

Dewey plans to return to a project he started before he brought his drones to Standing Rock, working with state officials to document Paiute and Shoshone historical and sacred sites from the air. “Our battle in Nevada now isn’t water, but also the deforestation of our traditional harvesting areas,” he says.

Using 360-degree drone technology, Dewey also hopes to give Paiute elders a virtual tour of the places that mean so much to them and their people.

But the use of drone technology by indigenous people is not just about the past, or even the present. Much of it is also looking toward the future. Drones have the ability to carry traditional ways of life into the future, possibly bringing technology-based jobs to reservations and helping spark preservation-interest in tribal youth.