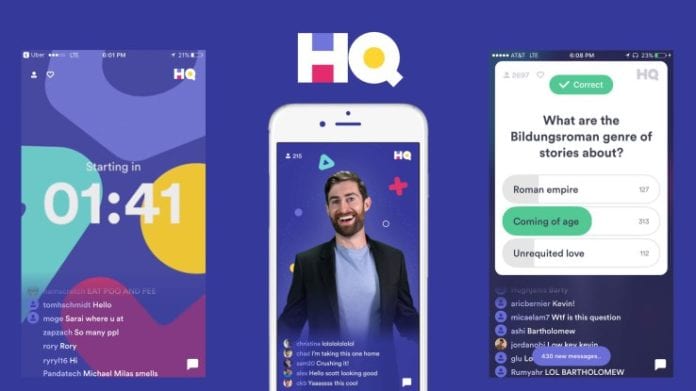 HQ Trivia is letting Android users pre-register for the live-streamed trivia game built by the makers of Vine, Rus Yusupov and Colin Kroll. Pre-registering means you’ll get notified the moment HQ Trivia is available for download.

HQ, which opened up pre-registration on December 24, had previously marketed its Android app as being available “this Christmas.” To me, that means it was supposed to be available by Christmas. But apparently that’s not what HQ Trivia meant. Earlier this month, the startup tweeted it’ll have “a nice little stocking stuffer coming your way” for those on Android phones. I’ve reached out to HQ and will update this story if I hear back.

HQ hosts live games every day at 6pm PT as well as every weekday at 12pm PT. The game is pretty simple. It asks you 12 multiple-choice questions and if you get all of them right, you win or split a predetermined amount of money. Just yesterday, HQ increased the minimum prize from $1,000 to $2,000.

Intermedia Labs, the company behind HQ, is reportedly looking to raise between $15 million and $20 million at a post-money valuation up to $100 million. However, there is also some reported hesitation from potential investors due to reports of Kroll’s behavior toward women.

Lightspeed Ventures Partner Jeremy Liew, who sits on the board of Intermedia Labs, acknowledged hearing some concern from investors regarding Kroll’s behavior. In a statement to Recode, Liew said some firms were not going to invest because of rumors of potential sexual harassment.

“So in my capacity as a board member, I conducted an investigation to find out what actually happened. I spoke to about a dozen current and former Twitter execs,” he wrote. “The investigation was exhaustive and included the most knowledgeable primary sources. I found a good deal of negative sentiment about Colin and the Vine team and some discomfort with his behavior, but I did not find evidence that warrants his removal from the company.”

GizmoCrazed - December 23, 2018 0
Gamelearn, which develops video games to deliver corporate training, has scored $5 million in Series A funding. Participating in the new financing round is...

The Best Places to Donate for Last-Minute Science Gifts