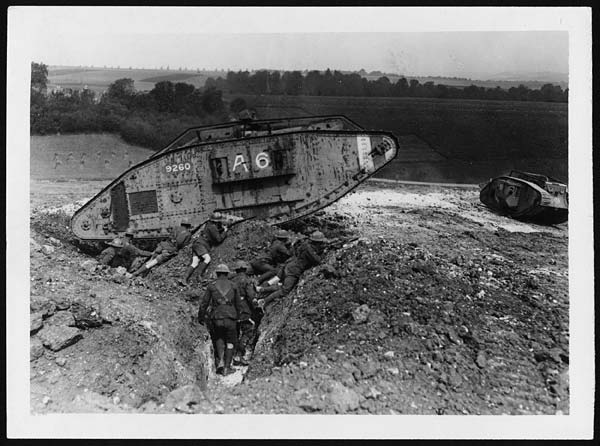 British tanks on training manoeuvres, in France, during World War I. This photograph of an advancing tank dwarfing British troops, gives an idea of the scale of tanks, and the power they brought to the front line in the last years of the war. The earliest models of tank were slow and excessively heavy, and struggled on wet ground, but later models were much more effective. Credit: National Library of Scotland | Tom Aitken

When the first tanks appeared on the battlefields of World War I, journalists described them as “grotesque creatures” and made comparisons to prehistoric animals such as dinosaurs. Even German prisoners of war supposedly laughed when recalling their first glimpse of the mechanical beasts. Later versions of British heavy tanks received an unflattering paint color known as “dog turd brown.” But 100 years ago, the first mass attack by hundreds of British tanks at the Battle of Cambrai signaled a huge change in modern warfare and even helped win civilian hearts and minds back home.

Tanks represented a military technology developed out of frustration with the grinding trench warfare that dominated much of the Western Front during World War I. For the British and Allied forces, armored tanks with their sloped treads seemed to offer the possibility of an offensive weapon that could shrug off machine gun bullets, tear pathways through barbed wire and roll directly over trenches. After trying out small groups of tanks in various battles, the British Army gathered almost 500 tanks for a huge armored assault on the German lines near Cambrai, France starting on November 20, 1917. The initial attack led by 324 tanks seemed like a huge success.

“I saw them on the first morning of the British breakthrough up by Villerspluich and Flesquieres, queer low-squatting things, moving slowly in the creeping mists, no more visible than shadows in that twilight of the early day,” said Philip Gibbs, a war correspondent writing for the New York Times. “Afterward I saw them below Havrincourt on the way to Graincourt and the Bourlon Wood on the day of battle, many of them crawling about the battlefield or resting under cover like herds of prehistoric animals.”

The first day of the battle saw the British forces punching through the main German Hindenburg defensive line and penetrating more than six miles in some places. But the tanks suffered heavy casualties, with 180 being out of action by the end of the first day, according to Indiana Neidell, host of the YouTube channel The Great War. That’s in part because World War I tanks such as the British Mark IV had relatively thin armor that artillery cannon shells could penetrate with either direct hits or even fragments from near misses. German soldiers could also sometimes simply climb on top of the tanks and toss grenades down inside any openings.

Still, less than half the tanks knocked out of action on the first day were destroyed by German forces. More tanks either broke down due to their finicky engines or had to be abandoned after getting stuck in trenches or craters.

Despite the early breakthrough, the Battle of Cambrai soon bogged down into a stalemate as German reinforcements counterattacked during late November and early December. Unlike their later cousins, the slow World War I tanks could not rush through gaps in enemy lines to exploit breakthroughs. The British Mark IV tanks used at Cambrai had a top speed of just 4 miles per hour, or barely as fast as a walking soldier. The tanks also had limited range due to their frequent refueling needs and the fact that many usually broke down after just a few days of action.

Nonetheless, British newspapers hailed the early breakthrough as “The Greatest British Victory of the War!” and church bells rang out across the homefront, Neidell explained. The British public also seemed to fall in love with the ungainly mechanical tanks when some veterans of the Battle of Cambrai were later paraded through London and other cities.

One tank was used in a fundraising campaign in London’s Trafalgar Square as a sort of giant piggy bank that encouraged crowds to buy war bonds, according to the Mary Evans Picture Library. Shops made metal or ceramic piggy banks in the shape of the British heavy tanks to encourage saving during the war. A London retailer even sold a tank-shaped handbag to women. Even before the Battle of Cambrai, one newborn daughter of a soldier serving in a tank crew supposedly received the name of “Tankie.”

Back on the front lines, life for the tank crews was fairly hellish even without the dangers of combat, said David Willey, curator for The Tank Museum in Bovington, England, during a video interview. The cramped conditions inside the tanks included an unpleasant combination of extreme heat from exposed red-hot pipes, constant loud noise from the engine, the possibility of accidentally bashing one’s head against various mechanical parts, and the threat of carbon monoxide poisoning from the engine fumes. Some tank crews simply stripped down to their underwear during summer operations.

But tank crews still seemed to take a certain pride in their specialized roles. During the Battle of Cambrai, one tank officer seemed to admonish the New York Times journalist Philip Gibbs for describing the tanks as prehistoric monsters. “Look here, don’t go calling the tanks ‘obscene monsters’ or ‘ichthyosauri’ or ‘prehistoric toads,’” he said. “It seems to make a joke of what after all is no joke.”

Tank crews also displayed great courage under fire, especially when they had to climb out to guide their vehicles. Some even abandoned their ditched vehicles and continued fighting on foot. One of just four Victoria Crosses won by tank crews in World War I went to Captain Richard William Leslie Wain on the first day during the Battle of Cambrai. He abandoned his damaged tank and continued fighting with a Lewis machine gun despite already being seriously injured, taking a German strongpoint and capturing several prisoners before being killed.

The tanks did not win the war alone. Many military historians point to the Battle of Cambrai as perhaps the first impressive example of modern military forces demonstrating a combined arms assault that included infantry soldiers, artillery, tanks and aircraft all working together.

Still, the Battle of Cambrai in late 1917 impressed commanders on both sides with the idea that massed tanks could do better than just small groups of tanks. To complement the heavy tanks, the British and French both built more smaller, faster “whippet” tanks capable of moving a jogging speed to better exploit future breakthroughs. The following year in 1918, Allied forces used tanks and combined arms to achieve a true breakthrough starting at the Battle of Amiens that helped lead to the end of the war.

The Tank of England: Raising Funds With Britain’s New Weapon

Andreessen Horowitz isn’t alone in leaving behind VC as we know...

GizmoCrazed - April 3, 2019 0
This morning, Forbes wrote a lengthy profile of Andreessen Horowitz, the now 10-year-old venture firm that its rivals love to hate but nevertheless tend...

Inside the Arena Where Drones Battle a Wall of 1,300 Computer...

Snakelike Skin Gives a Robot the Power to Crawl