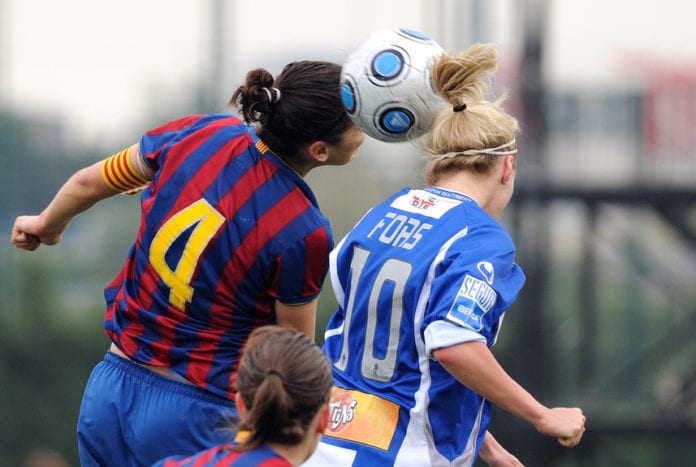 Ladies, looks like we might have another thing to worry about — well, at least for those of us who play soccer.

New, unpublished research, presented in November at the annual Society for Neuroscience conference in Washington, D.C., suggests female soccer players experience greater brain damage from heading the ball than men do. The injury occurs in white matter tracts — the long, branch-like nerve fibers, or axons, that extend from neurons, crisscross the brain and connect different regions.

The research team scanned the brains of nearly 100 men and women, all amateur soccer players in their 20s and 30s. The male and female participants were matched for age and how often they’d headed a ball in the last year. So for example, if the researchers used the brain scan of a 25-year-old female player who’d headed maybe 500 times over the last year, they also included one from a 25-year-old male player who’d completed the same number of passes with his cranium.

The difference in how each gender responded to the same number of impacts was noticeable: Across all the women, eight different brain regions had injured white matter, while in the men, just three did. And overall, the women saw a five-fold increase in affected tissue compared to men.

So, what could explain the discrepancy?

“Women generally have been known to have more symptoms that last longer, with worse outcomes, following mild head injuries than men,” says Michael Lipton, a professor of radiology and of psychiatry and behavioral sciences at Albert Einstein College of Medicine in New York, and one of the study’s authors.

In the past, experts thought these sex differences were simply due to more women reporting symptoms compared to men. However, Lipton says his research supports the idea that the difference is physiological.

There are two theories as to why women experience greater brain damage: biomechanics and sex hormones. Women typically have weaker neck muscles and lower body mass than men, so it’s possible that a woman’s head (and brain) absorbs more of the ball’s force than a man’s does.

Alternatively, it has been proposed that the sex hormone progesterone can protect against traumatic brain injury. The ebb and flow of progesterone during a woman’s monthly hormonal cycle — specifically when progesterone levels decline — may leave her brain temporarily more vulnerable to a ball hitting it at high speeds.

How Much Is Too Much?

Regardless of gender, for soccer players, the damage isn’t caused by a single traumatic incident, like a concussion, but by repeated minor hits. As headers accumulate, the frequent impacts can trigger inflammation in the brain, eventually leading to neurodegeneration.

Lipton says there appears to be a threshold effect, since it seems these changes only start to crop up in people who head the ball more than 1,000 times a year. “There’s likely to be some degree of heading which may not be bad for most people… There’s also likely to be an amount of heading that’s not good for anybody.”

However, he cautions that some people may be more vulnerable than others. “This threshold is almost certainly not the same for everybody. It may be different for men and women, it may be different depending on your age, it may vary depending on your genetic susceptibility, your IQ, your neck strength,” he says. “We really don’t know. The only way to really understand this is to do the hard work to collect data and figure it out.”

GizmoCrazed - April 6, 2018 0
The shape on the screen appears only briefly—just long enough for the test subject to commit it to memory. At the same time, an...

5 Industries That Will Benefit from 5G