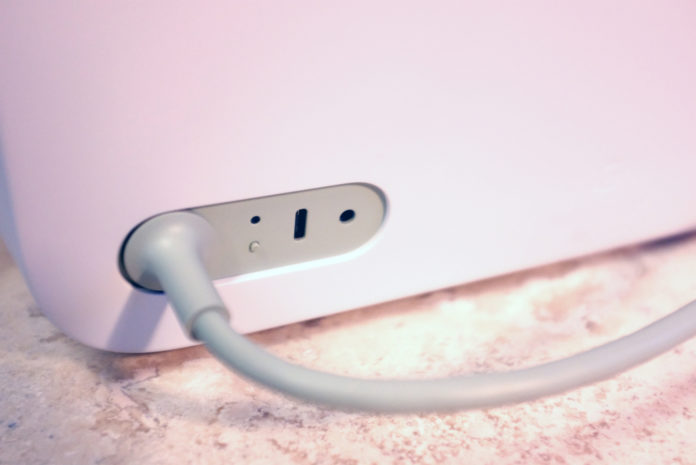 The days of buying devices or smart assistants will be over soon enough. Amazon and Google have both made clear their intention to make their respective AI device agnostic, so the days of the standalone Google Home or Amazon Echo might well be numbered.

Assistant and Alexa are already being built into everything from thermostats to lamps. In order for smart speakers to continue to have a spot in the home, they’re going to have to be speakers first, smart second. Proprietary products are already competing with offerings from big-name audio brands like Sonos, Sony and JBL. It’s no surprise, then, that we’ve seen Amazon, Apple and Google all head in that direction in recent months.

The new Echo kind of, sort of, edges in that direction with improved audio, but the Google Home Max and Apple HomePod offer up similar visions for a future in which smart assistants are a nice bonus on a device focused on delivering high-quality, floor-rumbling, room-filling audio. And with prices approaching $400 a piece, it had better be.

The Google Home Max isn’t effing around here. It’s big and it’s heavy. The thing weighs 12 pounds. I am painfully aware of this fact because I stupidly had Google deliver it to our office, and I then threw it in a backpack to take home to test. I am currently investigating our company’s worker’s comp policies for the strained muscle in my back.

I’m a weird outlier, of course (in many ways, but let’s focus on this one for now). The Home Max is very much not a portable speaker. In fact, if aesthetics dictate purpose in this case, it’s practically a piece of furniture, with a fabric-covered front inline with the rest of the Google Home offerings.

The Home Max isn’t a flashy speaker from a design perspective. Like the rest of the Home line, the Max is designed to blend in with its surroundings. It’s a boxy design that comes in black or white (charcoal or chalk, if you will). The Max is a minimalist, exchanging buttons for a simple touch panel on top, and interacting with a quartet of LED dots that shine beneath the fabric front. It’s a nice-looking device; understated, really.

The touch panel on top controls volume and turns the system on an off — though on occasion I had trouble getting it to work just right. Also of note is a switch on the back of the device that disables the microphone — a key privacy feature, though it would have been nice if the company had made it a bit more prominent the way Amazon does with the Echo line.

Back to the wall

What’s perhaps most interesting from the design perspective is that Google shied away from 360-degree audio here. Pretty much every standalone smart home speaker is built that way, ditto for the HomePod. The idea here, however, is that most people don’t actually plop their speakers in the middle of the room. That’s certainly the case with me. I brought the Max home and found a wall to place it up against.

Like the HomePod, the Max promises a customized audio footprint based on its surroundings. But instead of attempting to create some full audio picture of its surroundings, the system bases its audio fingerprint on the back wall, because much of what you’re hearing is that sound reflected back at you.

Google has deemed the feature “Smart Sound,” adjusting audio equalization based on the wall. The system utilizes on-board microphones to listen to the bass as it bounces against the wall, adjusting the sound settings accordingly. According to Google, the whole process only takes a few seconds, but the system draws this out to 30 seconds in order to gradually ease into a new sound.

The adjustment is subtle and fairly hard to detect. And, honestly, you probably won’t be running up against this too often, given what a pain in the ass (and lower back) the system is to move.

The Max sounds good. But is it $399 good? In a word, no. Given the way the smart speaker market has been playing out, I wouldn’t be too surprised to see a price drop soon after the holidays — but as it stands, the Max doesn’t really live up to the expectations of such a pricey system.

But it does sound good enough that many users will be perfectly happy. The audio is loud and clear, and the bass bumps like a mofo, courtesy of a pair of 4.5-inch woofers. The audio quality is solid enough the company doesn’t have to sweeten things up with added bass, but the lows are pretty intense. Thankfully, you can tweak those settings to your liking through the Google Home app.

The whole “room filling” experience isn’t a problem, either. Granted, I’ve got a New York City apartment, so my space isn’t the most… demanding, but the single Max more than did the trick and continued to sound great, even at high volumes, much to the chagrin of my poor neighbors (but those jerks knew what they were signing up for when they moved in next door to a tech writer).

For those who need more than Max firepower, buying two will turn them into stereo speakers, enhancing the experience — and driving the price up to around $800, of course. 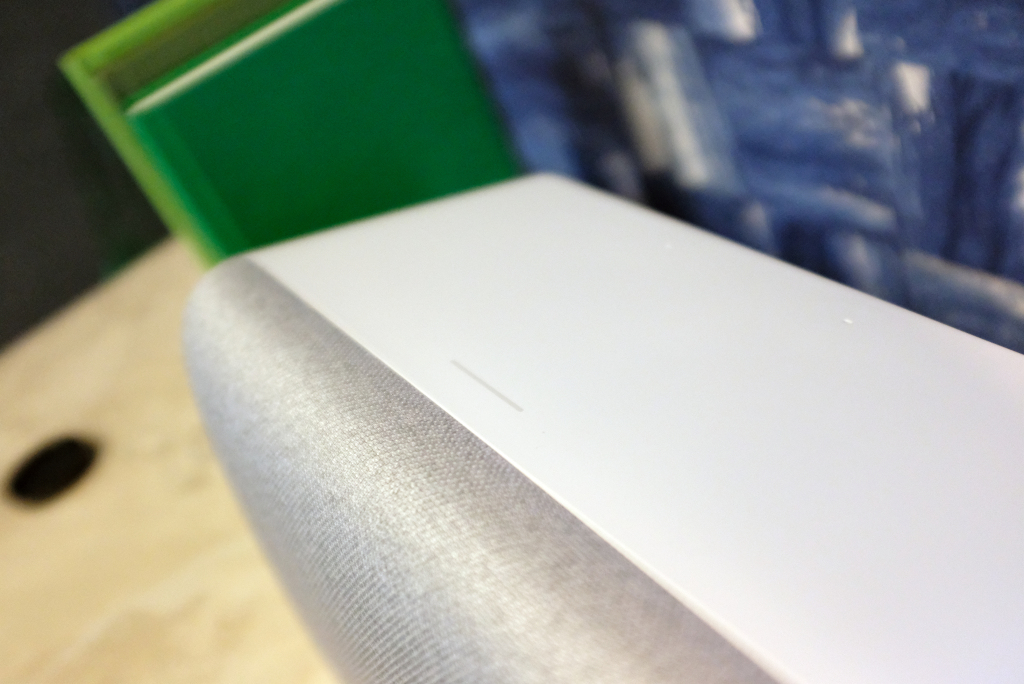 The Max is an audio-first device, but Assistant is where the system shines. In a way, it’s not surprising. Assistant isn’t just a platform for the company. It’s the culmination of much of what the company has been working on over the past decade and a half. It’s contextual search, AI and machine learning all rolled up into one. All of that helps Assistant with contextual search — using other information to grab the right results, rather than taking a shot in the dark.

It’s got that leg up on Alexa, though it’s still not perfect. My biggest annoyance with the system came when I was attempting to test its lyric feature. It’s a cool addition to Assistant’s music functionality, where you can say “play me the song that goes ‘I never thought it would happen with me and the girl from Clapham’ ” and it will play Up the Junction by Squeeze.

Or, as happened to me multiple times, it will play “Play that Song” by Train and you’ll want to toss the Max out a window, because Train is a terrible band that no one should listen to. Thankfully, it costs $399 and weights 12 pounds, so you leave it be and move on.

That said, the system’s voice recognition is solid, and I was impressed by its ability to recognize the “OK Google” and “Hey Google” commands, even when it was playing music at loud volumes. Also, kudos to Google for letting you set up a third-party music service as a default. Too often these devices are about locking users into a particular ecosystem. Here, I was able to set up Spotify out of the box (you also can use YouTube music and Pandora). So you don’t have to specify that you want to play a song on a given service.

If you want to play back audio from YouTube, on the other hand, you’ll need a YouTube Red account. Thankfully, the speaker ships with a free 12-month plan. The least Google could do with a $399 speaker. 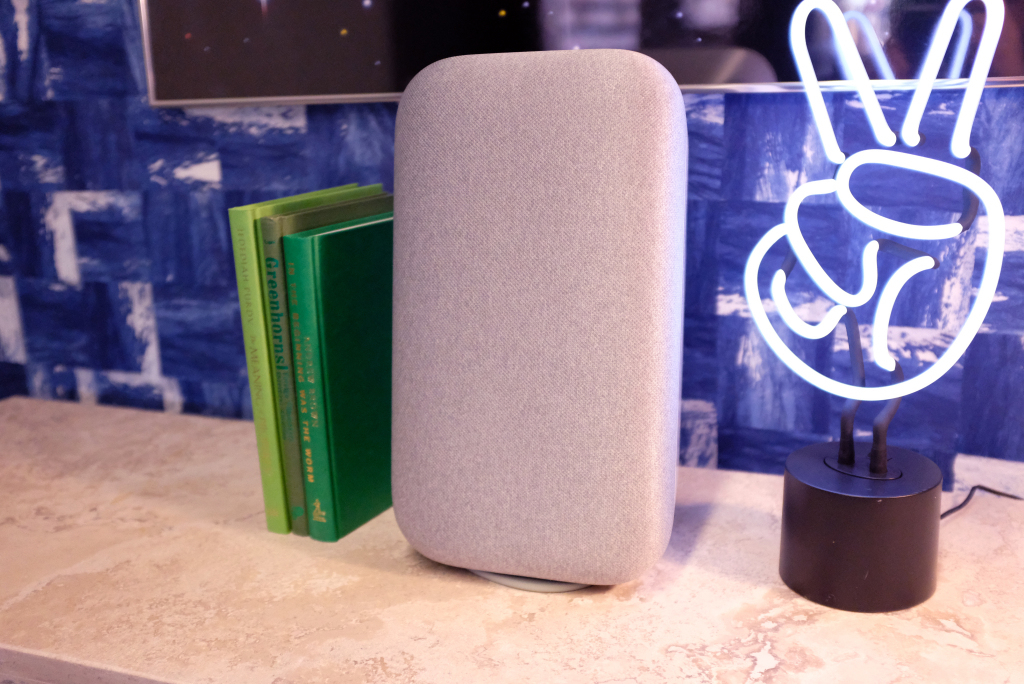 That $399 price tag will be pretty hard for many to stomach, especially as more and more third parties come out with their own smart Assistant speakers. It says a lot that it’s $50 more than Apple’s premium speaker. Though the Home Max has some decided advantages over the HomePod, not the least of which is that it’s actually on the market right now. Apple’s offering, meanwhile, is slated for some time early next year.

On the whole, it’s a solid offering. Google Assistant is tough to beat and the hardware mostly stands on its own. It’s not the most stellar piece of audio equipment at its price point, but Google’s engineered something that works right out of the box, while Smart Sound means you won’t have to do any EQ fiddling in the off-chance that you end up moving it from its current position.

If you want to further customize it, that’s possible, too. The Google Assistant app is much more robust than Alexa. But plug-and-play capabilities will likely appeal to many users simply looking for a nice-sounding system that also can help get them ready for work in the morning.

GizmoCrazed - November 20, 2017 0
Tesla’s truck is a departure from more traditional diesel-powered equivalents in a number of ways, but it might be most starkly different when it...

DroneGun Tactical is a portable (but still illegal) drone scrambler