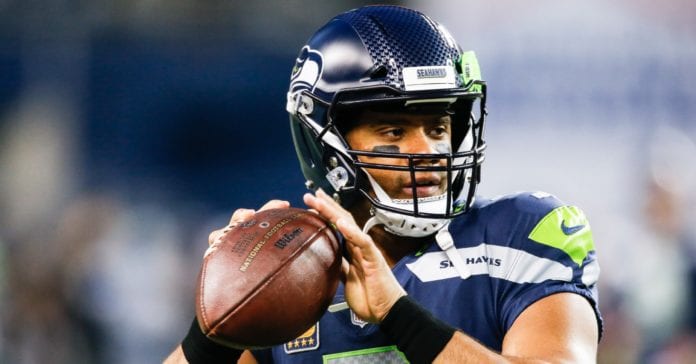 During Sunday’s NFL game between the Seattle Seahawks and the Philadelphia Eagles, Seahawks quarterback Russell Wilson makes a pretty nice move. After taking the ball and running with it, he makes a quick pitch off to the side while faking out the defender. Looks pretty cool, but it probably wasn’t legal. In the NFL, once you cross the line of scrimmage you can only toss the ball backward. This should have been a penalty for an illegal forward pass, but it looks like he got away with it.

But was it really a forward pass? Yes. It’s not so easy to tell if you watch this in real time, but going frame by frame it’s much clearer. Wilson tosses the ball when he is at the 46 and a half yard line. The running back (Mike Davis) catches it at 47.5 yard line. That’s a pass that goes 1 yard forward—so a forward pass.

Just to further drive home the point, I can use my favorite video analysis techniques (using Tracker Video Analysis) to get the position of both Wilson and the ball as he runs down the field. Check this out.

In this plot, the red data shows the position of Russell Wilson in the direction of the field (x-direction) and the blue data is the position of the ball. Just for fun, I can also fit a linear function to the data (for straight parts) to get the velocity in that direction. During the toss, Wilson is running at 4.55 m/s (10.2 mph) while the ball has an x-velocity of 1.27 m/s. But since both the ball has a positive x-velocity, it is indeed a forward pass. Illegal.

Suppose you are in a car driving 30 mph along a road. While it’s driving, you take a football and throw it backward from car with a speed of 10 mph. From your viewpoint (in the car moving 30 mph), it looks like the ball is traveling in the backward direction at 10 mph. However, if you were on the ground (and stationary) looking at the car, the ball would still be moving forward with a speed of 20 mph (30 mph – 10 mph = 20 mph).

This is exactly what’s going on here. We (as humans) tend to view the ball with respect to the moving thrower. On top of this, the camera pans with the motion of the runner. This also encourages us to view from the reference frame of the runner. So, in a sense we are tricked into thinking it’s a backward pass.

Maybe this will help. Here is an animation with a stationary world view such is how it would appear if the camera didn’t move.

From this view, it’s much clearer that the ball moves forward. Velocity is always relative to your frame of reference. But of course, it’s only a penalty if the referees decide to flag it.