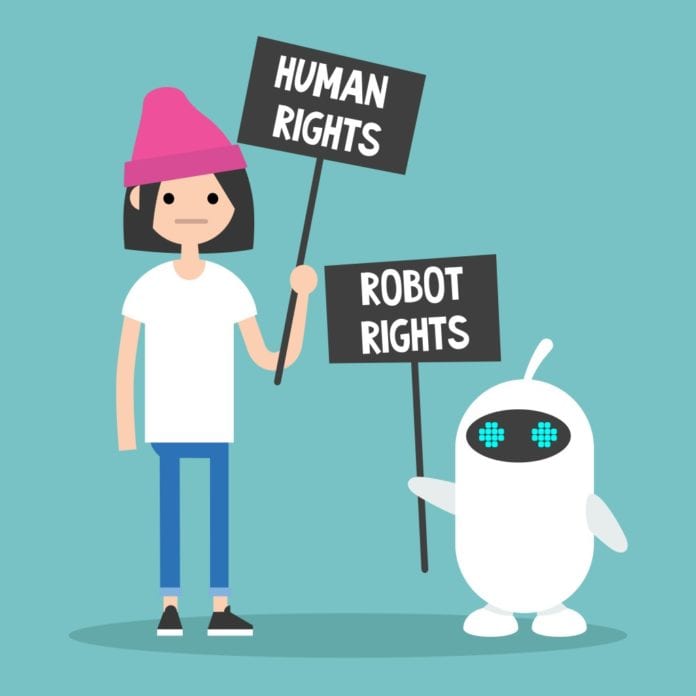 When the humanoid robot Sophia was granted citizenship in Saudi Arabia—the first robot to receive citizenship anywhere in the world—many people were outraged. Some were upset because she now had more rights than human women living in the same country. Others just thought it was a ridiculous PR stunt.

Sophia’s big news brought forth a lingering question, especially as scientists continue to develop advanced and human-like AI machines: Should robots be given human rights?

Discover reached out to experts in artificial intelligence, computer science and human rights to shed light on this question, which may grow more pressing as these technologies mature. Please note, some of these emailed responses have been edited for brevity.

Robots are machines, more similar to a car or toaster than to a human (or to any other biological beings). Humans and other living, sentient beings deserve rights, robots don’t, unless we can make them truly indistinguishable from us. Not only how they look, but also how they grow up in the world as social beings immersed in culture, perceive the world, feel, react, remember, learn and think. There is no indication in science that we will achieve such a state anytime soon—it may never happen due to the inherently different nature of what robots are (machines) and what we are (sentient, living, biological creatures).

We might give robots “rights” in the same sense as constructs such as companies have legal “rights”, but robots should not have the same rights as humans. They are machines, we program them.

Watch her TedXEastEnd talk on why robots are not human:

Are robots equivalent to humans? No. Robots are not humans. Even as robots get smarter, and even if their smartness exceeds humans’ smartness, it does not change the fact that robots are of a different form from humans. I am not downgrading what robots are or will be, I am a realist about what they are: technologies to support humanities.

Should robots be given rights? Yes. Humanity has obligations toward our ecosystem and social system. Robots will be part of both systems. We are morally obliged to protect them, design them to protect themselves against misuse, and to be morally harmonized with humanity. There is a whole stack of rights they should be given, here are two: The right to be protected by our legal and ethical system, and the right to be designed to be trustworthy; that is, technologically fit-for-purpose and cognitively and socially compatible (safe, ethically and legally aware, etc.).

Founder and Principal Researcher of ATONATON

Your question is complicated because it’s asking for speculative insights into the future of human robot relations. However, it can’t be separated from the realities of today. A conversation about robot rights in Saudi Arabia is only a distraction from a more uncomfortable conversation about human rights. This is very much a human problem and contemporary problem. It’s not a robot problem.

Sophia, the eerily human-like (in both appearance and intelligence) machine, was granted Saudi citizenship in October. Here’s her speaking about it:

Professor of computer science and engineering at the University of Michigan

I don’t believe that there is any plausible case for the “yes” answer, certainly not at the current time in history. The Saudi Arabian grant of citizenship to a robot is simply a joke, and not a good one.

Even with the impressive achievements of deep learning systems such as AlphaGo, the current capabilities of robots and AI systems fall so far below the capabilities of humans that it is much more appropriate to treat them as manufactured tools.

There is an important difference between humans and robots (and other AIs). A human being is a unique and irreplaceable individual with a finite lifespan. Robots (and other AIs) are computational systems, and can be backed up, stored, retrieved, or duplicated, even into new hardware. A robot is neither unique nor irreplaceable. Even if robots reach a level of cognitive capability (including self-awareness and consciousness) equal to humans, or even if technology advances to the point that humans can be backed up, restored, or duplicated (as in certain Star Trek transporter plots), it is not at all clear what this means for the “rights” of such “persons”.

We already face, but mostly avoid, questions like these about the rights and responsibilities of corporations (which are a form of AI). A well-known problem with corporate “personhood” is that it is used to deflect responsibility for misdeeds from individual humans to the corporation.

At present, I don’t think that robots should be given the same rights as humans. Despite their ability to emulate, even exceed, many human capacities, robots do not, at least for now, appear to have the qualities we associate with sentient life.

Of course, rights are not the exclusive preserve of humans; we already grant rights to corporations and to some nonhuman animals. Given the accelerating deployment of robots in almost all areas of human life, we urgently need to develop a rights framework that considers the legal and ethical ramifications of integrating robots into our workplaces, into the military, police forces, judiciaries, hospitals, care homes, schools and into our domestic settings. It means that we need to address issues such as accountability, liability and agency, but that we also pay renewed attention to the meaning of human rights in the age of intelligent machines.

My gut answer is that the Universal Declaration says that all human beings are born free and equal…a robot may be a citizen, but certainly not a human being?

The consensus from these experts is no. Still, they say robots should still receive some rights. But what, exactly, should those rights look like?

One day, Schippers says, we may implement a robotic Bill of Rights that protects robots against cruelty from humans. That’s something the American Society for the Prevention and Cruelty for Robots already has conceived.

In time, we could also see that robots are given a sort of “personhood” similar to that of corporations. In the United States, corporations are given some of the same rights and obligations as its citizens—religious freedom, free speech rights. If a corporation is given rights similar to humans it could make sense to do the same for smart machines. Though, people are behind corporations…if AI advances to the point where robots think independently and for themselves that throws us into a whole new territory.

GizmoCrazed - October 14, 2014 0
Who likes waiting? None, I’d presume. When it is about waiting for your smartphone to recharge, the wait is even more annoying. However, this...