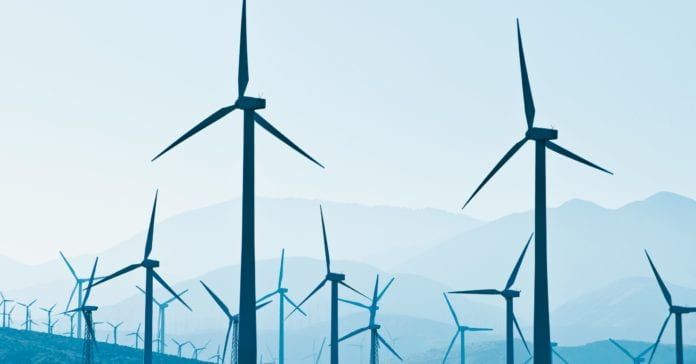 Big offshore wind farms power Europe’s drive for a carbon-free society, while rows of spinning turbines across America’s heartland churn enough energy to power 25 million US homes. But a new study predicts that a changing climate will weaken winds that blow across much of the Northern hemisphere, possibly leading to big drops in clean wind energy.

That’s because the temperature difference between the North Pole and the equator, which drives atmospheric energy in the form of winds and storm systems, is shrinking as the Arctic warms. A warmer Arctic means less of a temperature difference and therefore weaker winds across the central United States, the United Kingdom, the northern Middle East, and parts of Asia. It’s just one of many weather-related effects that scientists forecast are likely to occur as concentrations of heat-trapping carbon dioxide continue to rise in the Earth’s atmosphere—from stronger hurricanes to weaker polar vortexes.

“Our results don’t show the wind power goes to zero, it’s a reduction of 10 percent over broad regions,” says Kristopher Karnauskas, a climate scientist at Colorado University Boulder and lead author of the new study published Monday in the journal Nature Geoscience. “But it’s not trivial.”

Wind derives its energy from instability between regions of the globe—in the Northern hemisphere, from instability between the equator and North Pole. “That’s why we have a constant parade of weather systems,” says Karnauskas. “They are there because of this contrast in energy between the equator and the pole. Because the Arctic is warming so much faster than the rest of the world, you can imagine how it changes the gradient.”

Down under, things are likely to be different. Under some climate change prediction models, the Southern Hemisphere will see stronger winds because the difference in southern land and sea temperatures will increase. Changing wind patterns in the Southern hemisphere might have other effects as well, including pushing masses of warm water off the Antarctica coastline and melting glaciers from below at a faster rate.

Karnauskas and colleagues used several climate scenarios from the latest IPCC report and combined them with a formula that the wind industry uses to derive how much electricity a turbine can produce. The study used 10 climate models, each one using a different level of atmospheric carbon dioxide concentrations by 2050 and 2100. Together, those data indicate changing weather patterns will cause an 8 to 10 percent drop in wind across much of the Northern hemisphere by 2050, with a 14 to 18 percent drop by the end of the century. “Most of the human population and wind farms are in the Northern hemisphere,” says Karnauskas.

And a small drop in available wind can translate into a bigger drop in the amount of wind energy produced by turbines. “The total energy from wind farms would drop significantly,” says Geoff Spedding, professor of aerospace and mechanical engineering at the University of Southern California who was not involved in the study. That’s because power output is windspeed to the third power—so Spedding calculates that a 10 percent drop in wind power would result in a nearly 30 percent drop in wind-derived energy.

That doesn’t mean the potential for wind power will disappear. Karnauskas says that a changing climate would merely “shift the potential for wind power from the north to the south.” The study calculates potential wind power hotspots in places like East Australia, West Africa, and the Brazilian coast, for example. The big losers will likely be the Central US and Scandinavia, places where wind power has surged in recent years. That kind of shift may mean new players in the global wind game, especially if there’s an economical and efficient way to store this energy.

Spedding notes that the operators of wind farms are used to dealing with variability in wind speed and direction—they will likely find ways to compensate for a future with less available wind. That idea is shared by a co-author on the paper who studies the turbulent airborne “wake” produced behind the spinning blades of 300-foot tall wind turbines, which reduces the energy available for turbines downwind. Julie Lundquist, atmospheric scientist at CU, says that researchers are considering ways to get the next generation of turbines higher off the ground where winds travel faster. They could put turbines on kites for example, or change the position of individual turbines in order to reduce the wake that flows behind.

“Existing wind farms won’t stop working,” Lundquist says. “But we should be on the alert to look for indications of change.” The US currently gets about 5 percent of its power from wind turbines, although five states in the Midwest generate more than 20 percent of their electricity from this renewable source of energy. Hopes for East Coast offshore wind farm were dashed recently when Cape Wind pulled the plug on an operation between Long Island and Martha’s Vineyard after strong local opposition. But developers and state officials in Maryland, Virginia, and North Carolina are hoping that projects in those waters will soon be replacing coal-fired energy with wind power. Of course, if those winds peter out, future wind farms could be left stranded—or at least in search of new technologies to keep green power flowing.

Shadow launches its cloud computer for gamers in the UK

GizmoCrazed - January 26, 2018 0
French startup Blade, the company behind Shadow, is launching its cloud gaming service in the U.K. Just like in the U.S., the company is starting with...