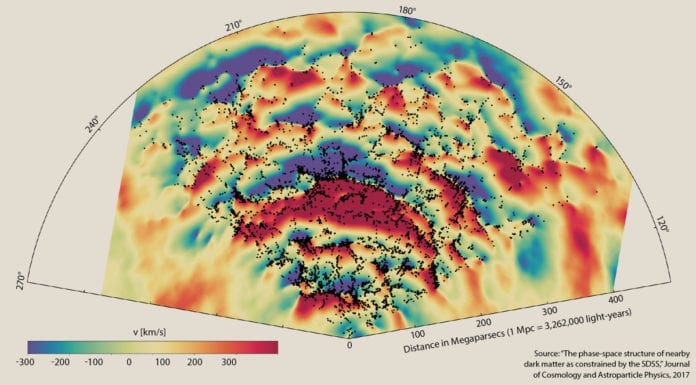 Cosmologists from the U.K., France and Germany have come up with new maps of how dark matter moves throughout the universe. Scientists can’t actually observe dark matter, which makes up about 27 percent of our universe’s total mass, since it doesn’t react to light. So these researchers had to infer its movement by using data from the Sloan Digital Sky Survey (SDSS), an ongoing project to create a 3-D map of the universe. Here, researchers have layered the location of galaxies (marked with black dots) pulled from the SDSS on top of their dark matter data. Warmer colors represent matter that’s headed our way, while cooler colors indicate matter that’s flying away from us. (Source: “The phase-space structure of nearby dark matter as constrained by the SDSS,” Journal of Cosmology and Astroparticle Physics, 2017)

GizmoCrazed - September 15, 2010 1
Robotics has made tremendous strides in replicating the senses of sight and sound, but smell and taste are still lagging behind, and touch was...