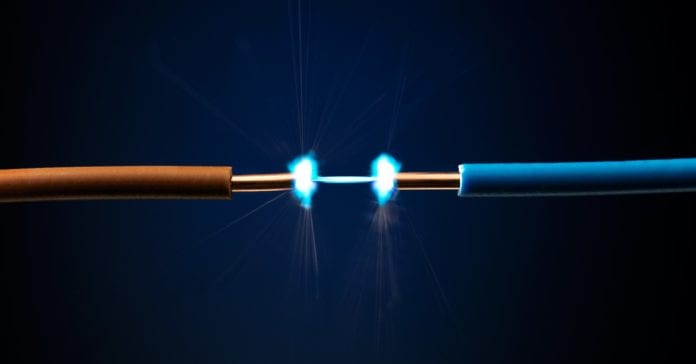 The phrase “heat engine” might trigger some bad memories from your introductory thermodynamics course. But don’t worry, I am going to show you the coolest heat engine you could possibly image—the thermoelectric generator (TEG).

The basic idea behind a heat engine is to draw some useful energy out of a temperature difference. This output energy could be mechanical or electrical—and other weird stuff. But there’s a very basic example that you’ve probably seen: the steam engine. You heat up some water to make steam, which can expand and push something. Then it condenses to let something shrink.

For this steam engine to work at all, you need the outside temperature lower than the temperature of steam—or the steam would never condense. And in fact, all heat engines depend on a difference in temperature. If you want a more in-depth explanation of the mechanics of a steam engine, try this video.

Now for the simplest heat engine you will ever see—you can even make this yourself. You just need a paperclip and bare copper wire (or any two different metal wires). I’m assuming this is a steel paperclip. Cut the paperclip into two parts and then connect each part to one end of the copper wire. It should look something like this.

Seriously, this setup alone is going to be a thermoelectric generator. How cool is that?! In order to get this to work, just put one end of the copper-steel junction into something hot and the other copper-steel junction into something cold The two free ends of the paperclip will be the output of this generator. Since this isn’t a very efficient thermoelectric device, I am just going to connect the output to a voltmeter. For my hot end, I am going to use a hot plate and the cold end is going to be salt and ice (which is colder than just plain ice). Here’s what it looks like.

As you can see from the voltmeter, I am getting 1.2 milliVolts. That’s not much, but it is something. (The mass on the hot plate is just there to push the copper-steel junction down for good contact, if you were wondering.)

What you are seeing here is the Seebeck Effect (named after Thomas Seebeck). Two different metals together at two different temperatures can create an electric current. The effect is more pronounced with a larger temperature difference and some metal combinations work better than others—but there it is, your thermoelectric generator.

Actually, you can make a better generator by using a semiconductor instead of two different metals—but the two metal version is way easier to build. Here is a demo with a semiconductor. The device is sandwiched between two aluminum legs, with one leg in hot water and the other in cold water. The output from the device is going into a small electric motor on top.

So, how does this work? Why does a difference in temperature (for different metals) produce an electric current? I’m not going into the full story, since that would take way too long. But here is my super short answer: An electric conductor has free charges that can move about (somewhat). When you apply an electric field, these charges move and create an electric current. Normally, we think of these charges as electrons—but it could be something else. If you take a metal and make one end hot and the other end cold, the electrons on the hot side will have more energy and move about more. These hotter electrons spread out and on the cold end the electrons have less energy. The amount of charge separation depends on the particular metal.

Now take another metal with two ends at different temperatures. But since this metal is different than the first one, it will have a different charge separation on the hot and cold ends. When these different metals are put together, they will form a type of battery—not a very good battery, but still it’s like a battery. And boom—there’s your thermoelectric generator.

If you are thinking about building a thermoelectric generator to power your house, I have some bad news. These things are very inefficient. You need pretty big temperature differences to get something useful out of them. However, there is also some good news. These thermoelectric generators have no moving parts. No moving parts means they are small and quite reliable. And this is why they are used in some spacecraft (like Voyager, Cassini, and others). In order to make a temperature difference, the spacecraft will use a radioactive source that stays very hot—and really that’s it. That’s how your radioisotope thermoelectric generator (RTG) works. It’s just like the paperclip and copper wire generator—except that it’s way better.

But wait! There’s more. You can do something else with two different metals. What if I use the same two metals, but instead of putting the ends at different temperatures and getting a voltage, I connect them to a battery? Also, I will put the two ends in water just to make it a little bit easier to measure the temperature. In order to get a measurable effect, I made two changes: I’m using nichrome wire instead of steel and I made multiple junctions in series. Here’s what it looks like.

Both beakers of water start off at room temperature. There are some extra wires you see—these are to measure the temperatures of the two amounts of water same amount. Now when I hook up a D-cell battery, I can measure the temperature as a function of time. I should see one beaker of water increase in temperature and the other decrease, but it doesn’t quite work. I need to perhaps improve my setup, but something like this should work. This is called the Peltier effect (when it works). It’s the opposite of the Seebeck effect.

Here is a better demonstration. If I take the electric motor off the thermoelectric generator, I can apply a voltage. In this case, one side gets warm and the other side gets cold. You could feel it with your hands, but that doesn’t work over the internet. Instead, I can show you this infrared image.

Yes, this is basically a refrigerator. It’s not very efficient in cooling things, but you can make a super small device that can decrease the temperature of something without any moving parts. The Peltier coolers are very useful in cameras that are very sensitive to thermal noise. They are also useful for keeping your drink cold while you are driving in your car. They even make thermoelectric wine coolers (the other name for a Peltier cooler).

If you can do all of this with just two pieces of metal, just imagine what you could with three.