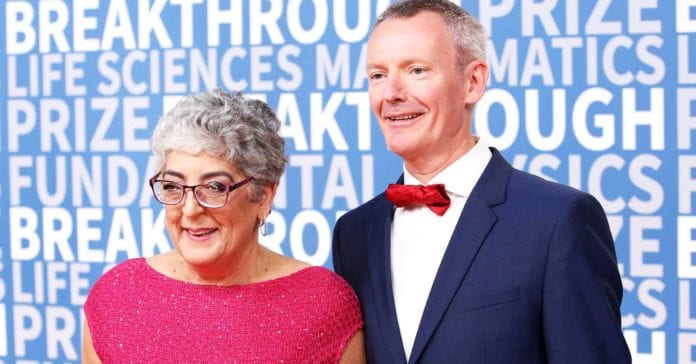 Every year in December, a makeshift hangar at the NASA Ames Research Center pops up for one night, transforming the austere airfield into a glitzy, paparazzi’d, black velvet-roped Nerd Prom. At the Breakthrough Prizes—where on December 3, a total of $22 million was handed out to pioneers in math, physics, and the life sciences—researchers traded lab coats and latex gloves for floor-length gowns and bow-tied tuxedos. Outside it was all barbed wire and cold steel, but on the red carpet, stars and scientists alike sweated under the bright white lights and flash of cameras.

“My lab is going to be totally shocked to see me like this,” said Joanne Chory, a plant geneticist at the Salk Institute in San Diego and the only female awardee at Sunday’s prize ceremony, as she sparkled in a pink sequined shift with matching metal glasses frames. The winners, all 12 of them, had been under strict instructions not to tell any of their colleagues before hopping on planes and flying in for the event. But as the clock struck 4:30pm Pacific Time, and news began to get out, the emails started flooding in. David Spergel, a theoretical physicist at Princeton, was one of five members of the universe-cataloguing WMAP team to win the prize in physics. “There are five of us here being recognized, but 20 more on our team who just found out, they’re absolutely thrilled.”

The Nobels may be more prestigious than the Breakthroughs, but they come with a lot less money (about $2 million less, per prize). Alfred Nobel, whose fortune in the dynamite industry financed the namesake prize, hoped it might atone for his explosive contributions to science. But that isn’t the only thing that has embroiled the award in controversy from the very start. His will instructed that each prize could be awarded to only one person, only for discoveries made the preceding year, and oh, yeah, no mathematicians. While the committee tasked with carrying out his dying wishes has relaxed some of the rules over the years, the underlying framework still upholds the absurd notion that scientific advancement arrives on the back of lone geniuses.

The Breakthrough Prize was supposed to fix all that—with a spirit of inclusivity, optimism, and shiny Silicon Valley cash. Much of that prize money comes from Yuri Milner, the Russian billionaire tech investor who set up and financed the first award before convincing execs at Facebook, Google, 23andMe, and Alibaba to chip in more. (Since 2012, they’ve together awarded more than 70 $3 million prizes to research standouts.) But when the Paradise Papers were made public in early November, they revealed that behind Milner’s investments in Facebook and Twitter were hundreds of millions of dollars traced back to the Kremlin.

The Valley’s other oligarchs—Mark Zuckerberg, Sergey Brin, Sundar Pichai, Jack Dorsey—have also come under fire for their platforms’ complicity in spreading Russian misinformation during the 2016 presidential campaign. In October, the tech titans took a bipartisan beating on Capitol Hill, where members of Congress excoriated Facebook, Twitter, and Google for enabling Russian attempts to divide the American electorate and sow doubt in the democratic process.

The ensuing tech backlash is hitting hardest in Washington, where talk of regulation and anti-trust lawsuits have ticked up in recent months. In the nation’s capital, the corporate leviathans once seen as beacons of new American enterprise are increasingly portrayed as sinister centers of power, too big to be accountable. These revelations and transformations can’t help but change the perception of the wealth backing the various Breakthroughs. Perhaps anticipating this line of questioning, the event’s tech royalty were noticeably silent this year. Only Dick Costolo, previously of Twitter, braved the media corral, saying only that he was happy to be at an event that “puts scientists front and center.” Brin declined questions, as did Milner, who barely cracked a close-mouthed smile for the cameras. Mark Zuckerberg and Priscilla Chan were no-shows, though Zuck did send in a grey-hoodied video greeting that played during the award ceremony. Cori Bargmann was present, the lone, in-person representative from the couple’s philanthropic organization, CZI. This marked a striking comparison to last year, said one of the male reporters in the pool, who had found Milner an entertaining interview in 2016. “If I had known it was going to be like this, I don’t think I would have come,” he said.

With Silicon Valley’s luminaries sticking to the sidelines, it was perhaps Gavin Newsom, California’s Lieutenant Governor, who captured the moment best: “We are celebrating tonight everything that Trump’s Washington is not: facts, science, innovation, entrepreneurialism,” he said “It’s important that we show here in California that we are committed to investing in that.”

And at least for the winning scientists, the award has not yet been tainted by the backlash or the current political climate. Chory says she didn’t think twice about accepting. She’s planning to give most of the money to her kids, so that they can pay back student loan debts and buy houses. But at least a sizeable chunk will go toward turning her research into a global reality. Despite her daily battle with Parkinson’s, Chory has spent the last three decades in the lab genetically engineering crop plants like chickpeas and lentils that can pull 20 times the average amount of carbon dioxide from the atmosphere and store it as a cork-like polymer deep underground.

What’s next is scaling up to the planetary level. She’s calculated that converting just 5 percent of the world’s cropland to her plants could get rid of half of global CO2 emissions. But financing field trials and seed production and distribution and farmer outreach is beyond the scope of most basic research funding mechanisms. Which is why she’s hoping the prize money will give her initiative a jump-start to bring in other grants and investors. “I’ll do my best to milk it as best I can,” says Chory, who figures the total cost for launching the project hovers around what Milner paid for his $100 million mansion, located just up the hill from the Ames red carpet. She says she appreciates being recognized, and a reason to go shopping with her family. But while she was happy to attend the evening with her kids, she’s focused on doing something to make the world they’ll inherit a less dangerous place. “I’m trying to do something now for humankind, not just to please by brain or follow a scientific curiosity. I don’t want to leave a crappy planet as my legacy.”

Bargmann, who was on this year’s selection committee for the life sciences, said the prize was, to her, as much about the future, as about moments in the past that changed science forever. “We’re honoring people tonight who totally changed a field; it was one way before they came along, and something totally different afterward.”

For the chromosome theory of human genetic inheritance, i.e. how you got the genes you got, that was Kim Nasmyth, a biochemist from Oxford who figured out how chromosomes separate during mitosis. He thought about brushing off his old wool tuxedo for the event, but ultimately opted for something newer, and less warm. In his lapel he wore a gold pin with a white cross on a red shield—a gift from the city of Vienna, where he used to work. “It’s the only piece of jewelry I own,” he said. “I thought I might as well wear it.”

While he’s thrilled to receive the award, and pay some of the money forward to a foundation that will support the next generation of scientists, he says that recognition should never be the goal of a good researcher. “Ultimately, when you get out of bed in the morning, you just want to know, to understand,” he says. “I think what drives discoveries are the mysteries that can’t be explained.”