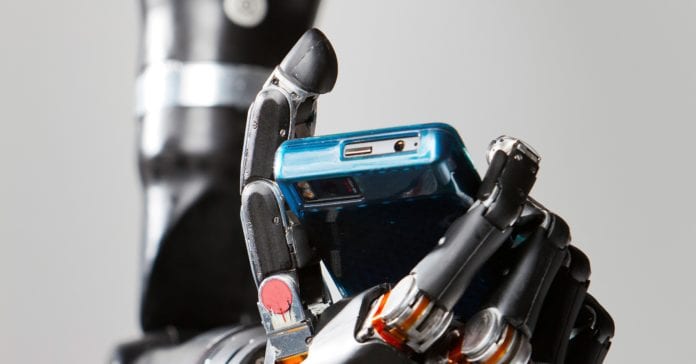 The distance between prosthetic and real is shrinking. Thanks to advances in batteries, brain-controlled robotics, and AI, today’s mechanical limbs can do everything from twist and point to grab and lift. And this isn’t just good news for amputees. “For something like bomb disposal, why not use a robotic arm?” says Justin Sanchez, manager of Darpa’s Revolutionizing Prosthetics program. Well, that would certainly be handy.

Capable of: Touching hands, reaching out
Mind-controlled limbs aren’t new, but University of Pittsburgh scientists are working on an arm that can feel. Wires link the arm and brain, so when pressure is applied, a signal alerts the sensory cortex.

Capable of: Looking for an opportunity
Researchers at Newcastle University have designed a hand with a tiny camera that snaps pics of objects in its view. Then an AI determines an action. Like, grasp that beer and raise it to my mouth.

Capable of: Climbing every mountain
Unlike older lower-limb prosthetics, the Linx can tell when it’s sitting in a chair. At just under 6 pounds, it relies on seven sensors that collect data on activity and terrain, helping the leg adapt to new situations.

Capable of: Making rude gestures
It’s the only prosthetic hand with air-bubbled fingertips—great for typing and handling delicate objects (like eggs). And because individual motors power natural movements, wearers can flip the bird in an instant.

Capable of: Painting masterpieces
Whereas many prosthetics have a stiff thumb, Ottobock designed this model with a secondary drive unit in the fattest finger—making it opposable. So it’s easier to hold, say, a paintbrush. Big thumbs up!

Capable of: Wielding lightsabers
Yep, LUKE as in Skywalker. The Life Under Kinetic Evolution arm is the first muscle-­controlled prosthetic to be cleared by the FDA. With up to 10 motors in the arm, the Force is definitely with this one.

This article appears in the January issue. Subscribe now.

Learn From These Bugs. Don't Let Social Media Zombify You

GizmoCrazed - September 29, 2018 0
You’ve heard that social media is screwing with your brain. Maybe you even read about it on social media. (So meta; so messed up.)...

The Great White Shark Genome Is Here—Superpowers and All