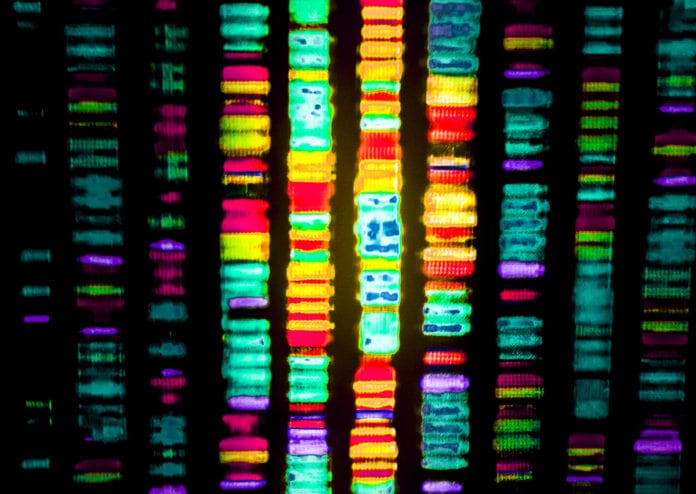 A DNA sequence. The first cell with a working artificial addition to its DNA has been created. (Credit: Gio.tto/Shutterstock)

Scientists have taken another step towards putting two additional letters in the dictionary of life to work.

Researchers at the Scripps Institute have engineered cells to successfully transcribe a brand new artificial DNA base pair and make a never-before-seen protein with it. The breakthrough is part of an effort to expand the library of amino acids that animal cells can work with, potentially leading to the creation of compounds entirely different from those life can produce now.

The work was led by Floyd Romesberg, an associate professor of chemistry at Scripps, and adds to his 20-year effort to create synthetic DNA “letters.” DNA is currently comprised of four nucleotides, or letters: C, G, A and T—C binds to G, A binds to T. These couplings, or base pairs, comprise DNA as we know it. Romesberg and colleagues created two completely new letters, he calls them X and Y, and inserted them into a cell’s genome. Instead of four base pairs, the “semi-synthetic” cell now has six.

This drastically increases the number of codons — you can think of them as genetic “words” — and therefore, the number of things cells can make. Currently, there are 64 different triplet combinations of C-G and A-T possible. Three of those are stop codons, and many combinations are redundant, leaving our bodies with just 20 codons, or words, to make compounds with. Add in another base pair, and the number of potential words increases to 216. That more than triples the total, and the potential applications are vast.

“We will never need more codons,” he says. “We can now write more information in cells than we’d ever want to use.”

In 2014, Romesberg successfully coaxed a cell to incorporate his custom X and Y base pair to its DNA, and found that it would remain there as long as he kept supplying the nucleotides. He’s now shown, in a Nature paper published Wednesday, that cells can not only hold on to the new base pairs, but they can use custom RNA sequences to transcribe codons with these new base pairs into something tangible.

Transcription is the process by which RNA copies bits of DNA and uses them to make things our bodies need. With new base pairs, the cells could make new codons, and those new genetic words held the blueprints for compounds that were previously impossible for cells to make. What’s more, the cells transcribed the new codons just as efficiently as the natural ones.

Adding the base pair to DNA demonstrated that storage was possible, he says, his latest work shows that the information can be retrieved works, and now he must show that cells can actually use the new compounds they make to do something interesting. 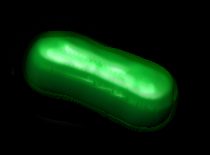 The first semi-synthetic organism, an E. coli bacteria expressing proteins made from “unnatural base pairs.” (Credit: William B. Kiosses)

Romesberg provides a demonstration of this by adding in two new amino acids to a common fluorescent protein called GFP using E. coli bacteria. Bacterial cells with the extra base pair were able to produce amino acids that showed up in the flowing cells, proving that a new compound could make it from DNA to reality in a cell. The potential applications go far beyond glowing proteins, of course. Animal cells are currently only able to produce a finite set of things, limited by the number of genetic words they have to work with.

“We are making amino acids that are not normally made, cells are not capable of storing the information to make them,” Romesberg says.

This could mean new medicines, new nanomaterials, new reagents for chemical reactions. It could also eventually mean cells that can carry out functions no cell today can.

With the mention of new types of cells, thoughts of nightmare science-fiction scenarios are inevitable. Romesberg says that there are significant barriers to these cells ever making it outside the lab, however.

“One thing that’s really important to keep in mind is that we have a fail-safe built into this,” he says. “X and Y are unnatural nucleotides, [they] are not made by the cell. And this is not a “Jurassic Park” situation because these are man-made things.”

In his previous work getting cells to add the X and Y nucleotides into their DNA, he found that the cells immediately purged the base pair from the DNA as soon as he stopped giving it to them. Because these nucleotides aren’t natural, animal cells can’t manufacture them. The only way to keep them in a cell’s DNA is to keep them in the lab where they can be constantly supplied with new materials.

“They are not trivial molecules, they’re unlike anything a cell already makes,” Romesberg says. “It would have to assemble two complete new pathways out of something from which it has nothing similar to.”

For applications like creating new drugs, this would work fine because researchers could just keep giving them the supplies they need. If they escaped, however, the synthetic nucleotide would disappear from their genome.