Antarctic Expedition Launches to Measure Changes in the Ice Sheet 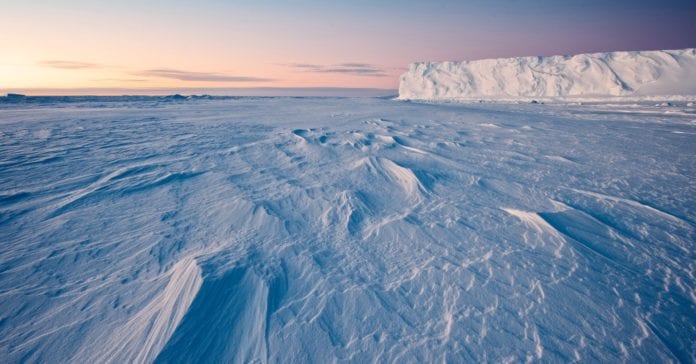 Kelly Brunt won’t be home for the holidays, nor will she be ringing in the New Year at a fabulous party or watching Ryan Seacrest schmooze B-list celebrities on TV. Instead, between December 21 and January 11, she’ll be leading a four-person expedition around the South Pole, sleeping in a small tent mounted on a plastic sled that is pulled by a snowcat. But that doesn’t mean she won’t celebrate—it’ll just be a demure affair, with her crew, a cozy fleece, and a carefully prepared cup of her favorite gourmet coffee.

Brunt is making her tenth trip to Antarctica since 2000. She’s celebrated Christmas and New Year’s five times there, as well as five Thanksgivings and eight birthdays. As a glaciologist, she’s worked at the US main base at McMurdo Station, camped on massive floating icebergs in the Ross Sea, and in 2009, and spent three months with the Australian Antarctic Program on the Amery Ice Shelf.

And this year, Brunt is leading the ground-based team on NASA’s ICESAT2, which is studying changes in the Antarctic ice sheet and how they contribute to global sea level changes.

The expedition will cross 500 miles of crunchy, chunky ice at the bottom of the planet. The massive ice cap that covers the South Pole is more than 10,000 feet in elevation, so the team will have to acclimate for several days at the Amundsen-Scott base before heading out into the “deep field,” which is Antarctic-speak for any place beyond the comfort of a permanent station. Yes, it will be cold, ranging from -20 to -40 degrees Fahrenheit (plus wind chill), but the crew has a combination of extreme polar gear issued by the National Science Foundation, as well as personal favorites from home. For Kelly, it’s a lucky brown fleece that accompanies her on every polar trip.

Over two weeks, the crew will take turns sleeping and working—taking precise measurements of the ice sheet thickness and comparing it to satellite-based measurements to make sure the two agree down to the centimeter scale. At the same time, a NASA aircraft will be flying over the ground crew, using a laser altimeter to triple check the data. Afterward, the pilots get to land at McMurdo and Amundsen-Scott South Pole base for a hot meal, while Brunt and her crew trudge on to the next ground station.

While December is the holiday season in the Northern Hemisphere, it’s a time of intense work for the 1,200 or so American scientists and support personnel on the frozen continent. That’s because December falls in the middle of the austral summer, a time when the Antarctic sun rarely sets below the horizon (it starts in November and lasts until late February). It’s also calm enough to actually move about without getting knocked down by fierce winds that howl during winter months.

Yes, it means they won’t be home for the holidays. But they’re used to it. On Christmas Day, Brunt and her colleagues will probably perform a modest day of work. “I don’t miss the commercialization of Christmas,” Brunt says. “I don’t know how we will celebrate, but it’s hard to do nothing on the field. We will just make an acknowledgement and celebrate where we are without being sentimental that we aren’t with family.”

Brunt and her colleagues began their journey in late November, flying from various points around the US to Christchurch, New Zealand. From there, they boarded a C-17 transport plane for a five-hour flight to McMurdo Station, a town of about 1,100 people on Ross Island, Antarctica. The next leg was a three-hour flight to the South Pole via a ski-equipped C-130.

And there, waiting for the crew at the Amundsen-Scott South Pole Station, was their home for the next two weeks: two PistenBully snowcats pulling specially designed sleds. The sleds are made of a plastic with a density structure that significantly reduces the coefficient of friction, so 10,000 pounds will tow like 1,000. The sleds will be towing essential stuff, like fuel—but they will also carry fully set-up tents, so the researchers don’t have to establish camp every day.

The trip isn’t just a laborious one; it’s potentially dangerous, too. The crew will likely avoid the cracks and crevasses that are often found around the edges of the Antarctic continent—this time, their job is to measure the thickest point of the Antarctic ice sheet. It’s also less windy at the South Pole than other places, according to Forrest McCarthy, a mountaineer and safety guide assigned to the ICESAT2 team. But there are still plenty of equipment hazards. “When you think about fuels in the cold temperature, the fuel we use is at minus 40 degrees and could lead to instant frostbite,” McCarthy says. “If you spill it on yourself you will be in a bad way.” Any accident will be days away from medical help or evacuation. That means he’s got to keep everyone attentive, focused on their work, and able to get along when things get tough.

“Group dynamics is really important,” says McCarthy, who works as a fishing and mountain guide in Wyoming and Alaska during the rest of the year. McCarthy is a self-described Grinch, but he clearly gets along with Brunt, who he’s worked with since 2000. “When people get along, you end up being more productive. She’s got a good sense of humor and highly competent. That is one reason I signed up for the mission.”

On Christmas, McCarthy will call his wife back home on a satphone—but he doesn’t miss being home. Each year, he feels the magnetic draw of the Antarctica’s stark beauty. “I love Antarctica and the culture of exploration and science,” McCarthy says. “It is one of the last great wildernesses on Earth.” Although even the globe’s most remote locations can use a bit of comfort. Along with his safety gear, extra clothes and food, McCarthy packed an Italian moka express pot to make everyone a holiday latte.