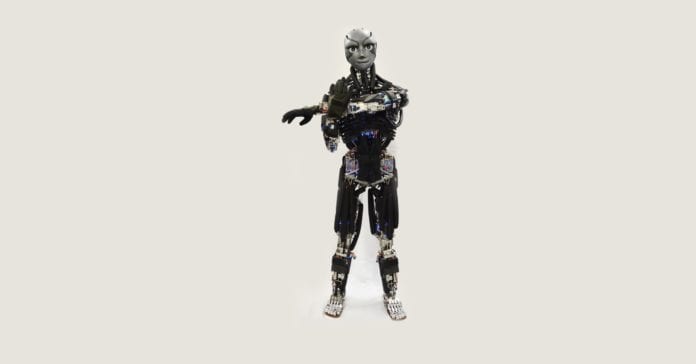 Continuing their quest to make me feel even worse about being a lazy human, robots can now do sit-ups and push-ups and something called a back extension, which I had to look up because that’s how lazy I am.

Today in Science Robotics, researchers from the University of Tokyo show off a humanoid that is strikingly lifelike not just in how it looks, but how it moves. The machine is a radical departure from the stiff, bumbling humanoids that have so far done a whole lot of falling on their faces. (Props to Boston Dynamics’ latest iteration of Atlas, though, which can do backflips now.)

Kengoro is its name, and badminton is its game, even though it’s not super great at it. Oh, also, it can sweat.

The idea with Kengoro, and its older iteration Kenshiro, is to replicate the human body as closely as possible. The researchers modeled Kenshiro after a 13-year-old male, so it weighs in at 115 pounds. Kengoro is slightly heavier. And the ratio of things like foot length and shoulder height to human figures are all almost exact for both robots.

Let’s focus on Kengoro though, since it’s more newfangled. Your typical humanoid robot moves thanks to actuators—a fancy name for a motor combined with a gearbox—in its joints. Very inhuman. Kengoro’s 116 actuators instead pull on wires that mimic the contraction of human muscles. These “muscles” are even arranged like they are in the human body (though the analog of the human calf muscle is made of two actuators to produce enough force). Think of it like the world’s most advanced marionette.

Actuators, though, inevitably produce heat, in Kengoro or any other robot. So Kengoro sweats. Water circulates through its metal frame, which is made of a special porous aluminum. This allows the heated water to escape as vapor, thus releasing heat from the motors. As an added bonus, that aluminum gives the robot a sturdy frame.

But Kengoro is also extremely flexible, with six times the degrees of freedom as traditional humanoids. It can move its head from side to side like it’s cracking its neck. It can even stand on its tippy toes. That’s all thanks to those “muscles,” in contrast to just a handful of motors powering the joints of a more traditional humanoid. Also, Kengoro has a flexible spine. That’s why it can do sit-ups that look like human sit-ups. Try getting a traditional humanoid to do this and it’ll fold more like a Lego minifigure.

Kengoro, though, does lose out on the rigidity of its Lego-esque comrades. Boston Dynamics’ Atlas can do backflips because it doesn’t crumple when it lands. Still, Kengoro is no weakling—it can lift its own body weight in a pull-up.

So this bot is a bit more loosey-goosey, fine. But its lower-power profile means it can afford to slim down to more accurately mimic a human. That could be useful for a number of reasons, not all of which Kengoro will want to hear. For one, you could turn it into a very useful crash dummy. Modern dummies are packed with sophisticated sensors, sure, but they’re still passive. Meaning, Kengoro could get in there and better simulate how a real live human body responds to a crash. The cost of the robot would have to come way down for that to be feasible, though. In the nearer term, the robot could inform the design of robotic limbs.

And while humanoids seem silly right now, they’re only going to get more sophisticated. Less … face-planty. At some point, they may come in handy as rescue robots, navigating environments other machines can’t. After all, humans built this world for humans. To make sense of, say, a melted-down nuclear facility, it’s probably best if you have legs to climb stairs and hands to turn valves.

For now, though, it’s push-ups and back extensions for Kengoro. Gotta start somewhere.