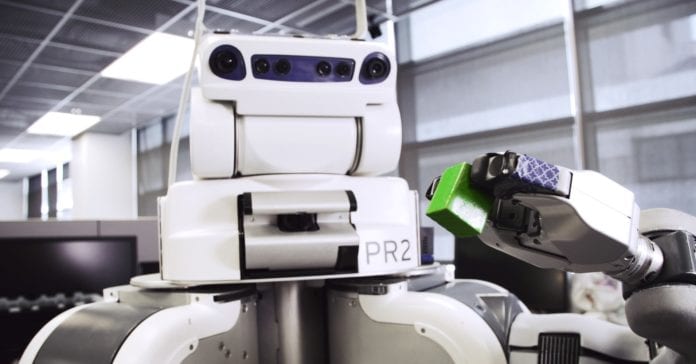 The world seemed different this year, yes? Like something strange has been walking and rolling among us? Like we’re now sharing the planet with a new species of our own creation?

Well, we are, because 2017 was the year that the robots really, truly arrived. They escaped the factory floor and started conquering big cities to deliver Mediterranean food. Self-driving cars swarmed the streets. And even bipedal robots—finally capable of not immediately falling on their faces—strolled out of the lab and into the real world. The machines are here, and it’s an exhilarating time indeed. Like, now Atlas the humanoid robot can do backflips. Backflips.

“2017 has been an amazing year for robotics,” says roboticist Sebastian Thrun, a pioneer of the self-driving car. “Why 2017? Why did it take us so long?”

Well, it was a confluence of factors, namely the cheapening of sophisticated hardware combined with better brains. “In the past, in robotics we had not-so-smart software with hardware that would break all the time, and that’s not a good product,” Thrun says. “It’s only recently that both computers have become smart enough and that robot hardware has become reliable enough that the very first products start to emerge.”

Perhaps the biggest leap in hardware has been sensor technology. To build a robot you don’t have to babysit, you need it to sense its environment, and to sense its environment it needs a range of sensors. Not just with cameras, but with lasers that build a 3-D map of the robot’s surroundings. These kinds of components have gotten both far more powerful and far cheaper.

“I kind of talk about this finally being the golden age of robotics, and that means that for the first time in the last 12 months or so you see robots really becoming prolific,” says Ben Wolff, CEO of Sarcos Robotics, which makes the most bonkers robot arms you’ve ever seen. “And I think it’s because we’re finally at that crossover point, where the cost has come down of components while the capability of the components has increased sufficiently.”

Like, come down big time. One sensor cost Sarcos a quarter of a million dollars in 2010. Today, it’s $8,000—that’d be 3 percent of the cost just seven years ago. Other components like actuators—the motors in the joints of something like a robot arm—are also falling steadily in cost. Today, an actuator that once cost $3,500 is closer to $1,500. And it’s actuators, perhaps more than any other component, that promise to take robotics to the next level in the very near future.

Loaded with cheaper, supercharged sensors, robots are finally capable of tackling the uncertainty of the human world. Whether humans actually want that is another question. Take delivery robots, for instance. In San Francisco’s chaotic Mission neighborhood this year, a robot called Marble began picking up food and delivering it straight to customers’ doors.

Yet it’s not navigating the relatively structured streets—with lanes and stop signs and such—but sidewalks. That means it has to dodge pedestrians and buskers and discarded furniture, then still be able to cross the street and deal with cars. It ain’t perfect, which is why a human handler follows the robot to remote-control it when it gets in trouble (when WIRED got a demo in April, it nearly ran down a dog). That safeguard wasn’t enough for the SF Board of Supervisors, which earlier this month voted to severely restrict the operation of the machines.

Regulations aside, robotics are only set to encroach further on human spaces. “In the past we had robots that were novelty,” says Wolff. “We certainly had robots that could do repetitive tasks bolted to the floor for years and years. But what’s changed is we’re now talking about robots that are mobile in nature.”

Much of that has to do with the robots’ bigger brains. It takes a whole lot of processing power for a robot to eyeball a person and navigate around them, while at the same keeping on its trajectory and avoiding other humans. Luckily, better chips mean all of these calculations can now happen aboard the machine, as opposed to giant computers doing the processing in the cloud. Specifically, the smartphone revolution has helped shrink down processors while making them burlier and cheaper and more energy-efficient. Perfect for little robots like Kuri.

So where do we go from here? And I do mean we. Our human brains tend to anthropomorphize anything that remotely seems like an intelligent agent, so it’s tempting to form bonds with the machines, especially when they’re “cute” and “lovable.” I mean, back in August it happened to me: I told a robot I loved it just to get its attention. Those human-robot relationships are primed for ethical upsets. Imagine a child forming a bond with a highly intelligent doll. At some point, the manufacturer might exploit that relationship by having the doll ask the kid if they want an over-the-air update that’d make the robot even more fun—for the low, low price of $49.99.

It’s early, I know—I just got through saying the robots have arrived. But as someone who’s experienced the surprising psychological draw of robots, I want to make this clear: The robot-human relationship is bizarre and fraught with potential misadventures. Better to think of this now than have a doll suddenly bilking you out of money.

Why Apple Can’t Tackle Digital Wellness in a Vacuum

GizmoCrazed - June 5, 2018 0
On Monday at its annual developer's conference, Apple unveiled several new features designed to help users understand and manage the time they spend on...

You Are Getting Sleepy—Tagged Proteins May Point to Why