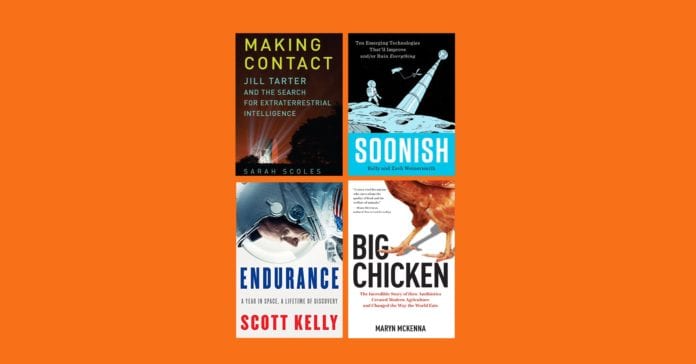 The holidays are prime reading season. All that travel and post-meal lounging will give you plenty of time to plow through the books that have been stacking up on your bedside table for the past year. Just be sure to grab a good one. Your body will already be full of empty calories—you don’t want your brain to be stuffed with junk, too.

When Scott Kelly returned to Earth in March of 2016, he became the proud possessor of a major space record: He had completed the single-longest spaceflight—340 days—ever undertaken by an American. In his new book, Endurance, the veteran astronaut dishes on what it takes to prepare for and live in space for that long. The upshot: Space is weird. And don’t you want to know the details? Like, oh, I don’t know, the fact that the International Space Station smells like jail? Yes. Yes you do.

Predicting the future is thankless and hard and often ill-advised—but that didn’t stop scientist Kelly Weinersmith and cartoonist Zach Weinersmith from trying, with this wild glimpse into a future that may or may not involve space elevators and brain-computer interfaces and programmable matter. In it, they sift through mountains of literature and pick the brains of the researchers at the forefront of things like bioprinting (like 3-D printing, only more bio) and augmented reality (like reality, only more augmented), turning a skeptical yet exuberant eye toward the technologies of tomorrow.

Making Contact: Jill Tarter and the Search for Extraterrestrial Intelligence by Sarah Scoles

If humans ever find aliens—or if aliens ever find us—it will likely be a consequence of the work of Jill Tarter. A former director of the SETI Institute, a formidable radio astronomer, and the inspiration for the main character in Carl Sagan’s Contact, Tarter has devoted her life and work to the search for life in space. In Making Contact, WIRED contributor Sarah Scoles interweaves Tarter’s story with the science, philosophy, and politics that underpin the ongoing quest to understand life in the universe and humanity’s place with in it—whether we’re alone or not.

A science-y cookbook? Yes. A science-y cookbook. Samin Nosrat’s ode to its eponymous components is light on recipes and heavy on insightful exposition vis-à-vis salt, fat, acid, and heat—the fundamental ingredients to any dish. By understanding how they act and interact, she claims, you can learn to not just follow instructions but truly cook, in that elusive, improvisational way you know you fantasize about. Outstanding illustrations, graphs, and charts from Wendy MacNaughton up the informational ante, without weighing down the culinary knowledge Nosrat dishes out.

Why Time Flies: A Mostly Scientific Investigation by Alan Burdick

Is there a more well-worn subject than time? I submit that there is not. It routinely ranks as the most commonly used noun in English. Aristotle ruminated at length on its subjectivity. And physicists, philosophers, and neuroscientists quibble over its qualities to this day. But in the hands of New Yorker staff writer Alan Burdick, the topic of time is revivified through this compelling mix of personal experiences and expertly translated research findings.

Spineless: The Science of Jellyfish and the Art of Growing a Backbone by Juli Berwald

Before she wrote for publications like National Geographic, Nature, and WIRED, Juli Berwald was an ocean scientist. But jellyfish—those gelatinous, pulsating, invertebrate aquatic creatures—drew her back to the sea. Jellyfish, it so happens, have experienced a population explosion in recent years, even as many other components of the oceans’ ecosystems have floundered. In Spineless, Berwald sets out to understand why jellies have flourished, and what their unexpected response to a changing planet could mean for the rest of us.

The River of Consciousness by Oliver Sacks

The second of Oliver Sacks’ posthumously published works (the first, Gratitude, comprised four essays the neurologist wrote following the cancer diagnosis that would end his life), The River of Consciousness collects 10 essays on subjects ranging from the fallibility of memory to Sigmund Freud’s early studies on fish. Fans of the good doctor will appreciate the chance to revisit a collection he curated shortly before his death: The writings are stitched through with Sacks’ characteristic curiosity and verve, weaving esoteric research, incisive observations, and intimate anecdotes into lucid expositions on the natural world and those who seek to understand it.

To understand modern agriculture, one must consider the chicken. In this wide-ranging exposé, journalist Maryn McKenna details how growth-boosting antibiotics plumped a little backyard bird into the fat fowl we know today. By tracing poultry’s rise, the book reveals how the most popular meat in America cleared the way for industrial farming practices and a rapidly proliferating slate of drug-resistant diseases. Equal parts informative, propulsive, and frightening, McKenna’s work is the kind of public health journalism you’ll actually want to read.