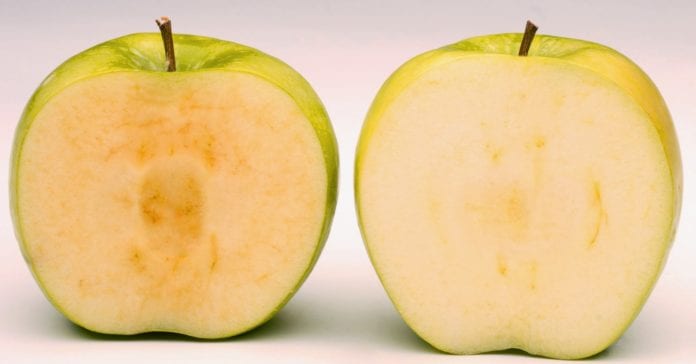 On the last Monday of September, 32 field workers stepped onto a 15-acre experimental plot in an undisclosed part of Washington and made apple harvest history. The fruits they plucked from each tree were only a few months old. But they were two decades and millions of dollars in the making. And when they landed, pre-sliced and bagged on grocery store shelves earlier this month, they became the first genetically modified apple to go on sale in the United States.

The Arctic Apple, as it’s known, is strategically missing an enzyme so it doesn’t go brown when you take a bite and leave it sitting out on the counter. It’s one of the first foods engineered to appeal directly to the senses, rather than a farmer’s bottom line. And in a bid to attract consumers, it’s unapologetic about its alterations.

The apple has courted plenty of controversy to get where it is today—in about a hundred small supermarkets clustered around Oklahoma City. But now that it’s here, the question is, will consumers bite? Dozens of biotech companies with similar products in the pipeline, from small startups to agrochemical colossuses like Monsanto and Dupont are watching, eager to find out if the Arctic Apple will be a bellwether for the next generation of GMOs, or just another science project skewered on the altar of public opinion.

Neal Carter bought his first apple orchard in 1995, up in the gently sloping valley of Summerland, British Columbia. When he started, the future president of Okanagan Specialty Fruits didn’t have grand plans for upending the industry. But in his first few seasons he was struck by just how many apples (and how much money) he had to throw away on account of browning from the routine bumps and jostles of transit and packaging. Most years it was around 40 percent of his crop.

When you cut an apple, or handle it roughly, its cells rupture, and compounds that had been neatly compartmentalized come in contact with each other. When that happens, an enzyme called polyphenol oxidase, or PPO, triggers a chemical reaction that produces brown-colored melanin within just a few minutes. Carter thought there had to be a way to breed or engineer around that. So when he came across Australian researchers already doing it in potatoes, he wasted no time in licensing their technology, a technique known as gene silencing. Rather than knocking out a gene, the idea is to hijack the RNA instructions it sends out to make a protein.

The problem, Carter found out later, was that apples were a lot more complicated, genetically speaking, than the potato. In taters, the browning enzyme was coded into a family of four sub-genes that were chemically very similar. All you had to do was silence the dominant one, and it would cross-react with the other three, taking them all down in one go. Apples, on the other hand, had four families of PPO genes, none of which reacted with the others. So Carter’s team had to design a system to target all of them at once—no simple task in the early aughts.

To do it, the Okanagan scientists inserted a four-sequence apple gene (one for each member of the apple PPO family) whose base pairs run in reverse orientation to the native copies. To make sure it got expressed, they also attached some promoter regions taken from a cauliflower virus. The transgene’s RNA binds to the natural PPO-coding RNA, and the double-stranded sequence is read as a mistake and destroyed by the cell’s surveillance system. The result is a 90 percent reduction in the PPO enzyme. And without it, the apples don’t go brown.

It took Okanagan years to perfect the technique, which was subject to regulatory scrutiny on account of the viral DNA needed to make it work. Today, with the arrival of gene editing technologies like Crispr/Cas9, turning genes on and off or adding new ones has become much more straightforward. Del Monte is already growing pink pineapples, Monsanto and Pioneer are working on antioxidant-boosted tomatoes and sweeter melons, J.R. Simplot has a potato that doesn’t produce cancer-causing chemicals when it’s fried. Smaller startups are busy engineering all kinds of other designer fruits and veggies. And it’s not obvious how exactly this new wave of gene-edited foods will be regulated.

Gene editing gets around most of the existing laws that give the Food and Drug Administration and the Department of Agriculture authority over biotech food crops. In January, the Obama administration proposed a rule change that would look more closely at gene-edited crops before automatically approving them. But earlier this month the USDA withdrew that proposed rule, citing science and biotech industry concerns that it would unnecessarily hinder research and development.

Carter, whose fruits were cleared by the USDA and the FDA in 2015, says his Arctic Apples are evidence the existing process works. But there were times when he wasn’t sure they were going to make it. “It took us close to 10 years, where we had the apples, we had the data, we kept submitting answers to questions, and then wouldn’t hear anything back,” says Carter. “It’s a bit of a black hole, and that whole time you’re not sure if you’re going to even be able to pay your electricity bills and keep your lights on.”

Talking to Carter, Okanagan still feels like a small family business, especially when he says the word “process” with that endearing, long Canadian “O”. This year’s Arctic Apple harvest amounted to 175,000 pounds—just a drop in the apple bucket. But shortly after its US regulatory approvals, his company was acquired by Intrexon Corporation, a multinational synthetic biology conglomerate that owns all the other big-name GMOs you might have heard of. Like Oxitec’s Zika-fighting mosquitoes, and the fast-growing AquAdvantage salmon.

That’s one reason customers might be wary of the Arctic Apple. Another is transparency. While Carter says they’re taking that literally—the bags have a plastic see-through window to view the not-brown slices for yourself—others say Okanagan hasn’t gone far enough in telling people how its apple was made. The letters G-M-O don’t appear anywhere on the bag. Instead, in accordance with a 2016 GMO food labeling law, there’s a QR code, which you can scan with a smartphone to get more information online.

Some consumer groups think that doesn’t go far enough, but scientists counter that they’re focusing on the wrong things. “Breeding technologies are just a distraction from the big questions,” says Pam Ronald, who studies plant genetics at the University of California and who is married to an organic farmer. “Like, how do we produce enough food without using up all our soil and water? How do we reduce toxic inputs? Those are the grand challenges of agriculture today, that technology can help address.”

Ronald works on food crops designed to fight food insecurity in the developing world—like drought-resistant corn and vitamin-enriched rice. When she first heard of the Arctic Apple at a conference in 2015, she wasn’t that impressed. It’s not exactly a famine-fighter. But when Carter sent her a box of fruits a few weeks later, her kids had a different take. They brought them into school to show to their biology classes, and according to Ronald, their classmates just went wild. “Kids really hate brown apples, and it made me realize I don’t really like them either,” she says.

Living where food is abundant, most people don’t really grasp how GMOs touch their lives. “It’s that distance that consumers are removed from agriculture that creates the fear,” says Ronald. “But if you see a brown apple you’re probably aware that you throw it away, and maybe you feel guilty about that. Connecting biotechnology to something you can see and feel and taste like that could be transformational.”

Sponsored: Top Five IoT Trends in 2016 That You Should Care...

GizmoCrazed - March 23, 2016 0
The Internet of Things is the start of the next industrial revolution, according to a new report from AIG. The report entitled, “The Internet...

How to avoid online scams