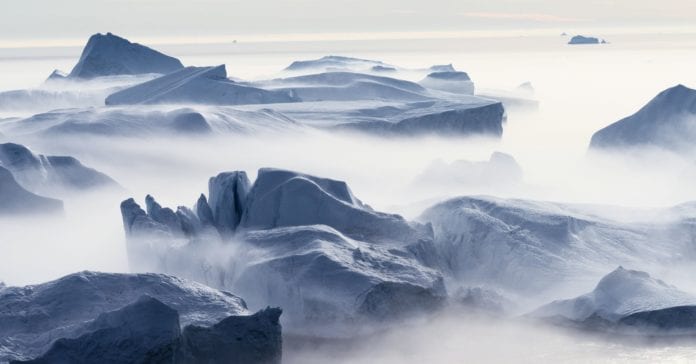 From the air, the largest glacier on the biggest ice sheet in the world looks the same as it has for centuries; massive, stable, blindingly white. But beneath the surface it’s a totally different story. East Antarctica’s Totten Glacier is melting, fast, from below. Thanks to warm ocean upwellings flowing into the glacier—in some places at the rate of 220,000 cubic meters per second—it’s losing between 63 and 80 billion tons of previously frozen fresh water every year.

This matters because Totten glacier and its ice shelf are the only thing keeping an area of ice larger than the state of California from breaking up. If all that ice were to end up in the ocean tomorrow, sea levels would rise by 10 to 20 feet—flooding San Francisco’s iconic Ferry Building, most of Manhattan’s Lower East Side, and the Lincoln Memorial in Washington, DC.

In some ways, this should come as no surprise. For decades researchers have been projecting that the planet’s polar ice reserves will wither in the face of rising temperatures. But more recent satellite data, models, and fieldwork have revealed that it’s happening faster than anyone expected. And increasingly, scientists are finding evidence to pin that Antarctic acceleration on a less obvious aspect of climate change: wind.

Last year, researchers from the US and Australia discovered that churn from deep undersea canyons was bathing the underside of Totten glacier in water warm enough to melt it. But the mechanisms were still a mystery. On Wednesday, they published a study showing that westerly winds blowing off the coast of Antarctica are driving the upwelling, and leading to faster ice flow on the glacier.

To get a feel for why that’s not normal, it helps to understand what’s going on at the ocean-ice interface. As glaciers and ice shelves melt, they deposit their cold, fresh water onto the ocean surface, where it sits above warmer, saltier, denser water. It’s not a gradual transition, but a sharp one. Like when your bottle of salad dressing settles in the refrigerator and you have to shake it back up before serving. That line is called a thermocline, and scientists can measure exactly where it is in the water column. If it rises up to where the glacier is, that’s when you get melting.

Surface wind causes warm water to upwell at the continental shelf break, the warm water melts Totten Ice Shelf from below, and the glacier responds by speeding up.

Chad A. Greene, University of Texas Institute for Geophysics

By comparing satellite images with oceanic wind records and water temperature and salinity data streaming in from a sensor floating nearby, the team was able to track the thermocline at Totten over time. They found that when the winds blew strong from the west, warm water rushed up and into the glacier. When the winds blew from the east, the thermocline sank back down and melting ceased.

“As a pure scientific curiosity, it’s really fascinating that CO2 can lead to sea level rise not only by heating up the air directly and melting the glacier from above but also just from wind moving heat around the ocean to melt it from below,” says Chad Greene, a research scientist at the University of Texas and lead author of the study. “But then of course there’s a gloom and doom component to this discovery as well.”

That’s because westerly winds along the East Antarctic coast are projected to get a lot stronger over the next 100 years. Gerald Meehl, a senior scientist at the National Center for Atmospheric Research, explains that increasing concentrations of greenhouse gases aren’t just raising air temperatures. They’re shifting and intensifying the westerly wind belt that circles Antarctica. “Future climate projections show an even stronger positive phase of the Southern Annual Mode, which means stronger surface west winds occurring farther south,” he says. “That would drive those winds closer to Antarctica and provide an ongoing mechanism for melting more ice and producing greater sea level rise.”

And not just a little bit more ice, but like, a lot more ice. That’s thanks to some topographical wonkiness unique to Antarctica. The bedrock on the southernmost continent doesn’t slope up like a mountain as you go from the coast to the interior. Instead, it tilts downward, in places even dropping up to a few miles below sea level. Invading waters would quickly flow downhill, seeping further and further inland, and causing ever-larger hunks of ice to flow faster out into the ocean.

“What that means is as you melt it back at the edges, even a little bit, by bringing in that warm water, you really quickly get a runaway scenario,” says Paul Spence, an oceanographer at the University of New South Wales in Sydney. Earlier this year he published a study in Nature Climate Change that looked at similar upwelling patterns causing drastic melting in the West Antarctic, where most ice sheets and glaciers have their base below sea level. “This has happened in the past on pretty quick timescales. It might take thousands of years for a glacier to form, but they can totally collapse in just a few years. That’s what we’re most concerned about.”

Ocean water has already carved contoured troughs that extend all the way from the edge of Totten’s ice shelf to its bedrock 77 miles inland, and as deep as 2 miles below sea level. The last time Totten Glacier—whose melting could raise sea levels as much as all of West Antarctica—collapsed into the ocean, about 3 million years ago, it raised global waters by 20 to 30 feet.

Understanding the chances of that happening again is going to take some serious supercomputing. But the interplay between wind, water, and ice in the Antarctic is only just beginning to be incorporated in global sea level projections. When the Intergovernmental Panel on Climate Change put out its most recent report in 2013, it didn’t include any information on changing ice sheet melt in the Antarctic—partly because no one understood the mechanisms very well back then, and partly because computers just weren’t powerful enough. At the time, the IPCC estimated that sea levels would rise 3.3 feet by 2100.

But some scientists now think that number should be double. By marrying some of the previously underappreciated local ice sheet dynamics with global climate data, a 2016 analysis in Nature found that Antarctica alone could contribute an additional 3.3 feet of water before the end of the century.

It’s just a start. There’s still a ton scientists don’t know about how winds will change in Antarctica, or anywhere else for that matter. And they say that’s probably the single-most significant unknown in the already hyper-complicated arithmetic of predicting sea level rise. Does the flap of a butterfly’s wings in Brazil set off a continent-wide collapse of ice into the Southern Ocean? Maybe. But only if it blows from the west.