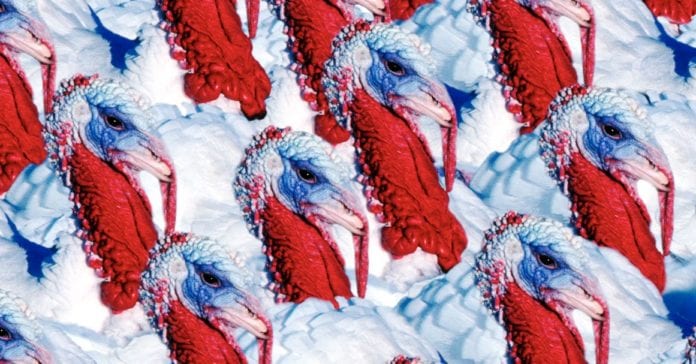 David Pitman is a third-generation poultry grower, raising chickens and turkeys with his brother and parents on a property east of Fresno that his grandfather founded in 1954. They’re independent farmers—instead of raising birds for a corporation, they sell directly to wholesalers and stores—and their farming style reflects that freedom. They buy turkeys from a variety of breeds, feed them organic grains, and let them wander over pasture, choices that make the final product very different from the broad-breasted birds raised at industrial scale by national meatpacking companies.

In one way, though, both products are more alike than they are different. The Pitmans have always raised their birds without putting antibiotics in their feed. Now the rest of the turkeys—and chickens and cattle and pigs—raised in the United States are moving that way too, thanks to federal regulations that went into effect January 1, 2017.

The turkeys that will appear on tables across the country this week were hatched after those rules became final, which makes this, aspirationally at least, the first antibiotic-free Thanksgiving. But farmers like Pitman who have done without the drugs for years say that, as desirable as that may be—for animals, and also for people threatened by the antibiotic-resistant bacteria that result—it’s harder than it looks.

The movement to raise meat without routine antibiotics was started three years ago by Perdue Farms, the fourth-largest chicken company in the United States. Other poultry companies followed, making “no antibiotics ever” chicken commonplace now. But “turkeys are much more difficult, probably 10 times more difficult, to raise antibiotic-free than chickens are,” Pittman says. “Any little thing throws them off.”

Maybe a little background is in order. Antibiotics came on the market in the 1940s, and before that decade was over, farmers had begun adding low doses of the drugs to animal feed, first to make livestock put on weight faster and then to protect them from diseases as growers packed more animals onto farms.

Even though antibiotics were new, scientists already realized that drug resistance could develop. Alexander Fleming, the discoverer of penicillin, warned when he received the Nobel Prize in 1945 that bacteria might evolve defenses that would protect them against antibiotics’ killing effect. But the doses being used in livestock were so small—10 grams of drug per ton of feed for growth promotion in the early days, nowhere near enough to cure an infection—that no one expected resistance to be a problem.

That turned out to be a bad guess. By the 1950s, doctors and microbiologists were identifying drug-resistant foodborne infections such as Salmonella and E. coli in people. The link, they realized, was livestock’s gut bacteria. When the animals ate the antibiotics, some gut bacteria acquired resistance, and others with pre-existing protections survived and reproduced. And when those animals were slaughtered, the resistant bugs contaminated their meat.

To prevent outbreaks, the Food and Drug Administration tried in 1977 to yank the licenses it had given drug companies to sell antibiotics to farmers, but Congress interfered. That started a stalemate that lasted for decades—until, in late 2013, the Obama administration put up a new set of rules.

The rules made the weight-gain doses, called growth promoters, functionally illegal in the US. The agency didn’t ban doses to prevent disease, but it put them under the control of veterinarians. The FDA argued that veterinarians could be trusted to test animals for disease, to choose the right drug for whatever was going on, and to use the drugs for the shortest possible amount of time—all precautions that were supposed to reduce the risk of resistance.

The new rules are porous, though. About a third of livestock antibiotics don’t have limitations on how long they can be used, which means they could promote resistance. And federal data isn’t granular enough to prove that meat producers are complying.

Companies’ marketing makes it look as though they are following the new rules. Tyson announced last year that it is launching a line of pork raised without routine antibiotic use. Cargill took growth promoters out of its turkey in 2014 following Perdue’s announcement, and created a new label for turkeys raised without preventive antibiotics; Butterball did the same this year. Hormel Foods acquired the no-antibiotics-ever processed-meat company Applegate, and conducted what it calls a “raised-without-antibiotics pilot study” for its main turkey line, Jennie-O.

“What I am seeing—and this is based primarily on my work on the poultry industry but with knowledge of other commodities—is that the implementation of (the FDA rules) have had a very positive impact on antimicrobial stewardship,” says Randall Singer, a professor of epidemiology at the University of Minnesota College of Veterinary Medicine who is conducting a multi-year study of poultry industry antibiotic use.

But chicken’s rapid move away from antibiotics may have raised expectations unfairly high, he adds. “A tom turkey may have a lifespan of 18 to 20 weeks. Broiler chickens get killed at six, maybe eight,” he says. “When you put an animal out that long, the chances of disease increase.”

And that’s what turkey producers are struggling with: not foregoing no-longer-legal growth promoters, but deciding how much to dial back on the legal preventive use that still may foster resistant bacteria. Still others are figuring out whether they can go completely antibiotic-free.

In the northwest corner of Iowa, the proprietors of Moline Brothers Farms are weighing those risks. Brad and Grant Moline and their father John, who raise turkeys for the farmer-owned West Liberty Foods cooperative, had to euthanize all 56,000 birds on their property when avian influenza swept through the Midwest in 2015. It was the largest animal-disease outbreak ever recorded in the United States, and killed or forced farmers to destroy more than 7 million turkeys (and 43 million laying hens).

Antibiotic use isn’t directly connected to avian influenza—antibiotics don’t work against the virus. But the sense that an outbreak could sweep up out of nowhere leaves turkey producers cautious about renouncing the drugs for good.

“On our farm, we are making steps each and every flock to put less and less antibiotics in our birds,” Brad Moline told me. “We know consumers want it. We know we need to go in that direction for food safety and for the fact we want antibiotics to work down the road, for future generations. We can see the writing on the wall.”

West Liberty has offered its farmers a certification program that would allow them to market their birds as fully antibiotic-free. But the Molines held back, wanting to preserve the option of trying to cure a disease if one ever surfaces again. “We took such a big hit with bird flu, we weren’t ready to take that risk all at once,” Moline says.

Still, new practices—water-purification systems and air-quality monitors—have brought them closer to being antibiotic-free. “We have had a couple flocks that would have qualified as ABF or almost,” he says, “where in maybe one out of our four barns, we might have a hiccup of disease that needs some treatment.”

All of this makes reading the labels on your Thanksgiving turkey more complicated than it might seem. Label claims—“no antibiotics ever,” “raised without antibiotics,” “no growth-promoting antibiotics”—attest to what producers are doing now. But they’re also markers of an industry in transition—and signposts for where it wants to go.