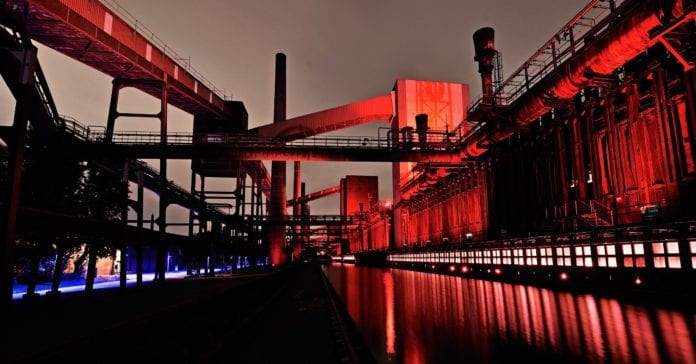 In many ways, Essen is the envy of cities trying to move past their industrial days. Once the steel and coal center of Germany, Essen’s economic success in the early 20th century was evident in the dust blanketing the city and sulfur filling the air with the constant stench of rotten eggs. By one resident’s account, coal miners permanently wore black smudges across their faces, earning them the nickname waschbar, or “raccoons.”

By the 1980s, globalization halted much of Essen’s production, and nearly all of the coal mines had closed. The city had to reinvent itself—starting with its environment.

Today, local leaders embrace the phrase, “from green to grey to green again.” Essen’s massive efforts to clean the air and waterways—particularly the Ruhr River, which only recently opened up to swimmers after being closed for decades because of pollution—led the European Commission to declare the city the European Green Capital for 2017.

Yet at last week’s COP23 climate conference in Bonn, Germany, Essen’s representative was all ears as officials from other post-industrial cities shared their stories. Speakers included representatives from Pittsburgh, Cincinnati, and Beijing’s E-Town (short for Economic-Technological Development Area)—all cities that make up the new Urban Transitions Alliance.

The alliance, launched at the conference and organized by the Local Governments for Sustainability, brings together eight cities that have industrial legacies. On Friday, the members held their first (private) workshop at ICLEI’s office, where they honed in on the common challenges to making their cities both sustainable and economically viable at a time when climate change dominates local agendas.

The group agreed on four targets: creating job opportunities for people of all skill levels, transitioning to renewable energy sources, incorporating green infrastructure, and—at the urging of Essen, which is still mostly car-centric—changing the way people think about mobility.

As a group, these cities have the “blueprint” for teaching other cities how to tackle climate change, said Grant Ervin, the chief resilience officer of Pittsburgh. “Whether it’s developing adaptation strategies for weather events or reengineering the utility grid to integrate more renewables, we can replicate those in cities across the world,” he told CityLab, speaking from the conference.

Like Essen, Pittsburgh has been rebuilding its economy since its steel industry collapsed more than three decades ago, resulting in the loss of some 150,000 manufacturing jobs in the 1980s and a 30 percent decline in the city population between 1970 and 1990. The city now boasts high-skilled workers and world-class research institutions, which helped attract tech giants like Uber and Google. It’s also gone green, falling from the third most-polluted city in the US to the eighth, according to one ranking by the American Lung Association.

Essen and Pittsburgh still have a lot to learn from the other members of the Alliance. Pittsburgh, despite its “coolest neighborhoods” designation, continues to deal with aging infrastructure and widespread social inequities across race, class, and gender. And Essen still struggles to turn a profit from its green initiatives as it grapples with 11 percent unemployment—almost three times the national rate, which fell to a record low this year.

“We also have to get rid of old structures, change the traffic and energy systems, and there’s a big change needed even in the minds [of residents],” said Sebastian Schlecht, project manager of Essen’s European Green Capital initiative who is also coordinating the city’s role in the Alliance. “And we cannot [find] all the solutions on our own.”

Perhaps the most valuable lessons for the two cities may come from a cluster of manufacturing parks tucked inside the southeast suburbs of Beijing. It’s only been 25 years since the capital’s E-Town, as it’s called, was transformed from rural farmland to a leading hub for China’s electronics and IT industries. The area has attracted more than 80 global companies, from Mercedes-Benz to General Electric to Walmart, and is aiming to be the country’s center for innovation.

“The folks [in E-Town] have been putting a lot of effort into future-proofing high-tech industries,” said Roman Mendle, the program manager of the Alliance at ICLEI. “So I would expect that area is the most advanced in terms of [working with] investors, which certainly can be a valuable experience for a city like Essen.” Meanwhile, in trying to foster a more livable environment for residents, the team behind Beijing’s E-Town can certainly learn a lesson from Essen’s success in making one of its most polluted rivers swimmable again.

But this collaboration is about more than just swapping technology solutions and project ideas, Mendle said, adding that the inaugural meeting was also a valuable “reflection exercise” for members. “It’s really about bringing together different ways of thinking because of the different background that each city has,” he said. That means discussing why certain strategies fail or succeed and how they can be adopted in different cities.

There’s an understanding that “we all operate within different government structures, different units of government, and different departments within the city,” Ervin added. “It’s not just about the topical items, but the tactical items as well. So how you might be organizing your team, or working with a vendor, or managing a community engagement process.”

The Alliance, which Mendle hopes to grow, won’t meet again until next year at the ICLEI World Congress in Montreal. Until then, Mendle said they have more than enough materials to sift through and digest, including a list of strategies and projects that are either in development or being revised. The next step is to figure out which ones stand out as ideas that will provide those valuable lessons, and how they’d work in each place.

“It’s not a plug-and-play kind of thing; you can’t take a solution that worked well in the US and expect it to have the same kind of [results] in China,” he added. “It doesn’t work like that.”

GizmoCrazed - March 14, 2018 0
The bionic hand closes slowly. Its slender metal digits whirr as they jitter into a loose fist, as though they are wrapping around an...

Be thankful for your gut microbes this Thanksgiving