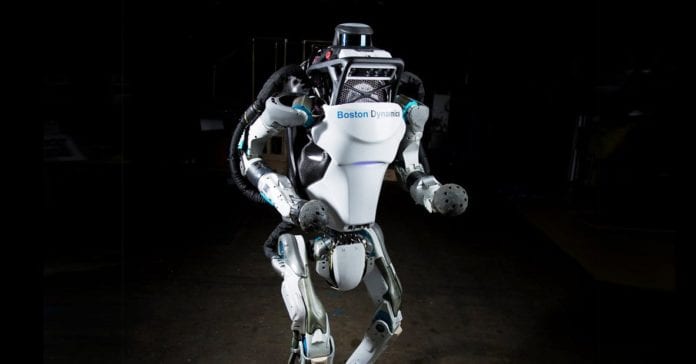 Check out the video below, because it shows a hulking humanoid doing a backflip. And that’s after it leaps from platform to platform, as if such behavior were becoming of a bipedal robot.

To be clear: Humanoids aren’t supposed to be able to do this. It’s extremely difficult to make a bipedal robot that can move effectively, much less kick off a tumbling routine. The beauty of four-legged robots is that they balance easily, both at rest and as they’re moving, but bipeds like Atlas have to balance a bulky upper body on just two legs. Accordingly, you could argue that roboticists can better spend their time on non-human forms that are easier to master.

But there’s a case to be made for Atlas and the other bipeds like Cassie (which walks more like a bird than a human). We live in a world built for humans, so there may be situations where you want to deploy a robot that works like a human. If you have to explore a contaminated nuclear facility, for instance, you’ll want something that can climb stairs and ladders, and turn valves. So a humanoid may be the way to go.

If anything gets there, it’ll be Atlas. Over the years, it’s grown not only more backflippy but lighter and more dextrous and less prone to fall on its face. Even if it does tumble, it can now get back up on its own. So it’s not hard to see a future when Atlas does indeed tread where fleshy humans dare not. Especially now that Boston Dynamics is part of the Japanese megacorporation SoftBank, which may have some cash to spend.

While Atlas doing backflips is full-tilt insane, humanoids still struggle. Manipulation, for one, poses a big obstacle, because good luck replicating the human hand. And battery life is a nightmare, what with all the balancing. But who knows, maybe one day humanoids will flip into our lives, or at the very least at the Olympics.