Uber’s found a way to shave another 25 percent or so off the price of a ride. Uber Express POOL asks you to walk up to a few blocks to your pickup and destination before and after the ride in exchange for the cheapest fare out of all of Uber’s options.

The feature dynamically generates “smart spots” that are easy to drive to and close to the origin or destination of several people seeking an Express POOL. You hail, it tells you where to walk, you go there, join other passengers, take your ride, get dropped somewhere easily accessible near your destination and you get in-app walking directions to your final address. By picking up and dropping off multiple groups of people at once, Uber avoids diverting from a city’s main streets, and passes on some of the savings. 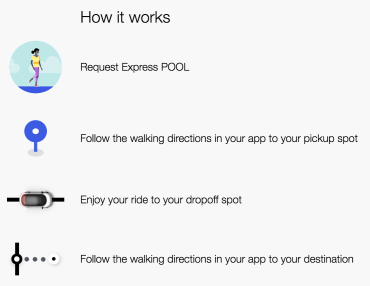 I first spotted the new Uber Express POOL option in San Francisco this week, and then noticed an email from Uber that it was “Introducing our most affordable ride.” The email explained that “Express POOL is a new kind of shared ride that begins and ends at convenient Express spots. Update your app today to start riding for as low as $2.”

After asking about the feature, an Uber spokesperson told me: “We’re always thinking about ways to put more people in fewer cars, while continuing to deliver affordable ride options to consumers. As part of that effort, we’re testing some changes to Express POOL where riders walk to nearby spots that are convenient for everyone.”

They confirmed this is currently a very small pilot program testing in certain neighborhoods of Boston and San Francisco. But if the pilots prove popular, Uber Express POOL could expand to more markets.

Back in July 2015, I wrote that Uber should tell people where to get picked up nearby, and offer small discounts if they’re willing to walk. Soon after the company began testing “Suggested Pickup Points” to make small route optimizations, but without a discount. Later that year Uber tested “Smart Routes” that reduced your fare for setting your pickup along a main artery. That was around the time that Lyft killed off its Express POOL-style Hotspots feature.

Uber quietly started testing a different feature with the same “Express POOL” name in May 2017, but it received no press attention. At the time, you’d schedule your ride up to hours ahead of time, and then get a cheaper fare after a short walk. The recently revamped version Uber just implemented is on-demand like the rest of Uber. There’s still the separate option to schedule an UberX, Black or SUV ahead of time for full price.

The updated feature brings the price of an Uber below the $2.75 that San Francisco charges for a bus ticket. It could be especially helpful to those willing to exchange a little time and effort to save some cash, furthering Uber POOL’s trade-off of time for money. And it could be a free discount for people who live on one-way streets or alleyways who might already call their Uber to pick them up around the corner on the main road.

Uber is on a quest for the perfect ride, and that means polishing every part of the trip. Cutting down the ETA with features like this is particularly advantageous since Uber and the driver don’t usually get paid during the pre-pickup drive. Reducing the price by putting a little work on the passenger could open up Uber to new budget-conscious demographics, and allow it to be a stand-in for public transportation. And as rideshare usage has been shown to decrease public transit usage, bus and subway fares could keep going up while Uber’s fees go down.

GizmoCrazed - June 17, 2018 0
(Credit: yuRomanovich/Shutterstock) By now, we’re all tired of hearing about the virtual currency turned investment craze known as Bitcoin. Created in response to the 2008...