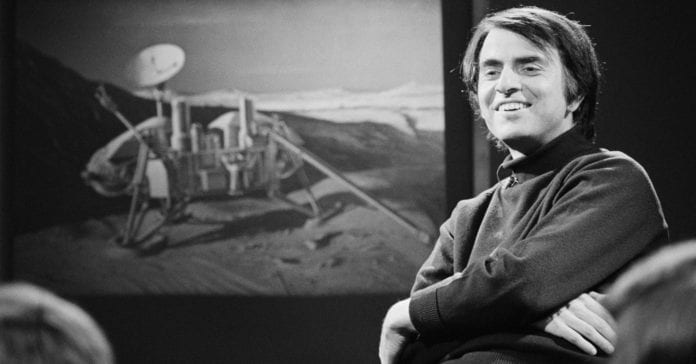 Twenty years ago I called Carl Sagan to ask him why people believed crazy stuff.

Sagan—astronomer, creator of the “golden record” messages to any aliens who might find the Voyager space probes, creator and host of Cosmos, novelist, arguably one of the best-known scientists of the 20th century—would’ve been 83 years old today.

Me, I was a fact-checker on the science desk at Newsweek, which meant I mostly did reporting for other people’s stories. In mid-1996 the magazine spun up a cover on the paranormal, and I was on the team.

Sagan had written a book called The Demon-Haunted World, about science as a way of understanding the universe and freeing people from fears of the supernatural. And he had famously once said of the paranormal that “extraordinary claims require extraordinary evidence.” So I blasted through Demon-Haunted World—and, nervous as any other Cosmos fan would’ve been, I called Sagan at Cornell.

I don’t remember if he was gracious or merely tolerant of my dopey questions. But I have the notes. “When UFOs became a popular subject and I was in early high school or something, it seemed to me great. We were just reaching out into space, and why not a much more advanced civilization reaching out to us?” Sagan said. “It seemed so heady and promising, such an interesting future. But as I learned a little bit more about the properly skeptical attitudes of science and how often we deceive ourselves, I began to look at this with much more skepticism.”

Eventually Sagan would come to think of UFOism as more of a religion than anything else. It was the Cold War, Sagan said, “and people were in their heart of hearts worried that the human species would not pull through. What more comforting belief that aliens would come down and intervene?”

But just because an idea is comforting doesn’t mean anyone should believe it. “Merely because on an issue of this importance we must demand very high standards of evidence, and the proffered evidence is fantastically thin,” Sagan said. “Why would we commit belief when the evidence is so meager?”

Commit belief. That struck me as profound then and it still does—the idea that belief is an action you have to commit, an action so powerful that it requires an infrastructure of truth before you turn the key.

The point, though—the big point—is that humans had the ability to do this. We could figure things out. Nothing was unknowable. “Who is in a position to set limits on what we will know? ‘Unknowable’ is a deep failure of the imagination,” he said. “‘Unknown?’ Who would doubt that there are an enormous number of things that are unknown?”

There was Sagan’s faith, I think, to the extent he had any. Much remains unknown; nothing stands unknowable.

Right now is a tough moment for science. Internal corrective measures—like the push for greater reproducibility and statistical power in fields from psychology to bioscience—have to expose weaknesses before they can rebuild strength. The underrepresentation of women and people of color in research diminishes outcomes and builds power dynamics that allow harassment and abuse. Externally, political nominees to science-heavy policymaking positions have no problem dismissing the scientific consensus that human beings are changing Earth’s climate. Otherwise sensible people refuse to vaccinate their children, exposing entire populations to the spectre of epidemic. Political interest groups use religious goals to influence policy decisions about everything from health care to bathroom signage.

“Science is an enterprise of human beings, so there are all sorts of jealousies and rivalries and unwillingness to admit mistakes,” Sagan said. “But the great advantage is that the culture of science is opposed to these frailties, and the collective enterprise of science undoes them. We give our highest rewards to those who disprove the contentions of our most revered figures.”

Sagan was no Vulcan; he didn’t hope to replace whatever demons he exorcised from the world with spreadsheets. “The other half of science is a well-honed sense of wonder, and that is uplifting and is spiritual,” he said. “But it can’t be that what feels good is what we should believe, because all sorts of deception lies down that road. It has to be what’s true is what we believe, and the only way humans have figured out to find out what’s true is science.”

I talked to Sagan one more time that year, when it seemed that scientists had found evidence of ancient life on Mars. He was, as you’d expect, skeptical. “It’s important to be cautious, because we could be fooled,” he said. Four months later, in December of 1996, he died.

He’d been right to be cautious; the life-on-Mars thing turned out to be wrong.

These truths aren’t self-evident. That’s what makes them difficult. They can be hard to understand, or contravene intuition or closely-held, ancestral beliefs. But Sagan knew that didn’t make them less true, and it makes them even more important.

GizmoCrazed - January 27, 2011 0
Sony has revealed its Next-Gen PlayStation Portable at an event in Tokyo today. It's actually codenamed NGP or "Next Generation Portable." Its features include a...