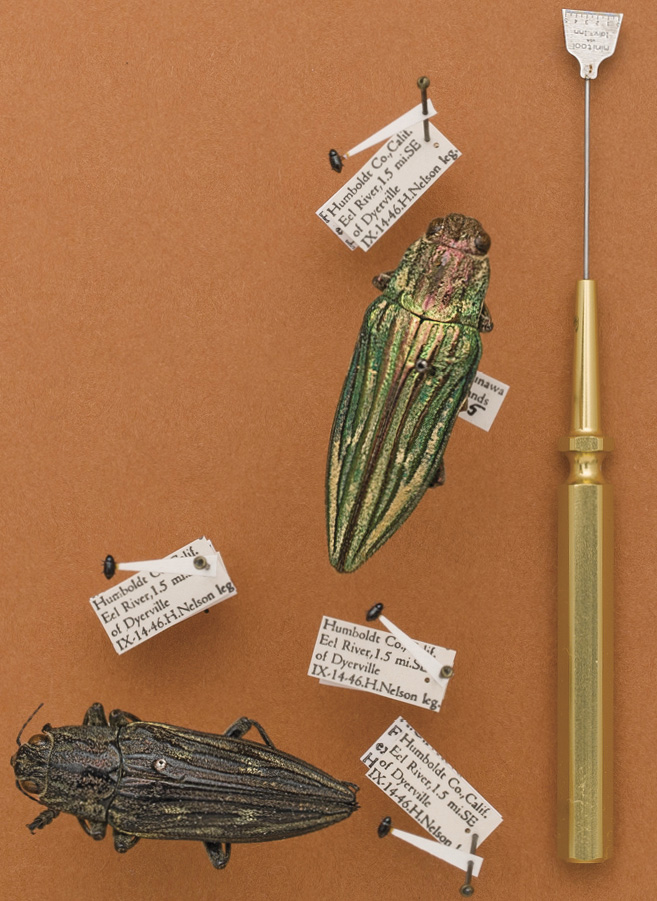 Meet the microscale: essentially, a teeny-tiny ruler that’s a must-have for entomologists — researchers who investigate insects. For larger specimens, such as the metallic, wood-boring Chalcophora japonica (or ubatamamushi, as the Japanese call the beetle, pictured at right and below), the device helps measure morphological features, such as genitalia. For smaller species, such as water-dwelling riffle beetles (Optioservus fastiditus, also pictured), the miniature ruler helps measure the bug itself, which comes in at a whopping 2 millimeters long.

To use the microscale, researchers take the insect — or, if the bug is dissected, they float the body part in a petri dish of alcohol — and put it under a microscope. Then they line up the specimen with the microscale’s tick marks and record the data. To ensure the critters aren’t damaged or mixed up while experts handle them, they’re affixed to pins and tagged with labels that indicate vital information such as species name, who found the bug and where it was collected.

[This article originally appeared in print as “Mini Measure”]

Konsus looks to give companies a way to get specially designed...

GizmoCrazed - June 23, 2018 0
Fredrik Thomassen as a consultant used to have the resources to offload the annoying project tasks — like making PowerPoint presentations — but now...

For Just the Third Time, A Woman Has Won the Physics...