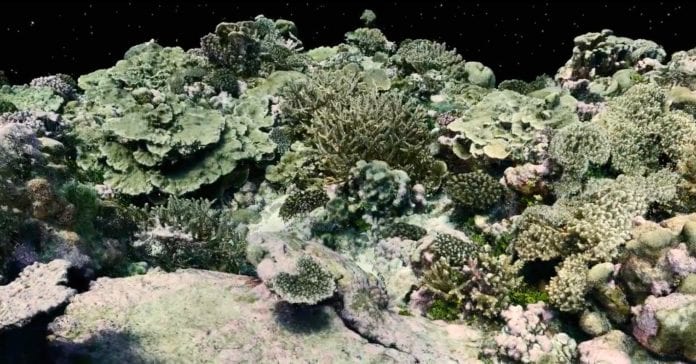 Coral isn’t what you think it is. It isn’t a plant, but an animal. It doesn’t just grow in shallow, tropical waters, but also hundreds of feet deep in the darkness. And it is far tougher than doom-and-gloom stories about coral bleaching would have you believe.

For all that science knows about coral reefs, these complex ecosystems are still maddeningly, well, complex. But a new photographic technique from researchers at the Scripps Institution of Oceanography is exposing coral like never before. By stitching together thousands of photos and running it all through fancy machine vision software, the scientists can create stunning 3-D images of reefs. That’s making coral way easier to study, and could transform how conservationists protect reefs on a planet in peril.

The researchers start by swimming over a coral reef and snapping a photo every second, moving back and forth to grab overlapping images. Back on land, they use computer vision techniques to stitch the photos together by matching up the reef’s features and figure out where the camera was for each photo. From this they also generate an initial estimate of the surface structure.

“Then we can go and generate a finer estimate of the surface that’s composed all of points in 3-D space,” says computer scientist Vid Petrovic. “And what we end up with is around half a billion to 2 billion points for a 10 by 10 or 20 by 20 meter plot of reef.”

With that kind of detail, they can build an intricate model of a reef ecosystem frozen in time. “That means anything that you would have done underwater that doesn’t involve taking a physical sample, any measurements that you would have taken, any observations, you can now do this on the computer screen,” says marine ecologist Clinton Edwards, who helped develop the technique at the Scripps Institution.

So instead of swimming through a reef mapping individual corals, Edwards and other researchers can just consult the 3-D model. That’s allowed them to plot how the various species in a reef are distributed (they’re working on getting AI to do this automatically), which is valuable information because not all corals go about life the same way. The team can even build new, highly detailed 3-D models year after year, essentially taking yearbook pictures of a reef to see how the different kinds of corals grow and interact as an ecosystem.

It’s far from black and white, but you can generally divide corals into two groups, weedy and competitive. “Weedy species are those that grow really fast, make lots of babies, and die relatively fast,” says Edwards. (Corals reproduce either asexually or sexually, in the latter case dumping eggs and sperm into the water column.) “And then you have competitive species, which tend to grow more slowly. Though they reach larger body sizes, they tend to have less babies, but they also tend to be better at competing with their neighbors and regenerating from disturbance.”

Understanding how the two groups are distributed in the reef and how they interact with each other is critical if scientists want to restore broken ecosystems. Because it turns out that corals like each other’s company: Edwards is finding that corals of all kinds tend to do better together. And that doesn’t jibe with current reef restoration strategies.

Humans have done pretty much everything they can to make life miserable for corals, polluting waters and smashing reefs for profit. And when waters get too warm, corals bleach themselves by releasing the symbiotic algae they use to produce energy. To rebuild, conservationists often take individual corals and space them out. But a better strategy might be to actually clump them up so they grow better and, in the end, cover more ground by proliferating naturally.

With better data-driven strategies, corals don’t have to be a climate change pariah. “I think there’s a lot of negative stories that are going around about corals, you know they’re the canaries in the coal mine for climate change,” says Edwards. “But I would actually argue the opposite. I think a canary is an organism that is very, very susceptible to damage and that will be the first to fall. I don’t think that’s what we’re seeing with corals, I think corals are actually incredibly robust.”

After all, you don’t spend hundreds of millions of years on Earth by not surviving climate chaos and extinction events. But humans have made life so tough for corals that we’re under obligation to help them survive. Maybe all it’ll take is a couple thousand group photos.

The Future of Crime: 3 Cyber-Crime Trends To Watch Out For

GizmoCrazed - February 14, 2019 0
In this blog we welcome Guest Writer Sara Carter, Co-Founder of Enlightened-Digital We’ve entered an era of incredible technological innovation. An unfortunate consequence, however, has...

Groupon co-founder Eric Lefkofsky just raised another $200 million for his...

5 Amazing Things Your Brain Does While You Sleep