Those businesses may have little in common, but one shared thread is that U.S. startups in these sectors have all secured large funding rounds led by Russia-based investors.

They’re not alone. Over the past seven years, Russia-based strategic and venture investors have participated in more than 300 funding rounds for U.S.-based startups, according to Crunchbase data. Investments span all stages, major sectors and round sizes, and include both equity and debt financings. (See deal list here.)

The cross-border deal-making isn’t limited to Russian investors backing U.S. startups. Venture firms based in the U.S. have invested in more than 150 funding rounds for Russian startups over the past decade, with a particular focus on e-commerce and consumer internet deals. We’ll look at those trends in the second installment of this two-part series.

In this first installment, we’ll focus on Russia-backed rounds for U.S. startups. Below, we look at the year-over-year trends, highlight some of the biggest deals and most active investors and look at what the data set does not include.

Russia-U.S. investment over the years

A Crunchbase News analysis of deals involving Russian investors backing U.S. startups found that deal counts began picking up in 2011. Activity peaked in 2012, and it held relatively steady over the next three years.

In the chart below, we look at the number of rounds per year for U.S. startups that included a Russia-based investor and the totals raised in those rounds. The investment totals reflect capital from all backers, not just Russia-based ones. Overall, Russian investment activity looks to be lessening in 2016 and 2017, with fewer rounds recorded. 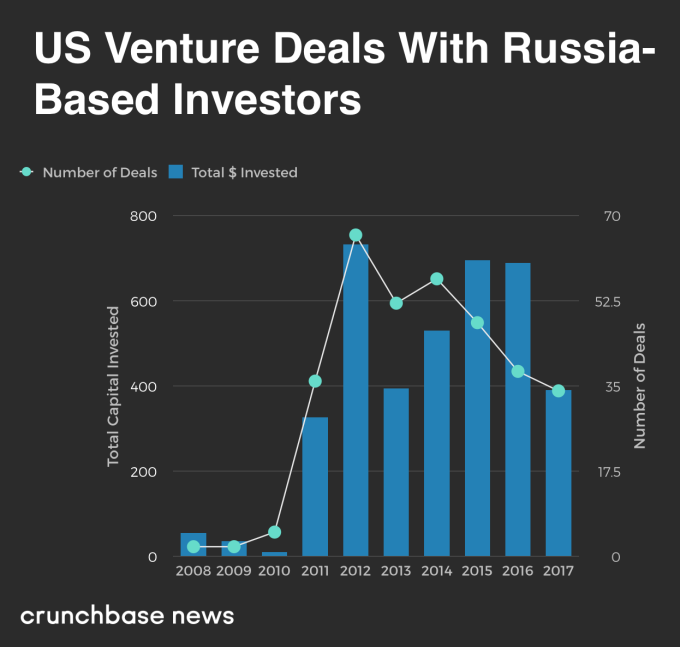 In the chart below, we look at U.S. startup rounds involving a Russia-based lead investor. The number of deals with a Russian lead investor peaked in 2012, dipped over the next three years and has been trending up in the past two years. 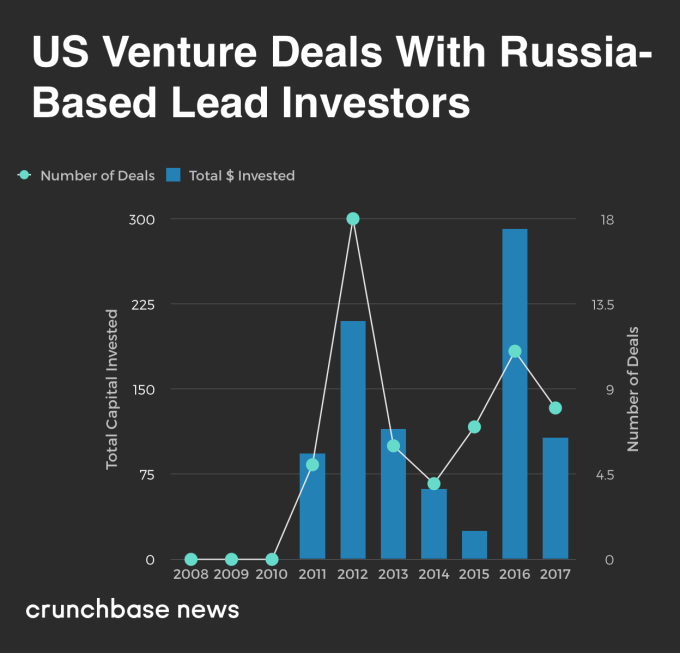 These are the active investors

A number of Russia-based investors have backed multiple U.S. startups, and a few are particularly active.

Among cross-stage investors, Moscow-based Bright Capital looks to be the most active. The firm has participated in 30 seed through growth-stage financing rounds for U.S. companies, with a focus on cleantech, biotech and IT. At the seed stage, Impulse VC has been quite active, participating in about a dozen rounds since 2013. And Skolkovo Foundation, which is supported by the Russian government, has extended grants or seed investments to at least 8 U.S. startups in the past six years.

Banks also have done a number of deals. VTB Capital Investment Management, a subsidiary of Russian government-controlled VTB Bank, has participated in funding rounds for at least four U.S.-based startups. Its most recent funding round was in 2016, for storage technology developer Avalanche Technology.

Sberbank, Russia’s biggest bank, has been active, as well. The bank was involved in two of the largest cross-border deals in the past year: a $100 million debt round for taxi app Gett and a $57 million Series C for online mortgage provider LendingHome.

Meanwhile, on the strategic side, one of the busiest U.S. startup backers is Russian pharmaceutical firm Pharmstandard, which has led or joined funding rounds for at least six (listed here) U.S. life science companies. The Moscow-based company was a lead investor in funding rounds for TransMedics, a transplant device developer; Argos Therapeutics, a now-public cancer immunotherapy developer; and Avelas Biosciences, which is working on technology used in cancer surgery.

To give an idea of the breadth of investments, we look at the largest U.S. funding rounds in recent years that involved a Russia-based lead investor: 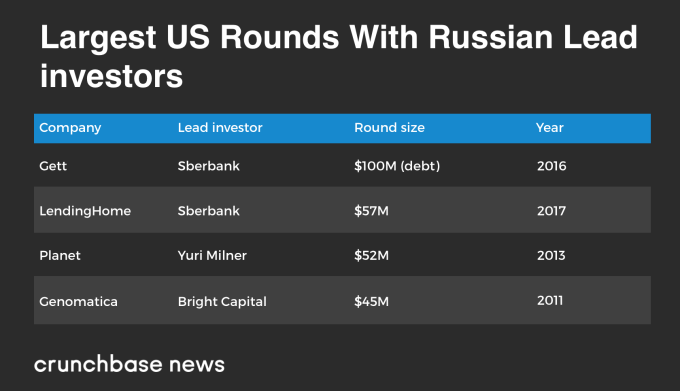 Who’s not included (and why it matters)

It should be noted that the Crunchbase data sets may not reflect the full extent of Russian involvement in the U.S. startup ecosystem. For one, the data is limited to funds and investors based in Russia. That means it leaves out Russian billionaire Yuri Milner’s DST Global, which is headquartered in Hong Kong.

Milner is the most high-profile Russian national actively investing in U.S. tech companies. Although his personal investments are included in the Crunchbase data set, DST’s are not. That’s significant as, since 2009, DST has participated in at least 23 funding rounds for U.S. companies, mostly not as a lead investor. Deals include many of the most prominent internet companies, including Facebook in 2009, Airbnb in 2011, Twitter in 2011 and Slack in 2015. (See the full list here.)

Russian nationals, firms and government-run entities also can participate in startup funding as limited partners, which are generally passive stakeholders in venture funds. DST, for instance, counts banking conglomerate VTB Bank, which is majority-owned by the Russian government, among its limited partner investors. The data set does not include investments by non-Russian firms with Russia-based limited partners.

Where is Russia-U.S. startup investment likely to go from here? It’s noteworthy that the number of U.S. startup financings involving Russian investors is down in 2017 from prior peaks, along with investment totals.

Perhaps there’s greater caution in the startup community around the sourcing of capital. There were some hints of this in a New York Times report examining how the election hacking story is impacting Silicon Valley and its large Russian immigrant population. The paper reported that some Russian venture capitalists have said startups are more wary about taking their funding.

iPhone Could Have Had A Physical Keyboard

Khizar Mashhadi - April 30, 2012 1
Can you imagine your iPhone with a physical keyboard? Well, it could have had one if Apple went with the idea of designing its...

How Plastic Straws Slip Through the Cracks of Waste Management

A Day In The Life of a Satellite [VIDEO]

Blast Your Enemies, Not Your Budget:  6 Gaming Chairs That Will...