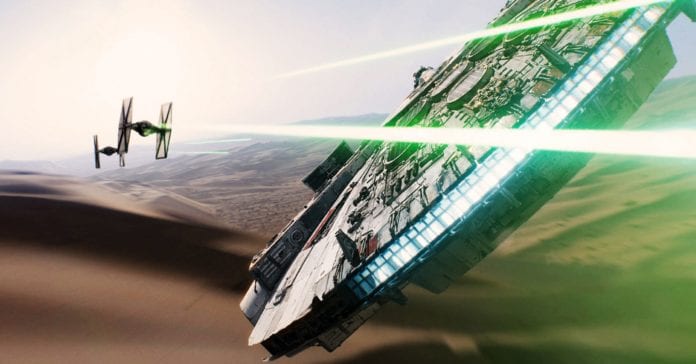 When watching a Star Wars film, you have to suspend your disbelief. Characters use magic brain powers to move things around, lightsabers are a thing, and there are civilizations spread over an entire galaxy. Despite all of these fantastical things, it’s easy to think about this happening in our universe somewhere. This couldn’t be our universe, though, could it?

Excerpted from The Physics of Star Wars: The Science Behind a Galaxy Far, Far Away by Patrick Johnson.

From the beginning of A New Hope, we are told that Star Wars occurred “A long time ago in a galaxy far, far away…” Despite it being a long time ago, the galaxy displays signs of being very mature. It has billions of stars that have already formed. It has hundreds of intelligent species with interstellar transportation capabilities. But when is “a long time ago” in the history of the universe? Could the Star Wars universe be a parallel universe? Or maybe the whole saga predates the big bang altogether. Is that even possible?

THE PHYSICS OF STAR WARS

The best theories that we have indicate that our universe is about 13.7 billion years old. Assuming the Star Wars galaxy is in our universe, we need a few indicators to determine when in our universe’s history Star Wars could occur.

Patrick Johnson, PhD, is currently in his dream job as an assistant teaching professor at Georgetown University, primarily teaching introductory physics. One of his life goals is to bring accessible discussions of science to the world.

Although it took billions of years for life to evolve on Earth, that does not mean the process would always take billions of years. The first eukaryotic cell is thought to have formed from a bacterium entering a prokaryotic cell and living symbiotically rather than being destroyed by its host cell. This was a random fluke that took millions of years to happen. If that event had happened on the first day of prokaryotic life, it could have shaved off a significant chunk of time for evolution.

Altogether, this means that Star Wars needs to be at least 9 billion years after the big bang. This leaves plenty of years before the current time (about 4.7 billion to be precise), so it could still count as “a long time ago,” but it is certainly closer to now than to the big bang. Figuring out where the Star Wars galaxy is in the history of the universe is harder than trying to pinpoint planets in the history of their development. For instance, we see many terrestrial (rocky) planets and a few gas giants. A planet such as Mustafar is very volcanically active and has lava flowing all over its surface; Mustafar is probably in its earliest stages of development. In a similar fashion, Hoth could be an Earth-like planet in the heart of an ice age. It’s more likely that it is just a cold planet far from its star, but Earth did undergo several ice ages.

Planet Earth was once a volcanic mess like Mustafar. Early terrestrial planets with a molten core go through a Mustafar-like phase. These planets need to dissipate heat, especially in early life. Volcanic eruptions aid in that goal and incidentally help create an atmosphere—molecules outgassed via these eruptions are trapped inside a collapsing sphere of dust (that is present from the collisions involved in planet formation). Eventually, the heat and dust clears out and the volcanism settles down.

So a long time ago is feasible, but if Star Wars does take place in our universe, why don’t we find all the fictional elements such as collapsium, tibanna, and baradium? There are two possible explanations. Either they are not atomic in nature or they are larger, as yet undiscovered, elements. As of 2016, 118 elements have been discovered, and none of them are tibanna. If these elements exist, they have to be heavier than the heaviest discovered elements.

It is possible, though, that they are not atomic at all. We think of atoms as the building blocks of everything, but there are a whole host of particles that fall outside this definition. Tibanna could be a type of subatomic particle that is awaiting discovery.

THE PHYSICS OF REAL LIFE

The idea that tibanna and company are actually just heavy elements (i.e., elements with larger atomic numbers) that have yet to be discovered is unlikely. To explain why, we need to discuss radioactive decay.

Some elements have unstable arrangements of subatomic particles, which leads to loss of such particles in a process called radioactive decay (which results in less of the element in its original form existing). Unstable atoms with larger atomic numbers tend to decay more rapidly. Uranium (element 92 on the periodic table) is the largest element not discovered through laboratory synthesis and it has a half-life of sixty-nine to four and a half billion years (a half-life is how long it takes for half of a substance to decay; it can be a range of values depending on how the subatomic particles of the element are arranged). As you go up in number on the periodic table, atoms have significantly shorter half-lives. For instance, one element much larger than uranium has a half-life of about 0.7 milliseconds. So, tibanna would likely have a very small half-life and thus wouldn’t stick around long enough for anyone to mine it (like they do on Cloud City).

Still, the idea isn’t completely impossible. In the 1960s Glenn Seaborg proposed an “island of stability” in larger nuclei, which could give new life to the undiscovered elements theory. Seaborg’s idea relates to a concept in nuclear physics known as magic numbers. Just as electrons have shells that they can occupy while they orbit the nucleus, there are energy shells for the protons and neutrons inside the nucleus. Just as there are a certain number of electrons in a shell, which leads to a less reactive element (because the electrons have “filled” a shell), there are magic numbers of protons or neutrons that cause a nucleus to be extraordinarily stable. Although additional numbers have been proposed, the accepted magic numbers are 2, 8, 20, 28, 50, 82, and 126. This means that the not-yet-discovered element 126 could turn out to be very stable. It would be in the metal range of the periodic table, so it is unlikely to be tibanna gas, but who knows? Maybe it will be baradium.

It’s also possible that Star Wars occurs in a parallel universe. Some interpretations of quantum mechanics indicate that our universe is just one of an infinity of universes. The idea of a multiverse is often explained by considering a block of Swiss cheese. Each universe is one of the holes in the cheese expanding outward. Unlike Swiss cheese, though, the multiverse itself is also expanding so none of the universes will ever collide with each other. In these other universes things could be identical (as far as the laws of physics are concerned) to our universe. Other theories indicate that perhaps in all of these other universes, fundamental constants such as π and the speed of light are actually different numbers. This could lead to wildly different behaviors than what we observe in our universe.

It is also possible that Star Wars took place in a time before the big bang. This may sound like an impossible suggestion, but the big bang just marks a point in history when our current laws of physics didn’t work. It is possible a universe existed before the big bang; it would have been very hot and dense and collapsed upon itself. In this scenario, all of space and time were crumpled up together in an unrecognizable fashion. This is not science fiction—some theories suggest this. The biggest downside to these theories is that they will never be directly measurable unless we can travel to one of these universes or our universe collides with another universe.

Excerpted from The Physics of Star Wars: The Science Behind a Galaxy Far, Far Away by Patrick Johnson. Copyright © 2017 Adams Media, a division of Simon and Schuster. Used by permission of the publisher. All rights reserved.