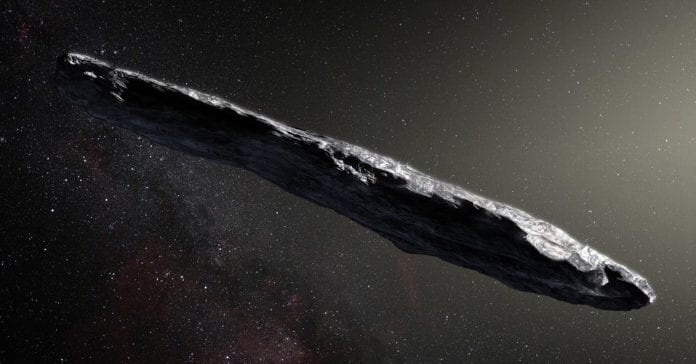 For the first time, humans have detected an interstellar asteroid—a space rock they’re calling ‘Oumuamua, which is a Hawaiian word meaning “scout.” It’s the only object we’ve ever seen that entered the solar system from beyond our little collection of planets. That’s a pretty big deal on its own. But on top of that, this asteroid has a really interesting shape: It’s very long and skinny, with a width to length ratio of about 1 to 10.

Basically, it looks like a cigar—or at least that’s what everyone is saying. The only images we have that show its shape in detail are artistic renderings. Because the asteroid is so relatively small and far away, you can’t easily see it with a visible-light telescope.

But if you can’t see it, how can you describe it? The answer to this (as in many situations in science) is to use indirect observations. The one thing that can be measured is the brightness of the object. Because this rock is also spinning, the light it reflects from the sun changes over time. By looking at the ratio of the brightest to weakest observations, you can get an estimate of largest to smallest size. If you estimate the albedo (a measure of reflectance), you can also estimate the total size. Boom. There you have it—a cigar-shaped asteroid.

If you want to learn the answers to more “how do you know”-type questions about ‘Oumuamua, check out this awesome NASA FAQ. But if you want to calculate some answers for yourself—well, just keep reading.

Could this be a spacecraft?

OK, everyone calm down. This isn’t a page from Rendezvous with Rama—an Arthur C. Clarke novel that depicts an interstellar object that happens to be an alien starship. But what if it was a spaceship? Could its rotation make a type of artificial gravity?

From the data, we know the following two important things about ‘Oumuamua: the length and the rotation rate. OK, we don’t actually know the length, but it’s somewhere between 200 and 400 meters. I’m going to use the bigger size. The rotation rate is known with more precision as it rotates once every 8.1 hours.

How would this make artificial gravity? Let me start with a diagram.

When this “spacecraft” is far away from a star or other massive objects, there is essentially no gravitational force acting on people inside. You can make fake gravity by spinning the spacecraft (as shown above). This spinning motion creates a force (labeled F above) that reproduces the effect of the floor pushing on you to counteract gravity. This force from the floor is what we feel on Earth. If you want a longer explanation, check out my older post about weight and weightlessness.

But why is there a force between the human (or maybe an alien) and the end of the rotating asteroid? It’s because the human is moving in a circle. In order to move in a circular motion, you need a force pointing towards the center of the circle. We often call this a centripetal force which means “center pointing force.” The magnitude of this force depends on the mass of the object, the size of the circle and the rotation rate (ω).

Of course, different humans of different masses will have different forces—just like on Earth. So really it’s just the acceleration that matters for artificial gravity; that’s just the product of ω squared and the radius. If you get an acceleration of 9.8 m/s2, then you have successfully reproduced Earth-like gravity (but not really gravity—just apparent weight).

Now for the acceleration of the end of ‘Oumuamua (it’s sort of fun to say that out loud after you get used to it). This rock has a circular radius of 200 meters (I’m using the biggest value), but what about the angular velocity? Since it takes 8.1 hours for one rotation, ω would be 2 times π divided by 8.1 hours. Of course I really need this time in seconds, so that gives me:

Yes, that’s a pretty slow rotation rate. Just for comparison, it takes the Earth about 24 hours to rotate. Now I can put this along with the radius to calculate the acceleration. This gives a centripetal acceleration of 9.3 x 10-6 m/s2 or an apparent weight that is just 9.48 x 10-7 of that on Earth—in other words, it’s super tiny.

There, I just did the first homework question for you. Now for some more. Note, some of these might require some complex calculations and estimations—that’s what makes them fun.