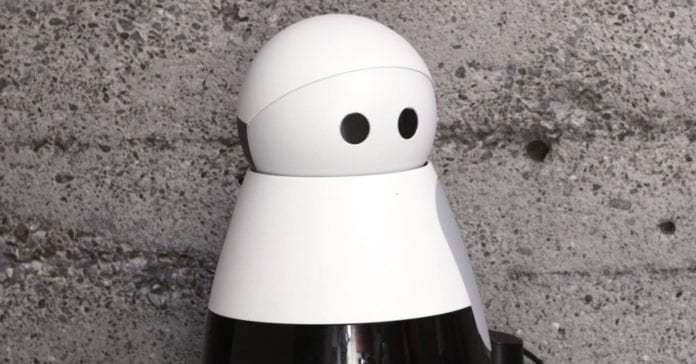 Over the course of thousands of years, dogs have evolved alongside humans to be awesome. Unlike their wild ancestors, they don’t gnaw on us (usually). They stick up for us. They go to the bathroom in designated areas. They’re unrivaled companions. Looking at you disappointingly, cats.

Now, though, they have competition. The companion robots that science fiction has promised us for so long have finally hit the United States, and leading the way is an adorable little machine called Kuri. Made by Mayfield Robotics in Silicon Valley, Kuri—which starts shipping in December—will roll around your house and respond to your voice and recognize faces and take video of your dinner parties, if you’re into that sort of thing.

Not exactly as useful as Rosie from The Jetsons, but hey, it’s early days. And the design evolution of Kuri, from prototype to consumer product, provides a fascinating glimpse into a new era of interaction between humans and increasingly sophisticated machines. The question is: Do humans need or even want this kind of thing? And are we prepared to form a new kind of bond with what is essentially a new kind of being?

Kuri sprang from the minds of roboticists Kaijen Hsiao and Sarah Osentoski, who didn’t actually start out to make a friendly robot. What they originally conceived of was a security robot that would patrol the home. Not to taser intruders, but to keep an eye out. The problem, the pair eventually realized, is that you’re better off detecting someone while they’re still outside. “By the time someone gets in the home, well it’s kind of too late, isn’t it?” Hsiao says.

A robot with fewer responsibilities seemed a more logical starting point. So Hsiao and Osentoski began building a bot for companionship, instead of protection. But this approach introduced a slew of subtle problems, chief among them: How do you get this new technology to work in the home, while also winning the affection of its owners?

First of all, Kuri has to be able to navigate the house without acting like an idiot. To avoid obstacles, it maps the world with lasers, just like a self-driving car. This is the sort of thing that’s really making machines like Kuri possible—sensors are getting cheaper at the same time that they’re getting more powerful. You don’t have to drop $10K on lidar to get your robot to see its world.

Where the design gets subtler is in the look of Kuri. In these early days of personal robotics, it’s important for manufacturers to nonverbally telegraph what their machines are capable of—for safety, in some cases, but mostly to avoid disappointing the user. Do not, for instance, expect Kuri to drag you out of a burning building.

“We try, through her form, to really communicate exactly what Kuri’s capable of,” says Osentoski. “She doesn’t have arms because she’s not going to be moving things around your home.”

Another consideration is how Kuri communicates. We humans tend to anthropomorphize anything that seems even remotely lifelike. Accordingly, Kuri’s designers decided that it shouldn’t speak human. “This is because when you have something that’s talking to you that’s driving around your house you start to expect a lot more,” says Osentoski. “You start to expect the intelligence of a 3-year-old or a 5-year-old.” Kuri just isn’t there yet, mentally or physically, so users need to treat it as such.

At the same time, Mayfield Robotics wants Kuri to win your affection and become part of your family, and a lot of that comes down to the eyes. Watch any Pixar movie and you’ll notice how expressive the eyes are. Humans love eyes. So humans have to love Kuri’s peepers, which are actually mechanical. That limits their emotive potential compared to, say, just slapping a flatscreen on Kuri’s face, but they go a long way in telegraphing emotion for a robot that otherwise communicates with beeps and boops.

So, put it all together and you get an advanced, weirdly cute robot that’s quite remarkable to communicate with. It’s limited at the moment, sure, but as someone who’s interacted with Kuri, I can tell you that it conjures peculiar feelings. Rub its head and it looks up at you lovingly. I’m impressed by its apparent animalness, yet other times frustrated when it doesn’t respond to my commands. I’m fully aware that it’s a machine meant to play with my emotions and expectations, but I don’t really care. In the end, I’m just not fully sure how to interact with it.

Whether humans are even ready for companion robots, though, remains to be seen. Think machines that strike up conversations with the elderly and even cuddle with them. “I don’t believe in companion robots, I’m sorry,” says UC Berkeley roboticist Ken Goldberg. “I don’t think that that’s actually what people want. If I’m lonely, the last thing I want is a robot to come in and somehow be my friend. That’s even more depressing.”

Whether Americans fall in love with it or not, Kuri is a technical milestone. And it will only get smarter from here. This is just the beginning of a new kind of relationship that humanity is beginning to form with robots, so prepare for a lot of awkward moments—and powerful ones, too. And bonus: Kuri will never chew up your slippers or assault your postal carrier.