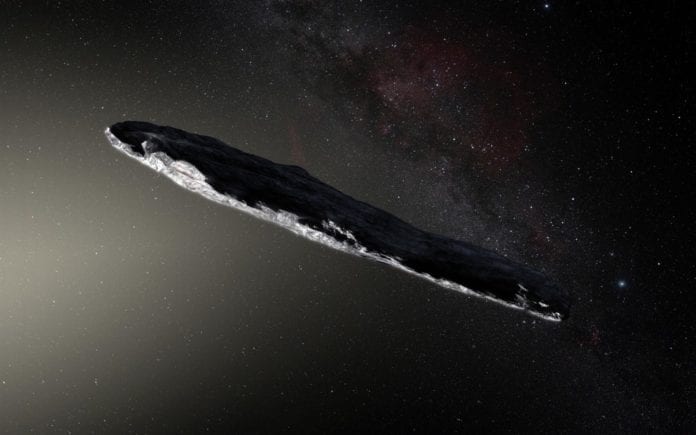 Illustration of `Oumuamua, the first-known interstellar asteroid. Its unusual shape and color offer cryptic clues about the nature of objects from other solar systems. The challenge now is to find more of these messengers from the stars. (Credit: ESO/M. Kornmesser)

That’s the only sensible answer whenever astronomers spot something truly weird in space. That unusual radio blip from the planet Ross 128b? Not aliens. Potential SETI signal SHGb02+14a? Not aliens. The mysterious ‘alien megastructure’ star? Probably not aliens, either. There are so many unexplored natural explanations for unusual phenomena, and so many ways to make errors, that the starting assumption has to be no, no, a thousand times no, it is not aliens.

Then astronomers observed `Oumuamua, the first known interstellar asteroid, as it raced out of the solar system. Its wildly elongated shape resembles that of a rocket stage or–even more enticingly–the interstellar ship from Arthur C. Clarke’s science-fiction novel Rendezvous with Rama. Soon sober-minded reporters (including this one) were exchanging curious messages: Could this ‘asteroid’ actually be an alien artifact? How would we know?

Deep breath. Let’s take this one step at a time. On October 19, the automated Pan-STARRS 1 telescope (which is primarily intended to scan the sky for potentially hazardous, Earth-approaching asteroids) detected an unusual object. It was originally regarded as a possible comet, catalogued as C/2017 U1. By the end of the month, though, astronomers could clearly see that it was something much more remarkable.

First, the ‘comet’ had no fuzz; it was clearly not a comet but rather a fast-moving asteroid. It got a new designation, A/2017 U1 (A for asteroid). Much more intriguing, though, was its orbit. It was moving past the sun on a hyperbolic path, a trajectory indicating that it originated from beyond our solar system. It got another new designation, introducing a naming scheme never used before: 1I/2017 U1 (I for interstellar).

The Pan-STARRS team quickly picked a more apt name for such an important object. It’s now known as `Oumuamua (pronounced ‘oh-oo-moo-ah-moo-a’), a Hawaiian word that translates roughly as ‘messenger from the distant past.’ 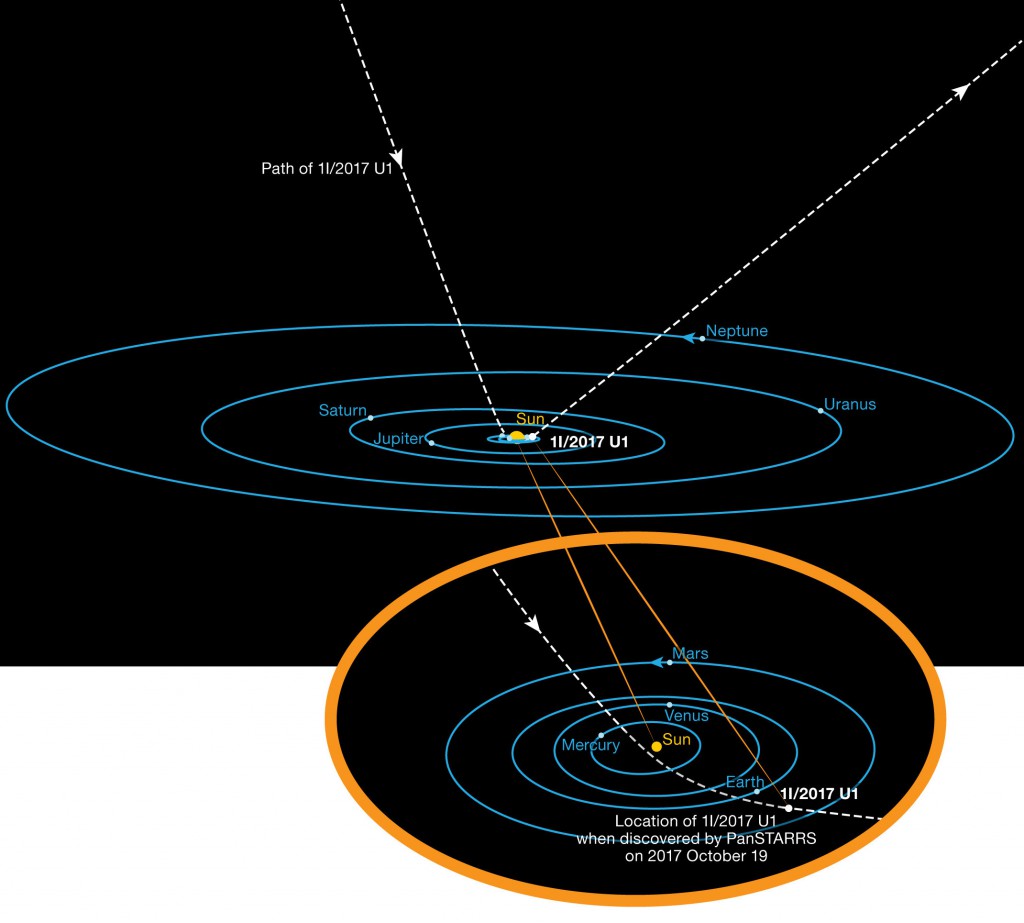 ‘Oumuamua came from the direction of Vega. It’s now racing back out to interstellar space at 26 kilometers per second. (Credit: ESO/K. Meech et al)

Researchers had long theorized that space should be full of comets and asteroids ejected from other solar systems during their early days. Their models showed that planetary formation is a messy business, with many small objects kicked out as big proto-planets form. `Oumuamua is the first proof that they were right. It’s also our first direct look at an intact visitor (as opposed to dust specks) from another solar system.

We didn’t get much of a chance to study it, unfortunately. By the time `Oumuamua was discovered it was already past the sun, on its way back to the stars and off into the darkness. Astronomers at the world’s major observatories rushed to see what they could learn from it. They began amazing, rapid-fire studies. And what they found was…rather odd.

`Oumuamua rotates rapidly, every 7.3 hours. As it spins, its brightness changes drastically, indicating a highly elongated shape. Karen Meech at the University of Hawaii’s Institute for Astronomy concluded that the asteroid is about 400 meters long but only one tenth as wide. It’s shaped like a fat cigar, or maybe more like a fire extinguisher–an apt point of comparison, since the asteroid is also very red, similar to some of the objects in our solar system’s distant Kuiper Belt but also broadly similar to some metallic asteroids.

Sharply varying brightness of `Oumuamua indicates a thin, tubular shape, like a more extreme version of known comets and asteroids…or like some fictional starships. Dots indicate brightness measurements; white dashes show the modeled light curve for a object 10 times as long as it is wide. (Credit: ESO/K. Meech et al)

Those unexpected traits caught the attention of a number of armchair scientists on Twitter, especially after the European Southern Observatory released a pair of evocative (albeit highly speculative) illustrations of `Oumuamua, including the one at the top of this post. Several leading researchers got drawn into the conversation as well.

The thing doesn’t look natural. So here we are again: Could it be artificial? How would we know?

First, there could be the obvious giveaways. It might be emitting radio signals or some other artificially modulated form of radiation. (We didn’t see that.) It might adjust its course in some way. (We didn’t see any deviation from a normal gravitational path.) It might give off a heat signature indicating some kind of engine or internal energy source. (We didn’t see that either, although nobody has looked at `Oumuamua in the far infrared.)

Then the chatter moved on to more elusive speculations. Could this be a dead, abandoned spaceship? Could it perhaps be instrumented but not actively powered? Jason Wright from Penn State summarized some of the conversation in a helpful, nicely skeptical blog post.

There are so many ET ideas to consider that it’s impossible to state with complete certainty that `Oumuamua is not somehow associated with an intelligent alien civilization. Still, Occam’s Razor says it’s unlikely that the very first object we ever see from interstellar space just happens to be a spaceship–a slow, inert, disguised spaceship–built by aliens. Aliens whom we have no evidence actually exist, incidentally.

Fortunately, we can do better than that. Andy Rivkin at Johns Hopkin’s Applied Physics Lab reminded me of a great test case. In 2002, astronomers noticed a small, fast-spinning object in an unusual Earthlike orbit. Spectroscopic observations revealed rough matches with aluminum and paint containing titanium oxide. The object was quickly identified as an Saturn V rocket upper stage, probably from Apollo 12. 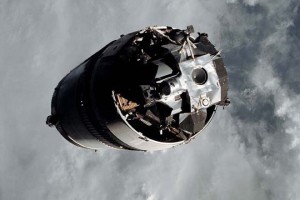 A Saturn V third stage like the one discovered adrift in 2002. If something like this arrives from deep space, we will know. (Credit: NASA)

In other words, artificial objects tend to look artificial. Granted, we knew what to look for when trying to identify an Earth rocket. Granted further, an alien artifact that has been floating through space for millions of years could be heavily altered by radiation and micrometeorites. But still–there’s nothing about `Oumuamua that looks fake. Just weird.

Which brings me to the final, most exciting point. `Oumuamua is not the end of the story; it is just the beginning. The planet-formation models suggest that one to ten interstellar objects pass through our solar system every year! We haven’t seen them before because they tend to be fast and faint. New tools like the Pan-STARRS survey finally caught one that happened to pass especially close to the sun.

Future surveys will be more sensitive, and now scientists will be looking more actively for other visitors to see if they are like `Oumuamua or if they are something else entirely. The Large Synoptic Survey Telescope will be revolutionary in that regard. Right now, `Oumuamua is in a class of one. We don’t now if it is an outlier or if it is somehow typical of the objects that zoom past us from other star systems. Soon, though, we will have a whole catalogue of such objects to study and puzzle over.

We will learn about their compositions, their shapes, their trajectories through the galaxy. Already we can see from its motion that `Oumuamua does not seem to be associated with any of the nearby stars. We will see how many interstellar objects are rocky asteroids and how many are icy comets. We will begin to collect direct evidence of what happened to planets in other star systems, so we can compare their history to our own.

And maybe, must maybe–I know, I’m inching back onto the crazy train here–but if any of those objects show any sign of artificial origin, there’s an excellent chance we’ll know that, too.

Donald Trump is the biggest political spender on Facebook

Scientists Confirm Existance of a New Type Of Chemical Bond –...