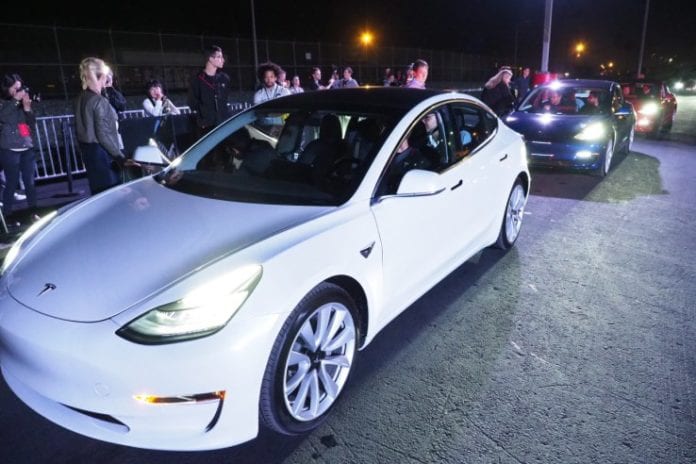 Tesla went into a bit more detail about the production challenges it faces with the Model 3 in its letter to investors on the heels of its earnings report for Q3 today. We already know that Tesla shipped only 222 Model 3 vehicles during the quarter, since it releases sales numbers earlier than it reports earnings. But we now have some color regarding the manufacturing details that have slowed the pace of production

Tesla says that it’s making progress regarding “early bottlenecks,” and reiterated that there are no “fundamental problems” with its supply chain or processes. It noted, however, that parts of its operation for the Model 3 including drive unit, paint shops and part stamping can produce up to 1,000 units per week during “burst builds of short duration,” but that other aspects including assembly of battery packs and final vehicle assembly are showing only “burst build” capacity of 300 units per week. Those aren’t constant figures, also, as indicated by the burst build language.

The carmaker also noted that its “primary production constraint” related to the assembly of its battery modules at Gigafactory 1, in the process that sees individual cells packed into an aluminum case to make up a battery module. Tesla says that this has taken longer to get up to volume than expected due to the complexity of the part design, and the automated assembly process required to put them together.

Tesla says it actually had to bring in-house parts of the process which were previously done by suppliers of its manufacturing systems, and that this also requires a significant redesign to make work. The automaker says it’s “confident” it can grow the rate of this process “substantially in coming weeks” and can even surpass its original specs for rates for this part.

That said, it’s still not entirely confident how long it’ll take for production to ramp, per the letter, noting only that based on its current info it’ll be able to reach a rate of around 5,000 Model 3 cars per week by the end of Q1 next year. It had targeted production of around 1,500 cars in total during Q3, so it’s way behind its own previous internal targets at this stage.

On the earnings call, Tesla CEO Elon Musk opened by acknowledging the Model 3 production issues, and going into detail about how he, personally, is addressing the problems.

“We’re doing this call from the Gigafactory bc that’s where the production constraint is for the Model 3,” Musk said. “I move myself to wherever the biggest problem is in Tesla. I really believe that one should lead from the front lines and that’s why I’m here.”

The CEO noted that the Model 3 has 10,000 unique parts, with multiple processes for each, and that the production pace is only as fast as the “slowest and least lucky” of those. He noted that the “vast majority” of those are going “incredibly well,” but that there are some problem issues. In particular, Musk discussed in detail the battery module assembly issue mentioned above.

Of four zones required for battery module assembly, Musk said that zones one and two are in trouble while zones three and four are going smoothly. Zone two is the really big issue, and one in which a subcontractor dropped the ball, and then Tesla only realized how badly it had been dropped very recently. Addressing the problem required rewriting all the fundamental software for the process from scratch, which Tesla was able to do with a lot of hard work, but redoing the components and electronics required to retool the line will take longer.

Still, once completed, Musk said that its fourth production line for the Model 3 will be as good as the three other existing lines combined thanks to the redesigned battery assembly process.

Musk and CTO JB Straubel also noted that the production process for Model 3 is actually vastly superior and simpler compared to the Model S and X, but clarified that the reason it’s been more difficult thus far is that it’s incredibly automated. The high level of automation means that it’s trickier to address difficulties through means like just assigning additional labor and more shifts to the production line. Tesla also said that the number of work stations required to produce the Model 3 is roughly one-fourth that of the industry standard.

The design on whole is much easier to build,” Straubel said on the call. “But it’s also intensely automated, which lets us realize the margin and cost benefit, but that automation is a lot harder to bring on line.”

Musk also said that there would be “something like a few thousand” Model 3s produced by week around the end of Q4, but cautioned that this is just a guess and not official guidance.