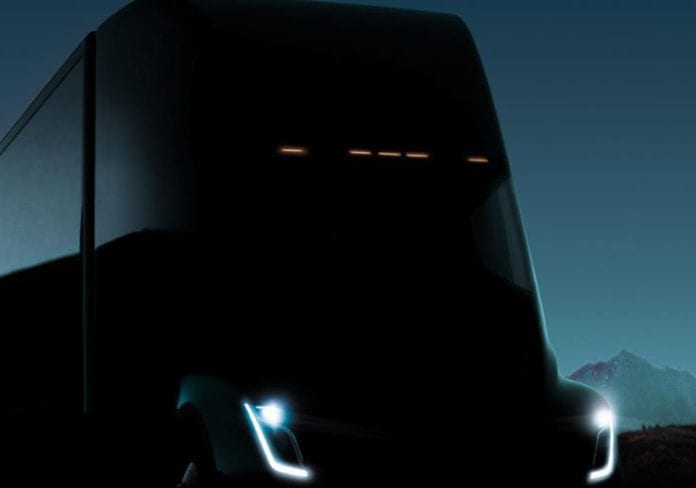 Tesla will unveil its electric semi truck on November 16, the company confirmed today via email invites sent to press. The invites feature a full-size off-center image of the Tesla truck, still mostly clad in shadow, besides those iconic headlights we’ve seen in earlier teaser material.

Originally, Tesla had planned tentatively to unveil this at the end of October, according to Tesla CEO Elon Musk, but the showcase event was pushed to November after Tesla devoted time and resources to setting up solar energy generation and storage facilities in Puerto Rico as part of a hurricane impact relief campaign.

Meanwhile, Daimler unveiled its own heavy-duty electric transport truck, with 220 miles of estimated range per charge. Tesla’s truck is said to have between 200 and 300 miles of range per charge, according to a previous report, which would require a significant battery capacity to achieve given the towing capacity of the truck category that Tesla is targeting.

Elon Musk has said that Tesla worked closely with logistics providers on the design of the truck, and that their input has been useful in creating a vehicle that will resonate with commercial operators. Its range will likely mean that it’s suited only for short or medium haul journeys, but it could manage city-to-city or city-to-port routes in some areas for hauling bigger loads at a cost advantage compared to using fuel.

The other potential feature Tesla could offer in its big rig is some kind of autonomous driving capability, as it’s been reported that the automaker held meetings with various DMVs in the U.S. around testing the vehicle on roads. We won’t have to wait long to learn more, of course, as the event is coming up next week in Hawthorne, just outside of LA.