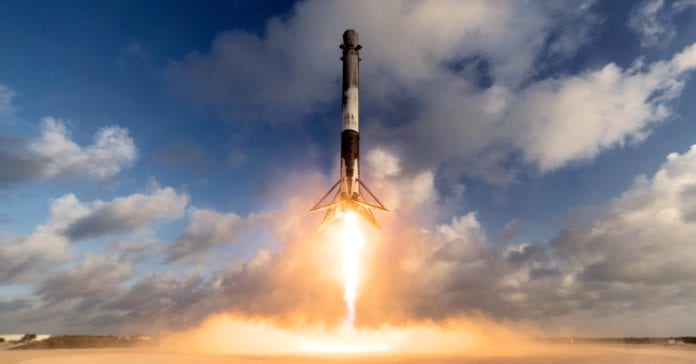 Update: SpaceX’s Falcon 9 launch was delayed on Thursday until at least Friday evening, with a launch window opening at 8 pm Eastern. Later, SpaceX delayed the launch yet again to an unspecified date, saying in a statement, “We have decided to stand down and take a closer look at data from recent fairing testing for another customer.”

Usually, when a SpaceX thing unexpectedly goes boom, it grounds the company for months and raises questions about safety and reliability. On Sunday, November 5, SpaceX was preparing for an experimental engine test at its facility in McGregor, Texas when a propellant leak ignited, damaging the test stand.

But despite the explosion, Elon Musk’s spaceflight company will push on with its planned launches uninterrupted. The first mission following the failure will fire off on Thursday night from Kennedy Space Center during a two-hour window opening at 8pm Eastern time—and it’s a notable one. The payload, codenamed Zuma, is yet another covert mission for the US government. And this one is even more hush-hush than before, squeezed into the end of SpaceX’s 2017 launch slate with just a month’s public notice.

Veteran aerospace manufacturer Northrop Grumman built the payload, according to a document obtained by WIRED and later confirmed by the company. The company says it built Zuma for the US government, and it’s also providing an adapter to mate Zuma with SpaceX’s Falcon 9 rocket. But that’s where information starts tapering off. A typical SpaceX mission on the manifest would tell you exactly what the payload is and where it’s being delivered. Northrop Grumman simply says Zuma is bound for low-Earth orbit—or a destination between 100 and 1,200 miles above Earth’s surface.

At NASA’s Kennedy Space Center, mission payloads have three levels of security restrictions for pre-launch processing. Zuma is categorized at the highest level, sharing the designation with two other SpaceX payloads this year: the secretive X-37B spaceplane, launched for the Air Force, and a clandestine surveillance satellite for the National Reconnaissance Office. Northrop Grumman acknowledges that its payload—the documents obtained by WIRED mention that it is a satellite—was built for the government, but it did not specify which branch.

Weirdly, Northrop Grumman will be a direct competitor to SpaceX come July, when the company will complete the acquisition of spaceflight company Orbital ATK, which also delivers cargo to the International Space Station for NASA. Regardless, Northrop praises SpaceX’s prices and reliability; Zuma’s launch date was crucial to the success of the payload, and while the public acknowledgement only came in October, Northrop established a rigid November launch slot with SpaceX earlier this year. “This event represents a cost-effective approach to space access for government missions,” says Lon Rains, communications director for Northrop Grumman. “As a company, Northrop Grumman realizes that this is a monumental responsibility and has taken great care to ensure the most affordable and lowest risk scenario for Zuma.” Such praise from an old-school space systems company (and especially a future competitor) is pretty rare, especially for SpaceX.

Increasingly, SpaceX’s future is tied up in the success of federal contracts, regardless of their provenance. Having the ability to launch space missions is so important to the Air Force that it pays companies like SpaceX to develop new launch systems—anything to keep them from relying on the Russian-built RD-180 engine, the main power behind orbital military missions over the last few years.

Right now, the Air Force is sharing costs with SpaceX as it develops its Raptor engine, which was test-fired last year days before Elon Musk gave a talk at the International Astronautical Congress in Mexico where he presented how the Raptor would enable deep space missions to Mars. The original agreement allocated nearly $33.6 million to SpaceX under the conditions that they will provide double that amount for the Raptor development. Following an update on SpaceX’s plans for interplanetary travel at this year’s IAC in Australia, the Air Force awarded the company an additional $40.7 million.

SpaceX’s model of accepting development cash and completing contracts that lead to bigger ones has been a lucrative business model. Before it was a serious launch provider, the company was awarded almost $400 million to develop the Falcon 9 rocket and Dragon cargo capsule. After SpaceX spent nearly $450 million of its own cash to complete the vehicles and reach developmental milestones, they were awarded a $1.6 billion contract by NASA to deliver cargo to the ISS.

With so much riding on the success of those partnerships, last week’s explosion—the first after 16 non-problematic launches—was a justified scare. The engine failure originally reported by the Washington Post was actually a failure of the test stand, and sources familiar with the incident tell WIRED the explosion occurred before SpaceX actually fired the engine. A report published in NASASpaceflight points to a leak of liquid oxygen which was then ignited by a still-unknown source.

Housed on that test stand was an experimental Merlin engine, similar to the ones used to power the current fleet of Falcon 9 rockets. But this one in particular is a qualification unit for the upcoming Block 5 Falcon 9—a meaty upgrade that will increase the rocket’s thrust and cut down on refurbishment time between launches. SpaceX hopes to use the Block 5 Falcon 9 achieve its next big goal: flight to reflight of a single booster in 24 hours.

While that explosion doesn’t affect any federal contracts directly, it does call operations at the McGregor testing facility into question. When SpaceX wraps up its investigation, it may need to make upgrades to the test stands to avoid future problems—especially in the months leading up to human spaceflight returning to American soil. The Block 5 Falcon 9 rockets and accompanying Merlin engines will be used to lift humans safely to low-Earth orbit. Any incidents involving that hardware will raise serious questions.

Any further incidents, given SpaceX’s twin disasters in 2015 and 2016, will undoubtedly cause delays when the FAA and NASA require full investigations. Questions about SpaceX’s fueling procedures have been raised before, especially after the 2016 explosion that took out an entire rocket, an expensive customer satellite, and a launch pad. That, too, happened before a test fire and involved the ignition of leaked propellant.

This final version of the Falcon 9, the Block 5, will make its debut in late 2018 in time to fly astronauts to the ISS. SpaceX is still investigating the McGregor explosion to find its “root cause” and says it will stick to the upcoming launch schedule, including a resupply mission to the ISS, an Iridium satellite delivery, and—in the final days of 2017—the much-anticipated test flight of the Falcon Heavy, the linchpin in SpaceX’s crewed and interplanetary ambitions.

Elon Musk has casually floated the idea of a spectacular explosion during the Falcon Heavy test flight, and acknowledges the complexities of test-firing 27 of the Heavy’s Merlin engines. As the company gets closer to actually sending humans on the top of that rocket, you can bet that attitude will change.