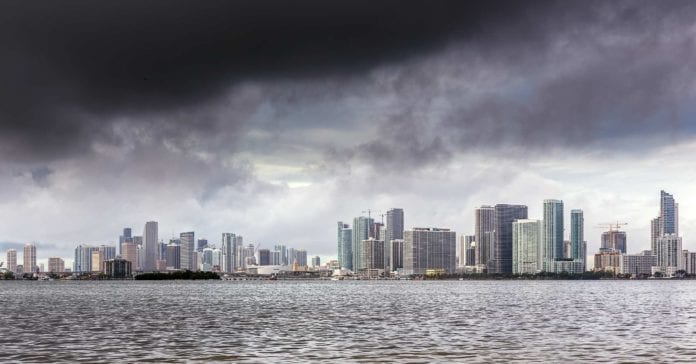 The modern human obsession with beachfront property is nothing new. For tens of thousands of years, our kind has been bonded to the coast and its bounty of food. Inland is alright, too, but nothing matches the productivity of the sea.

The problem with coastal living is that while the food supply is relatively stable, sea levels are not. They’ve always risen and fallen as the climate changes over the millennia—and thanks to the hyper-productivity of the Industrial Age, they’re in the middle of a pretty significant uptick. In the coming decades, rising sea levels could jeopardize untold billions of dollars in real estate and infrastructure along the world’s coasts and displace millions of people.

While climate change imperils humanity’s future, it also imperils its past. A new study out in PLOS One quantifies that in alarming detail: Just in the southeastern United States, a sea level rise of one meter would inundate thousands of archaeological sites, from Native American settlements to early European colonies.

The researchers began their archaeological accounting with what is, quite frankly, a mess of data. States are federally mandated to keep records of archaeological sites, but they don’t all go about it in the same way. They might collect different kinds of information, ranging from the sorts of artifacts found to the era of settlement.

So the researchers worked with an ongoing project called the Digital Index of North American Archaeology, an umbrella database that compiles this mess of data into something more manageable. Then it was a matter of marrying location data for sites in nine southeastern states, including Florida, Georgia, and the Carolinas, with elevation data—plotting which sites will be in trouble. (None of this location data, by the way, is particularly exact. Security purposes.)

The results aren’t encouraging. With a sea level rise of one meter—which could happen before the end of this century—the states would lose over 13,000 total sites, 4,000 in Florida alone. With a rise of 5 meters, the sites lost in the region would top 32,000.

It’s all a bit demoralizing, I know. But this research is an attempt to bring some order to what is quickly becoming chaos. “What we are hoping to get started is a conversation in American archaeology, and world archaeology,” says co-author Josh Wells of Indiana University South Bend. “What are the effects of climate change on the record as we understand it, and to what extent do we need to triage and focus our efforts on recovering what we can before it’s gone?”

It’s the sheer scale here that’s so daunting. How do you save 13,000 individual sites? Well, you don’t. Archaeologists have to face the reality that if sea levels rise, they’re going to have to pick a select few sites to concentrate on, cataloging them as best they can—perhaps with slick new digital techniques—and doing whatever possible to ensure their survival.

You might build a sea wall around a particularly important site, for instance, but that could endanger other sites. “When you build these barriers you’re typically taking soil,” says Anderson. “You’re taking materials from locations that themselves contain archaeological and historical resources.”

Theoretically, you could move structures as well. The Egyptians did this with the Abu Simbel temples when a new dam threatened to submerge them in the 1960s. But what do you choose to save? Who chooses what to save? (Irony among ironies: Washington, DC and its many cultural sites may eventually be at risk, the study notes. The Lincoln Memorial sits at 10 meters above sea level, which seems like a lot until you factor in the threat of floods. So the government may need to move monuments one day, long after the man who shunned the Paris Agreement has left office.)

There’s also the human cost. Archaeological sites will be submerged, but so too will modern communities. This is also already happening. In 2016, the federal government announced it would move a band of the Biloxi-Chitimacha-Choctaw Native American tribe from coastal Louisiana, where rising waters were threatening to sweep the community away. Climate change forced them not just from their homes, but historically and culturally significant locations.

Relocations, though, can further complicate matters. As sea levels rise, more and more people will have to move inland. And development there could imperil the archaeological sites that would otherwise survive sea level rise.

Yeah, it’s scary stuff. But this research is a big step toward making sea level rise not only more comprehensible, but manageable. After all, we’ve got a future to safeguard and a past to preserve.

Einstein, Neutrinos, And The Relativity Of Wrong

GizmoCrazed - September 29, 2011 1
Last Friday, scientists at CERN - the European Organization for Nuclear Research - shocked the scientific community by publishing evidence of an anomaly they...

This Could Be the First 1,000 mph Land Vehicle

A New Quantum Paradox Flags Errors in Our View of Reality

10 Weird Gadgets That Never Got Off The Ground