For driverless car startups, raising capital seems to happen on autopilot. Investors and acquirers have put billions into the space over the past couple of years in the race for early mover advantage. They’ve shown no desire to hit the brakes lately either, as indicated by a spate of recent deals, including last week’s $450 million sale of autonomous driving software developer NuTonomy to Delphi Automotive.

In an effort to put the deal-making in perspective, Crunchbase News has aggregated some of the metrics for startup investment in the space. Our chief finding — that autonomous driving is a red-hot sector — is already obvious.

But in addition, we found:

Valuations for self-driving tech companies are going up along with round sizes, Chris Stallman, partner at transportation-focused venture firm Fontinalis Partners, tells Crunchbase News. Part of the impetus comes from automakers and suppliers, many of whom are aggressively expanding their autonomous vehicle capabilities and are making early acquisition offers to promising companies.

“They are attempting to shore up their supply chains and are fearful of becoming too tied to a technology company that may ultimately be acquired by a competitor,” Stallman says. Meanwhile, traditional VCs and corporate venture investors are also actively extending term sheets to talented startup teams.

In the following sections, we look at some key metrics for the driverless car startup space: year-over-year comparisons, largest recent rounds and biggest M&A deals.

It seemed like 2016 was a remarkably bullish period for autonomous driving investments. But at first glance, 2017 makes last year look kind of slow.

So far this year, investors have poured about $1.4 billion into companies in the space, more than double 2016 levels ($630 million), according to Crunchbase data. Deal count is relatively flat, with about 43 rounds in the first 10 months of this year compared to 48 in all of 2016. We compiled a list of noteworthy deals for this year here and for 2016 here.

As always, metrics are imperfect. For one, some companies, such as Lyft and Uber, aren’t known as self-driving car startups, but do have partnerships, internal R&D and strategic plans tied to the technology. For this exercise, we focused mostly on companies that principally characterize themselves as autonomous vehicle technology companies, leaving out ride-sharing and new auto brands. Also worth noting is that the biggest deal for this year, Ford’s $1 billion investment into Argo AI, has characteristics of both a venture deal and an acquisition.

There also is some blurring of categories, including companies that operate in sectors like automotive safety or mobility as well as autonomous vehicles. (When looking at more mature companies in the space, another consideration is that many, such as computer vision juggernaut Mobileye, started out before driverless vehicles existed as a discrete category.)

Not only are autonomous vehicle startups raising big rounds, they’re doing so at fairly early stages of development.

In the chart below, we look at the 10 largest rounds for self-driving tech companies this year. Half of the top 10 are less than three years old. 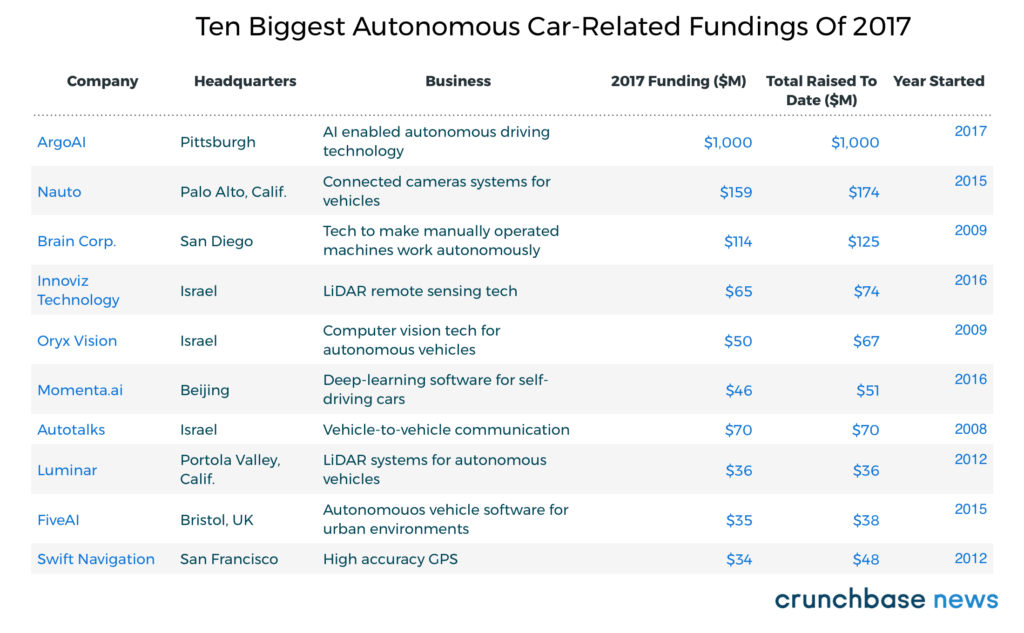 Acquirers also have continued to snap up autonomous vehicle companies this year. By far the largest deal related to the space — Intel’s purchase of Mobileye — involved a mature, publicly traded company. But buyers were also picking up early-stage startups, including October’s sale of NuTonomy to Delphi Automotive.

In the chart below, we look at the largest M&A transactions in recent years involving self-driving technology startups:

Parking all that capital

“Although valuations have crept up, I don’t think we have reached an oversaturation in autonomous vehicle companies,” Stallman says. One reason automakers are motivated to move fast is that much of the early innovation in autonomous vehicles came in the years following the 2008 financial crisis, when U.S. car companies were struggling for survival and R&D suffered. Now they’re having to catch up.

Yet while they’re paying handsomely for self-driving talent, investors and acquirers are cognizant of the risks Stallman says. Deploying autonomous technologies on the road safely requires overcoming a tremendous number of challenges and will require better perception of the vehicle’s surroundings, better maps, better processing capabilities and better decision making.

Like other segments of venture capital, there will be winners and losers. In this space, however, the race to the finish line is happening at an unusually rapid pace.