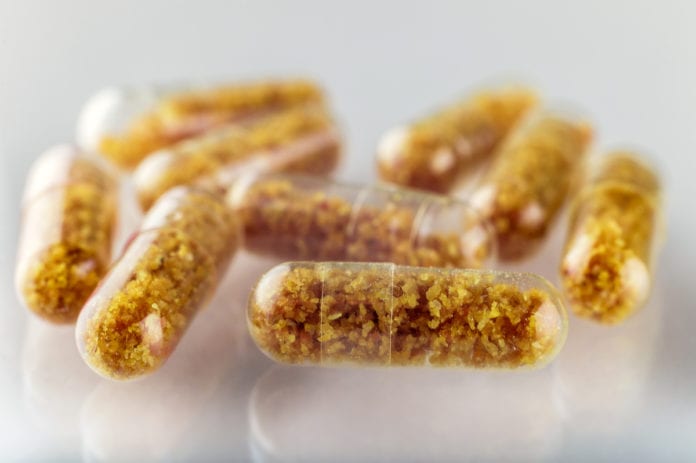 What fecal transplant pills could look like in the future. (Credit: Marc Bruxelle/Shutterstock)

That’s the conclusion of a recent study assessing the effectiveness of fecal microbiota transplants (FMT) delivered in pill form, versus given by colonoscopy. It sounds a bit off-putting, but validating the safety and efficacy of fecal capsules could give patients with gut diseases a cheaper and less invasive option for treatment.

The study, published Tuesday in the Journal of the American Medical Association, took place in patients suffering from recurring Clostridium difficile infections, a bacterial infection that often takes hold in the gut after courses of antibiotics. Those drugs can wipe out normal gut bacteria, allowing harmful species like C. difficile to flourish. Symptoms include inflammation of the colon, cramping and severe ongoing diarrhea, and FMT aims to undo the damage by restoring the proper species of bacteria to the digestive system.

A fecal transplant is pretty much what it sounds like. Recipients take poop donated from someone else — containing a dose of healthy gut bacteria — and implant it into their own digestive systems. The goal is to reboot or replenish the colonies of microorganisms essential to digestive processes, kicking out harmful ones like C. difficile.

The usefulness of fecal transplants in treating C. difficile infections has been demonstrated in multiple previous studies, but most of those involved the use of colonoscopies or enemas to get the bacteria where they needed to go. That works, but it also involves swimming upstream, so to speak. Doses of bacteria inside a pill make their way to our digestive systems in a much more natural fashion.

There’s been evidence that pills would accomplish the same thing as a colonoscopy, but reason for caution as well. Preliminary studies from OpenBiome, a non-profit organization that maintains a stool bank and which hopes to market fecal transplant pills, indicated that the pills worked. On the other hand, a study from Massachusetts-based Seres Therapeutics based on a version of the pill containing just bacterial spores failed to show any real benefit.

Here, researchers from the University of Alberta and the University of Calgary again tested patients suffering from recurrent C difficile infections. Of 116 subject, roughly half got FMT via colonoscopy and the rest took pills containing the same fecal mixture. After 12 weeks of observation, about 96 percent of patients in both groups had recovered from their infections. The pills didn’t affect the quality of the treatment at all, it seems. More patients receiving pills, however, rated their treatment as “not at all unpleasant,” a result that agrees with a 2012 study finding that most patients would choose a pill over other methods of FMT.

The only downside, as one patient noted, was the sheer number of pills. Participants had to down 40 within an hour, or one dose every minute and a half. Even if they tasted like Flintstone multivitamins, that’s a tall order. In reality, the pills actually don’t have any taste or flavor, which is probably best, all things considered. In addition, other studies of FMT pills have used fewer doses, so future treatments may not necessarily require quite so many pills.

As fecal transplants continue to show promise for treating harmful gut diseases, the concept of a poop-filled pill may begin to seem less icky and more routine. After all, we take probiotics to keep our guts happy and healthy. Why not go directly to the source?

GizmoCrazed - June 24, 2019 0
What do early-stage startups Forethought, Pi and Recordgram have in common with successful tech companies like Dropbox, Mint and TripIt? They all competed in...

Will Virtual Reality Bring Us Together?

Inspired by spiders and wasps, these tiny drones pull 40x their...