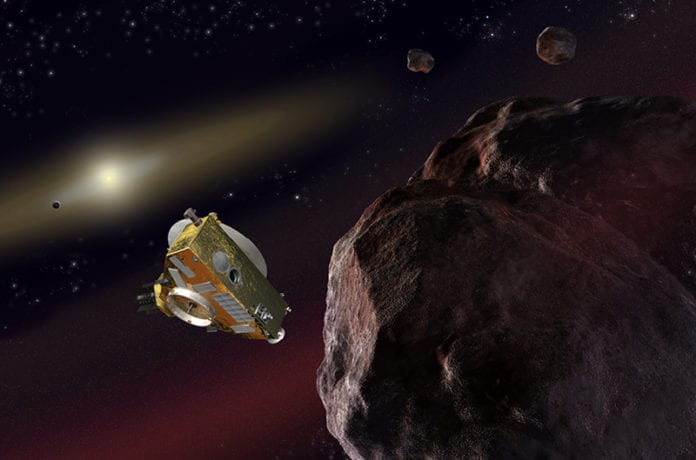 “It’s always been hard in theory to build from pebble-sized chunks that will naturally form out of the solar nebula, up to things that are tens of miles or hundreds of miles across,” says New Horizons scientist John Spencer at the Southwest Research Institute. In computer models, these objects tend to destroy each other when they collide.

Astronomers are starting to suspect that the pebbles mixed with gas in the early solar system and then clumped together, growing from pebbles all the way up to objects the size of MU69. But to verify that, they need to study the distant and tiny objects more closely, which is nearly impossible from Earth, as the New Horizons team showed when they tried to learn their target’s size and shape.

“We’re very anxious to see what these things look like up close,” says Spencer.

Easier said than done, of course. Even finding MU69 in the first place took a herculean effort. Marc Buie of the Southwest Research Institute spent nearly a decade searching for a second destination for New Horizons after Pluto, starting two years before the spacecraft launched in 2006. NASA built the probe to be light and fast. It covered 30 times the Earth-sun distance — 30 astronomical units — to reach Pluto in just about nine years. That meant minimal fuel, too, so Buie knew any detours after Pluto had to be very close to the path the spacecraft was already traveling.

To make the effort even tougher, the search area happened to overlap with the star-rich Milky Way, a region of the night sky bursting with tiny pinpoints of light. Finally, the year before the Pluto flyby, Buie’s team struck gold. MU69 popped up with just enough time to verify its position and aim New Horizons in its direction.

“To be able to just go and find a chunk of rock floating out in space 43 astronomical units away, and know that in just a few years’ time you’re going to be flying by it — that’s why I got into space exploration,” Buie says.

Once he’d found MU69, it was up to Buie and others to calculate its orbit and predict where its shadow would fall on Earth during the occultation last summer, resulting in those windswept telescopes on Patagonia’s beaches. Luckily, the astronomers saw no potential hazards near the world.

“Everything about this is do-it-yourself spaceflight,” says Stern. “Nobody’s planning to do anything like this again. I’m sure someday, somebody will go farther, but this is probably gonna hold the record for decades — a century — who knows?”

[This article originally appeared in print as “The Next Horizon]

Why Moisturizers With SPF Don’t Work As Well As Sunscreen

GizmoCrazed - April 3, 2019 0
When people put sunscreen on their faces, they often miss the eyelids, an area prone to skin cancer. People using SPF moisturizers are even...

Watch out Google Duplex: Microsoft just demoed its own AI having...

Tech devices that make for great last-minute gifts for anyone