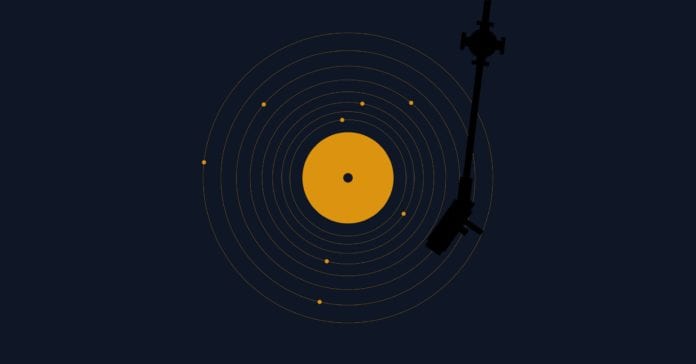 Tromsø, Norway is usually a destination for northern lights lovers—tourists and scientists alike. But on October 16, the small city north of the Arctic Circle took on a new cosmic role. A radio telescope in the city, a hotspot for aurora investigators, became the origin point of a transmission aimed at the exoplanet GJ 273b, a potentially habitable world just over 12 light years from Earth. Or really, at any GJ 273b inhabitants who might be listening.

The meat of the transmission was carefully crafted by METI International—the alien hunters so serious about Messaging Extraterrestrial Intelligence that they splintered off from the SETI Institute to get more ambitious. It’s the first information-rich message they’ve sent since forming in 2015. And with this bit of code, constructed in partnership with the Spanish Sónar music festival and the Institute of Space Studies of Cataloniar, they want to teach aliens about music—one radio wave pulse at a time.

Sending a message to ET isn’t easy. On the terrestrial level, the team first had to get access to a radio telescope, which can be tricky: The instruments are in high demand, and time slots tend to go to projects that are likely to produce, well, results. So METI sent someone who had experience asking for time and resources no one really wanted to give them: their exoplanet hunter Ignasi Ribas. “Twenty years ago, when we didn’t know if exoplanets were out there, exoplanet hunters were in the same position we are,” says METI president Douglas Vakoch. Fortunately, the director of Tromsø’s EISCAT 930 MHz transmitter was intrigued, and gave the group access to the facility for a three-day transmission.

Extraterrestially, the researchers had to choose one target from nearly limitless potential worlds. METI has two main criteria: the planet has to be (relatively) close to Earth, and it has to be a place that aliens could plausibly evolve and thrive. Which usually means it has to be in the Goldilocks Zone—not so cold that any water would be locked away in an glacier, and not too hot that it would just evaporate. “You want a star that has some staying power,” says Vakoch. “You need time for life to cook up.” Smaller stars have longer lives, and GJ 273b orbits a red dwarf named Luyten’s Star.

But perhaps harder than all that was deciding what they wanted to say once they’d phoned ET. The METI team wanted to tackle altruism, but the radio telescope METI partnered with was interested in sending a message that would convey Earth culture. So METI joined forces with the Spanish Sónar music festival to create a music-based message, and it was up to METI to make sure any extraterrestrials on the receiving end understood what they were hearing—if they can hear, that is.

Music actually turns out to be a decent universal language. Aliens don’t have to see in order to perceive it. And even if extraterrestrials can’t appreciate a good tune, Vakoch is hopeful that they might enjoy the mathematical relationships between the notes. They encoded their entire message in a binary system of two alternating frequencies (an industry standard among alien hunters), pulsing the frequencies 125 times per second. Interpreting those beeps and boops (which act a lot like ones and zeros for computers) is ultimately up to the aliens. “It’s like creating a puzzle,” says Mike Matessa, a cognitive scientist and friend of Vakoch’s who helped develop METI’s message. “We tried to make it as easy as possible, but it’s really challenging when you can’t refer to anything in your culture, only science.”

One of the messages’ novel features is a clock. “We introduce notions of time like a second by having a pulse and saying, ‘This is one,” says Vakoch. “Then we pulse for two seconds and say, ‘This is two, and the pulses vary because the two is twice as long as the one.'” Then they expanded on those basics just as they did with the mathematical concepts underpinning musical theory. As the aliens work their way through the message, converting pulses to a numbering system, doing basic arithmetic, the clock will tell them how many seconds have passed, hopefully confirming that that initial pulse—the second—was a measurement of time. Which will also help them figure out that Earthlings will be listening for a response from them in 25 years. It’s everything human scientists would want to receive in an alien transmission. “It’s designed for the SETI scientists of other worlds,” Vakoch says.

Their next message, scheduled for April 2018, will be more musically complex. Not only will they send musical samples from Sónar artist community, they’ll actually be able to use the EISCAT 930 MHz transmitter to send simple melodies composed of a number of frequencies. They’ll transform a device meant to study the Northern Lights into an interstellar musical instrument.

And there’s still so much more METI would like to tell the universe about us. “How can you talk about altruism or kindness or other human qualities, and how do you build that up from math?” Matessa says. “It’s advanced storytelling using languages that any civilization can understand.” METI wants to compose as many messages in as many different sensory modalities as possible, in the hopes that one of them could start a meaningful conversation between worlds.