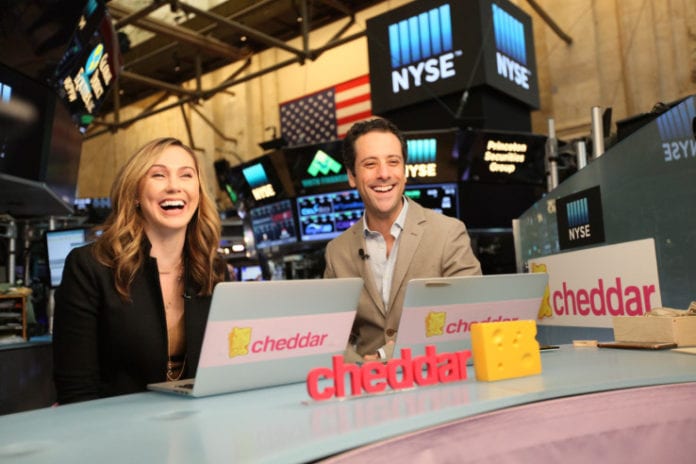 Business news network Cheddar has been partnering with social media platforms and OTT services in the U.S. And Cheddar is now looking at international markets. The media company is partnering with French startup Molotov so that French viewers can watch Cheddar from all their devices.

Cheddar first launched 18 months ago. Unlike many new media companies, the startup has been focusing on live video content. In other words, Cheddar is a TV channel that you can find on Sling TV, Amazon, Philo, Twitter, Pluto TV, 60 percent of smart TVs in the U.S., Vimeo and Facebook. It has raised over $30 million and covers tech, finance

So far, Molotov has been focusing on traditional TV channels, streaming dozens of channels live and on demand. Cheddar is a different beast as the company calls itself a “post-cable network.” This is the first sign that Molotov is willing to expand beyond traditional linear TV.

Cheddar founder and CEO Jon Steinberg told me that Molotov can access the feed without any licensing fee. However, Cheddar has been running brand-sponsored shows and brand integrations — those sponsored segments will still air on Molotov, and Cheddar is keeping the money. Cheddar plans to generate $11 million in revenue this year.

Molotov has more or less the same deal with basic cable networks. So far, the company can stream TF1’s or France 2’s live feeds for free, but French networks don’t split ad revenue with Molotov (it’s different when it comes to on-demand content).

It is a smart partnership as Molotov is already available on many devices and now claims to have more than 3 million monthly active users just 16 months after its launch and 7 months after reaching a million registered users. And there’s a reason why Molotov has been quite successful. The startup is defining the future of TV.

After creating an account, you can find all your content on all your devices. You just need to sign in with the same account. Molotov works on connected TVs from LG and Samsung, digital media players, such as Apple TV, Android TV-powered devices, smartphones, tablets and computers.

Using Molotov, you can watch live TV, start over from the beginning of a live show, play on-demand videos and bookmark your favorite content to store it in your cloud DVR. More importantly, browsing TV feels great, and I’ve never seen a better search feature when it comes to TV content.

You can stream dozens of channels with a free account and pay for premium channels and storage. The company plans to expand beyond France and become the only TV app you need.

While most channels are well-known French TV channels, Molotov already distributes CNN. More importantly, Molotov still needs to sign deals with TV networks in Europe in order to expand to new countries. Users in these new markets will have Cheddar content from day one.