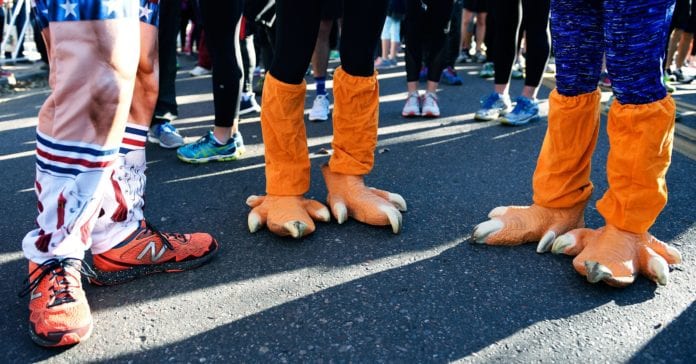 This Thanksgiving, you have a plan: You’ve signed up for a race. Nothing crazy, just a few miles, but what better way to offset the culinary onslaught of Turkey-day dinner than by torching a few calories first thing in the morning? That fourth slice of pumpkin pie isn’t going to eat itself, dammit, and you’re going to need somewhere to put it. So you’re going to run a turkey trot.

You and everyone else in the country. “Thanksgiving is the most popular running day in the US,” says Rich Harshbarger, CEO of the trade association Running USA. That’s according to race results from Athlinks, the largest results database in the world (if you’ve completed a race since the turn of the millennium, there’s probably a record of it on Athlinks, along with your official time, how you placed, and even what the weather was like on race day). And that popularity is only increasing: Last Thanksgiving, 961,882 people crossed a finish line at 726 local races across America—6 percent more than the previous year, and 18 percent more than the year before that.

In fact, more people run on Thanksgiving than any other day of the year, whether they’re racing or not. Users of Strava, the performance-tracking app, recorded nearly twice as many runs on Thanksgiving 2016 than the daily average. Imagine that: America’s most gluttonous day of the year is also its most active.

Which, of course, is fine and good and admirable. Exercise is great. Exercising with friends and family is even better. “The whole sport of running has become more and more social and less and less solitary in recent years—and that’s especially true of Turkey trots,” Harshbarger says. “I mean, when else are you gonna get a million people in the United States active at one time?”

But if you think running in a local footrace is going to do much of anything to make up for your day of feasting, you should know that the math just isn’t in your favor. The average woman burns about 126 calories per mile while running; the average man about 147. For a 5K (3.1-mile) race, that translates to 390 or 458 calories, respectively.

The average American consumes upwards of 4,500 calories on Thanksgiving. Forget 5Ks—that’s about 1,000 calories more than the average person burns running a marathon. I’m not trying to dissuade you or anything. Some exercise is better than no exercise. But calorically speaking, counterbalancing your holiday gluttony with a spot of prophylactic jogging is like bailing out a boat with a teaspoon.

It’s not all bad news, though. People do gain weight during the holidays, but not as much as you probably think. A 2000 study published in the New England Journal of Medicine found that test subjects gained an average of just 0.82 pounds between mid-November and early- to mid-January—yet those same test subjects thought they had gained four times as much weight as they actually had.

So no, your Turkey trot won’t make up for the culinary crimes you are about to commit against your body. But the repercussions for those crimes are probably less severe than you think. So just enjoy your race—and the company of one million other happy trotters.